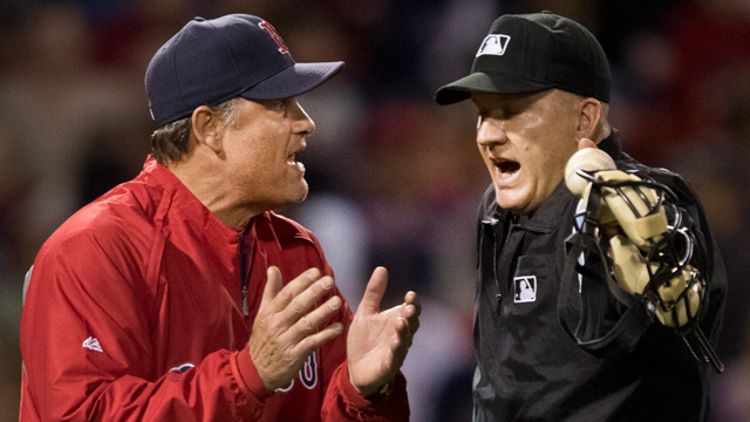 Baseball writers, as a population, tend to have a few hobbies in common. Not everyone’s the same, of course, but if you get a bunch in the same place, you can probably strike up a conversation about craft beer, or finding creative new ways to define “valuable” in order to make a point, or complaining about umpires.

Umpiring is immensely difficult — you have to make split-second decisions based on players and baseballs that are moving very quickly, often in different directions. And if you’re not right all the time, you have to contend with players and managers who are (1) more famous and popular than you, (2) better paid than you, and (3) able to make their case in the press in a way you can’t. Then there are the tens of thousands of live fans, the hundreds of thousands of fans watching on TV, and the millions who will be able to make up their own minds after watching slow-motion video from several camera angles. Umpires have no home stadium to play in and no fans to advocate for them, and it can be a lonely, demanding, thankless job.

They are going to make mistakes, and while their quality might improve with better training and incentives, we’re heading inexorably toward more instant replay, and every time an umpire doesn’t know who has the baseball, as happened Friday night in Seattle, we start to move down that path a little more quickly.

Major League Baseball, like most organizations that have money, tradition, and old white men at the highest levels of management, hates to change. MLB will recognize necessity, for sure, but it adapts with the foresight and alacrity of a rudderless battleship that’s answering bells for flank.

So when it happens, and instant replay is instituted for traps, fair/foul calls, and plays on the bases, here are the three things I care most about getting right — three things that MLB will probably screw up somehow:

Having a coach’s challenge puts the responsibility for getting calls right on the manager. Take it from an Eagles fan who’s spent the past decade watching Andy Reid try to operate a challenge flag — this is not always a good idea. Getting calls right isn’t the manager’s job, it’s the officials’ job. A limited coach’s challenge means a bad call in the ninth inning doesn’t get reviewed because the manager used up his challenges earlier in the game. Or alternatively, a call in the fourth inning doesn’t get reviewed because a manager is afraid he might need that challenge later in the game. It’s a headache that the managers themselves don’t need — they’re having a hard enough time figuring out that there’s no rule that says you can use your best relief pitcher only in a save situation.

2. Don’t put replays in the hands of the umpires on the field

I care more about this one than any other consideration. There are two problems with having the umpires review home run calls now. First, it puts people in a position where they have to admit they were wrong in front of those players, managers, and fans. Now, having to admit you’re wrong, publicly, potentially all the time, is tough, particularly when it’s a new thing and you’ve spent your entire professional career walking around with virtual impunity. Maybe this shouldn’t be a thing, and umpires should just grow up and get over it, but it is a thing and we’ve got to deal with it. So why run the risk of letting officials’ pride get in the way of getting the call right? Put the decision to review a play and whether to overturn a call in the hands of a fifth official, either in the press box or at some centralized replay headquarters. An umpiring NORAD, if you will.

The other advantage to doing replays this way is that we don’t have to get all four umpires together for a conclave, then have them all parade off the field to the clubhouse so they can huddle around one TV screen while the audience waits for white smoke. One person with a computer monitor and a remote control can straighten things out in less time than it takes for a TV audience to get bored watching those same replays. Take the burden off the umpires, give the crew chief an earpiece like the ones TV anchors and Secret Service agents get, and let everyone get on with their lives.

By the way, setting up a spot in the press box and hiring 15 new, full-time replay officials will probably cost a few million dollars a year, but Major League Baseball has its headquarters in Manhattan, home of the most expensive real estate in the country. In my world, nobody who chooses to rent office space in New York City instead of, say, Atlanta or St. Louis gets to cry poor and pinch pennies elsewhere.

3. If we’re going to review traps and fair/foul calls, we need to have hard-and-fast rules about where to put base runners

My copy editing professor in college had a saying: “Style is arbitrary, but not capricious.” If you’re in a line of work where you care about consistency, the consistent application of rules matters more than anything. So if you’re reading a newspaper that uses Associated Press style, you’re going to see “adviser” instead of “advisor” and “canceled” instead of “cancelled.” One spelling isn’t morally superior to the other, but a man’s got to have a code.

So if it comes to the point where we can reverse foul-line calls, what happens when there’s a runner on second and a ball down the right-field line gets called foul instead of fair? We could reverse the call, but short of discovering the ability to hop over to a different timeline in which the correct call was made in the first place, we don’t know where that runner on second would have ended up. Practically, if Jose Molina were running and Jason Heyward were in right field, the runner’s going to end up on a different base than if Mike Trout were on first and Delmon Young were in right. But interpreting the rules differently for Molina than for Trout is a headache nobody wants to contend with. I don’t care what the hard-and-fast rule would be in such a situation, but we absolutely must know what it is before it becomes an issue in the real world.

Those are the only things I care about if and when replay happens. I don’t care if we have live umpires or robots. I think suspending umpires for poor performance and making them answer to the media is less about getting calls right than it is about satisfying our inner apparatchik. We can have our pound of flesh, or we can have quick, accurately officiated games.

Or, as is likely going to be the case, we can continue to have neither.