99-Day NFL Warning: The Candidates for This Year’s Cowboys Scapegoat Are Already Piling Up 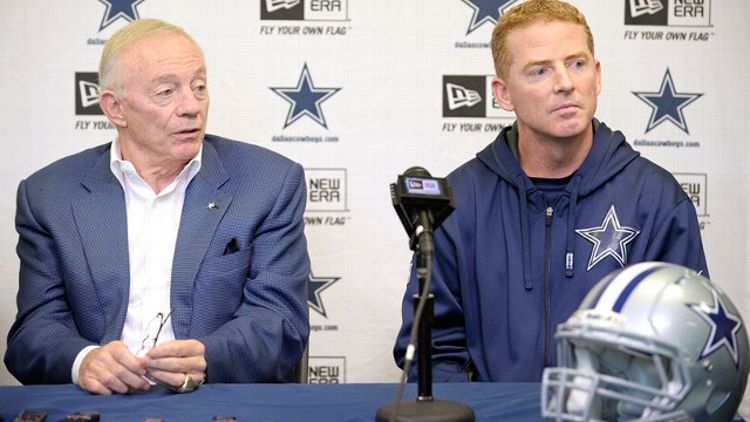 The panic button seems to be armed a little early this year at Valley Ranch. I mean, sure, when the Cowboys went 8-8 a year ago, someone had to go (that someone turned out to be defensive coordinator Rob Ryan), but at least the blame was handed down after Dallas missed the playoffs for the third straight year. Hell, even Wade Phillips got until November back in 2010. This year, it’s not even June, and it seems like people are already trying to find out who’s at fault for the 2013 Cowboys. And as long as they are, we might as well take a look at the candidates.

The obvious choice. Garrett’s statement yesterday that everyone “is playing and coaching for their jobs” is a not-so-veiled attempt at hinting that yeah, he knows he’s coaching for his. Four straight playoff-less seasons won’t be tolerated in Jerry’s World, and Garrett will probably be the first one out the door if Dallas stumbles.

At least with the second option, there’s the slightest chance that the blame can be deflected to whomever Garrett appoints, and that brings us to …

It’s been a rough year for Callahan. It started with Tim Brown accusing him of sabotaging the Super Bowl while Callahan was the head coach in Oakland, and now there’s a chance he gets the play-calling nod in Dallas and gets accused of sabotaging the Cowboys’ season.

“When you give somebody $100 million, then you would like to get every ounce of anything they can bring to the table to win a football game.” That is Jones being super subtle to NFL Network’s Albert Breer about what he expects from Romo. Romo’s massive new contract probably has something to do with it, but he’s already done a lot of apologizing this offseason. He’s cut back on his golf, made it clear that he only found out about needing surgery for a cyst in his back after signing his new deal, and let everyone know that he’s a better quarterback than his record shows.

I don’t know what Romo is so worried about. Cowboys’ fans have always been super forgiving of him, so I don’t see how being absurdly rich could change that.

The successor to the dearly departed Ryan, Kiffin is arriving to Dallas with a brand-new defensive scheme that should dramatically change how the Cowboys use their personnel. DeMarcus Ware has been one of the best defensive players in the NFL for the past five years, but now he’ll move from a 3-4 outside linebacker to a 4-3 defensive end. Sean Lee will transition to a true middle linebacker, and Dallas’s base defense will now require one more body from its already thin defensive line.

That shouldn’t be a problem. Kiffin is a legend with a track record of high-level NFL success. Nobody should be concerned that he’s 73 years old, hasn’t coached in the NFL since 2008, coordinated the 40th-ranked scoring defense in Division I last season, and was the pioneer of a defense that’s becoming less and less prevalent in the NFL. I’m sure none of that will come up if Peyton Manning throws for 430 yards in Week 5.

Jones has had a special year so far, even by his standards. To quickly review, he maintained that Dallas’s awful offensive line was fine because Romo is elusive, vowed to go down with the S.S. 2008 Cowboys Draft, and gave Romo $100 million.

Still, including Jones on this list seems like a futile exercise. He should probably be the scapegoat for the entire Romo era in Dallas — starting with the Roy Williams trade and ending with the Cowboys picking a first-round center with a third-round grade a month ago — but there isn’t much using in making him such. Jones has turned the Cowboys franchise into such a moneymaking machine that when Texas secedes, there’s a good chance he becomes king and they name the currency after him, but he’s turned the Cowboys roster into a top-heavy salary bloat that has kept Dallas out of the elite tier of the NFC. None of that matters, though — not while he’s still in charge. So take your pick of the others. My head says Garrett, but like it usually does, my heart is going with Romo.