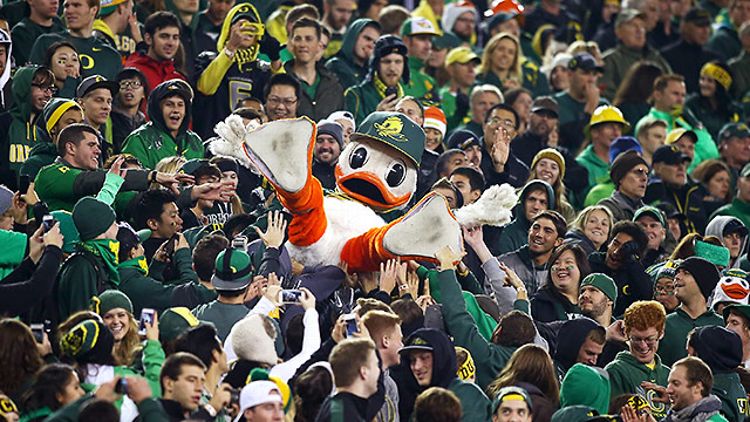 You may not be in the mood to hear this the morning after a Seneca Wallace–Josh McCown duel, but America is currently riding an unbroken streak of days blessed with televised football that stretches back to last Wednesday and continues through November 27. We live in amazing times, and are particularly blessed in Week 11 of the college football season, which features the return of Tuesday #MACtion and eight total weeknight games, including two top-10 contests on Thursday. We’re sure you have so many questions. We’re here to help.

• What information do I, the discerning consumer, require in order to consume this game? The Falcons and RedHawks kick off in Oxford’s Yager Stadium Tuesday night at 8 p.m. ET. The game will be televised on ESPNU and streamed on WatchESPN.

• For what or whom should I be watching? A punishing shutout. The Falcons’ defense is allowing a parsimonious average of 18.5 points per game; the RedHawks rank dead last in the FBS when it comes to scoring, averaging 10.9. Dead last means worse than Florida International, right? Turns out that’s possible! But haven’t we been surprised before by Tuesday MACtion firefights? Isn’t that, like, MACtion’s thing? We have, but Miami is winless in 2013 and that’s highly unlikely to change here. If you’re looking for a zero-win team with a shot at putting one in the W column, check in with Southern Miss at 3-5 Louisiana Tech Saturday night at seven.

• What’s at stake here? At 5-3 overall, Bowling Green can move into bowl eligibility with a win. And with just one conference loss this season, the Falcons are still technically in the thick of the MAC East race.

• What information do I, the discerning consumer, require in order to consume this game? The Bobcats and Bulls kick off in Buffalo’s UB Stadium Tuesday night at 8 p.m. ET. The game will be televised on ESPN2 and streamed on WatchESPN.

• What’s at stake here? These are the other two teams at the top of the MAC East; behind Buffalo, Ohio, and Bowling Green, the next-closest teams have four conference losses. One of the schools you’ll see playing Tuesday night is going to Detroit. Buffalo is the only division squad undefeated in league play; Ohio shares a 6-2 overall record but got dinged with a loss to Central Michigan a couple weeks back. Who loses to Central Michigan? Right? Speaking of which:

• What information do I, the discerning consumer, require in order to consume this game? The Chippewas and Cardinals kick off in Muncie’s Scheumann Stadium at 8 p.m. ET on Wednesday. The game will be televised on ESPN2 and streamed on WatchESPN.

• For what or whom should I be watching? Who loses to Central Michigan? Probably not Ball State. The Cardinals are 8-1 and undefeated in MACtion, with only a respectable loss to North Texas marring an otherwise perfect record. The Chippewas are not good at football. Ball State’s Keith Wenning snapped a season-long streak of throwing for at least 300 yards in every game last week at Akron, with a paltry 240 on 25 completions. Expect him to start a new streak this week.

• What’s at stake here? The division-leading tie in the MAC West. Ball State currently shares the top spot with undefeated Northern Illinois, and had best not enter that November 13 game with the Huskies with a loss.

• What information do I, the discerning consumer, require in order to consume this game? The Trojans and Ragin’ Cajuns kick off Thursday at 7:30 p.m. ET at Lafayette’s Cajun Field. The game will be televised on ESPNU and streamed on WatchESPN. If you’re going, be advised that the Cajuns have declared this a “White Out” game, so wear your snowy best. How is wearing white to an event that may include pregaming with a bunch of Cajuns a good plan? Easy solution: The first time you get hot sauce spilled down the front of your shirt, remove it immediately and fold the shirt together, mashing the stain against itself. Unfold and repeat as necessary until the splotch resembles a reasonable facsimile of the outline of a crawfish. Instant custom game-day wear!

• For what or whom should I be watching? The ground game. Troy has managed a fair amount of success against the run this year, and the Cajuns boast an outstanding rushing tandem in junior Alonzo Harris and freshman Elijah McGuire, in addition to quarterback Terrance Broadway. Why is that name familiar? Broadway was the guy thrown into action as a true freshman for Houston when Case Keenum and Cotton Turner both went down at UCLA, lo these many years ago. He transferred to Louisiana in 2011.

• What’s at stake here? Louisiana’s stranglehold on the Sun Belt. The Cajuns have a two-game lead on the next-closest squad, Louisiana-Monroe. The Warhawks and Trojans are the Cajuns’ only remaining regular-season opponents with winning records. Meanwhile, a win in Lafayette would get the Trojans to bowl eligibility.

• What information do I, the discerning consumer, require in order to consume this game? The 10th-ranked Sooners and the sixth-ranked Bears kick off at 7:30 p.m. at Floyd Casey Stadium in Waco. The game will be televised on Fox Sports 1.

• For what or whom should I be watching? Finally, blessedly, one way or another, the demise of the BUT BAYLOR AIN’T PLAYED NOBODY, PAAAOWL meme. After mowing down vastly overmatched teams from the FCS (Wofford, 69-3), the MAC (Buffalo, 70-13), and the Sun Belt (Louisiana-Monroe, 70-7), obliterating a cluster of flailing Big 12 rivals (West Virginia, Iowa State, and Kansas by a combined score of 203-63), and surviving one close game at Kansas State, the Bears now enter the fun part of the Big 12 schedule. “Fun,” in this case, means fun for you and us, as we watch every ranked team in the conference tangle with every other ranked team for the rest of the month. Baylor’s draw: no. 10 Oklahoma, no. 25 Texas Tech, at no. 14 Oklahoma State, a relative breather at TCU, and a highly intriguing regular-season finale versus Texas. The Sooners played an integral role in what we may as well call the onset of Big 12 play last Saturday, defeating then–no. 10 Texas Tech 38-30, and will get their own virtual bye at home versus Iowa State in Week 12 before closing out the season at Kansas State and at Oklahoma State. Don’t touch that dial.

The marquee players, at this point, need no introduction. One of our midseason That Guys, Bryce Petty, could play his way into a Heisman-ceremony invitation this month, with competition from teammate Lache Seastrunk. The Bears will have a 1,000-yard rusher in Seastrunk and two 1,000-yard receivers in Antwan Goodley and Tevin Reese before very much longer. Baylor has a defense that has been aces at keeping opposing offenses from taking advantage of the many, many possessions afforded them, allowing an average of 4.17 yards per play and under 16 points per game, and is about to face the best rushing personnel the Bears have seen all season. Baylor leads the nation in scoring with an average of more than nine touchdowns per game. Oklahoma is allowing fewer than 19 points per game. Something’s going boom in a big damn way.

• What’s at stake here? Just Baylor’s undefeated record and potential national title bid. And Oklahoma’s viability as a Big 12 title candidate, should everybody in the conference start losing to everybody else in the conference in just the right way. Again, the dial: Do not touch it.

• What information do I, the discerning consumer, require in order to consume this game? The third-ranked Ducks and fifth-ranked Cardinal kick off at 9 p.m. ET at Stanford’s Stanford Stadium. How did the stadium get its name? Nobody likes a smartass, dear reader. The game will be televised on ESPN and streamed on WatchESPN. Why in the name of all we hold shouty is this game being played on the same night as OU-BU? Why should we have to make this choice? Dionysus is cruel, and DVR is your friend, and at least these games don’t overlap completely.

• For what or whom should I be watching? Parallels! Oregon, like Baylor, is fast, lethally efficient, highly underrated on defense, derided in certain corners of the sporting punditry for not playing boring-ass old-guy football, and has been obliterating all comers to a greater degree even than the Bears. No 10-point wins for these contenders in sight; Washington came closest and still lost 45-24. The Ducks’ highest-ranked opponent of the season so far, then–no. 12 UCLA, lost 42-14 in Eugene. Unlike Baylor, Oregon doesn’t have another really high-profile game after this one, but will, winning record permitting, have the Pac-12 championship game in which to showcase its talents one more time before bowl selection.

The Ducks are led by sophomore quarterback and Heisman front-runner Marcus Mariota, who can beat you, whoever you are, with his arm, legs, and probably his pancreas if it could hold a football. (It’s Marcus Mariota’s pancreas. Of course it can hold a football.) They have four players, including Mariota, with at least 50 carries and at least seven touchdowns each, and two receivers who’ll threaten the 1,000-yard mark this regular season. The Cardinal, with only a profoundly weird loss to Utah between them and a shared 8-0 record with the Ducks, field a defense that has caused more hangovers in the Pac-12 than a Red Bull–vodka–champagne Solo cup concoction. Start making your Friday sick-day plans now; even if you switch over from the Big 12 game and watch the whole thing in real time, this one’s going late.

• What’s at stake here? First place in the Pac-12 North and a high likelihood of staying there, given the remaining schedules for both teams. Also, Oregon’s undefeated record and BCS title game aspirations. Take heart, however: The loser likely falls no further than the Rose Bowl.

No. 20 Louisville at UConn

• What information do I, the discerning consumer, require in order to consume this game? The Cardinals and Huskies kick off at 8:30 p.m. ET on Friday at Hartford’s Rentschler Field. The game will be televised on ESPN2 and streamed on WatchESPN.

• For what or whom should I be watching? If you’re a pregnant woman, a nursing mother, over 65, under 13, or have a history of heart, neck, or back problems, you shouldn’t watch at all. This is going to be grisly. So very, very grisly. You don’t need us to tell you that Louisville has Teddy Bridgewater and Connecticut has zero wins and fired its coach in September, or that the Cardinals are probably still mad after losing to Central Florida the last time they played a weeknight game.

• What’s at stake here? Nothing, really. Louisville, with just the one loss, could still snake the AAC’s BCS bid if the Knights go into a November skid, but it’s not like the Huskies are a threat to the Cardinals’ 3-1 conference record. And the game’s in Connecticut, so it’s not like we can even make pizza jokes. Pass.

• What information do I, the discerning consumer, require in order to consume this game? The Falcons and Lobos kick off Friday at 9 p.m. in Albuquerque’s University Stadium. The game will be televised on ESPNU and streamed on WatchESPN.

• For what or whom should I be watching? Yards on the ground, everywhere. Air Force and New Mexico boast two of the very most grass-happy rushing attacks in the FBS, and neither one of them can defend anything. Run! Everybody! Run! LOLZ but they’re the Air Force! We promise you, they really have heard it all over there. MAYBE IF THEY HAD PLANES! That one too.

• What’s at stake here? The loser will be the last team in the division without a conference win. THIS IS THE SADDEST POSSIBLE FRIDAY OF FOOTBALL. It really, really is. What’s the first noon game that will perk us up on Saturday? Just hang on until Penn State kicks off at Minnesota at noon.

This article has been updated to reflect an incorrect reference to Ohio University as the Wildcats.

We Went There: A Bears Fan's First Trip to Lambeau