What a Difference a Play Makes for the Packers’ Playoff Picture 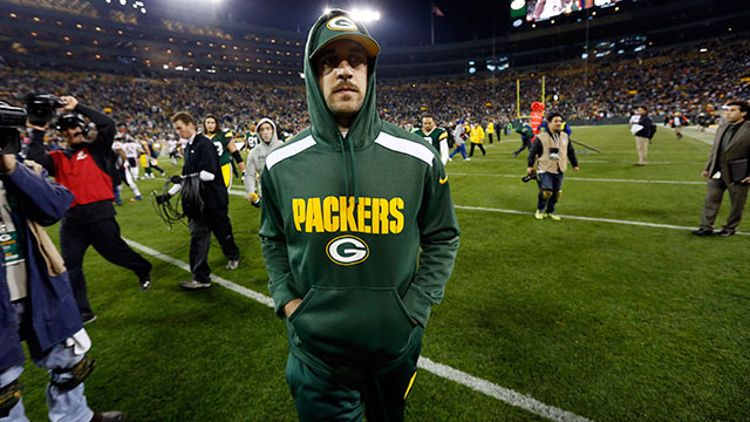 Although it took an MRI on Tuesday to diagnose it, Aaron Rodgers suffered a fractured collarbone in the opening quarter of Monday Night Football against the Bears last night. It’s a serious injury that throws the NFC — and quite possibly the Packers — into disarray.

First, the injury itself: Reports have Rodgers’s injury as a small fracture of his clavicle, which seems obvious for a number of reasons. Rodgers’s reaction was relatively muted; contrast that to the reaction of Tony Romo to his broken collarbone from October 2010. I’m not bringing that up to imply that Rodgers is somehow tougher than Romo, but instead to illustrate the relative impact of the hits and the likely severity of the injury. Had it been a more substantial fracture, as was the case with Romo’s season-ending hit, it likely would have been clear from the beginning. We would have likely seen Rodgers in a sling (or, more likely, he wouldn’t have come back out to stand on the sidelines), and surgery would be scheduled. Reports have suggested that Rodgers will not need surgery.

The best-case scenario for a Rodgers return is about four weeks. Troy Aikman suffered a broken collarbone in 1998 and came back after missing a total of six weeks, including five games and a bye week. Elvis Grbac suffered a fractured collarbone the previous year and was originally expected to miss a minimum of a month, but didn’t play a full game for two months afterward. The Grbac story has a telling quote from Dr. Lewis Rosenblatt: “It will be six to eight weeks until the collarbone really heals good. I can’t imagine doing anything before four weeks with a broken collarbone.”

Green Bay has already gone through its bye week, so every week Rodgers sits will be another missed contest. I’m sure that the Packers would love for Rodgers to return on Thanksgiving Day for their matchup in Detroit against the Lions, but that would be 24 days after his injury, which seems unlikely. The earliest that Packers fans will likely see Rodgers back on the field would be December 8 against the Falcons in Lambeau. A more likely return date would be the following week, when the Packers travel to Dallas to face the Cowboys in what could be a very meaningful matchup.

There’s no time where the Packers can ever afford to be without their star quarterback, but this was a particularly tough time for Green Bay to lose Rodgers. The Packers are incredibly banged up on both sides of the ball, with Jermichael Finley, Randall Cobb, and Clay Matthews, among others, injured and inactive for the loss to the Bears. The Packers are always going to be a deep team with Ted Thompson at the helm, but they just don’t have the horses to replace those three stars.

They’ve also been wildly unprepared for a Rodgers injury since Matt Flynn left town. The Packers cycled through quarterbacks over the past year, but the options of B.J. Coleman, Graham Harrell, Vince Young, and new starter Seneca Wallace were always going to be desperate replacements. Wallace will look better next week with a full series of practices alongside the first team — my estimate from the past in looking at quarterback performance is that passers perform 8 to 10 percent better as starters than they do during the same season as backups — but he’s still a well-below-average passer who has likely lost some athleticism at 33.

Flynn, as it turns out, might end up getting his job back. The Raiders released him earlier this season, and in October he was signed by the Bills as quarterback depth. Flynn didn’t throw a pass for the Bills before they released him … the morning of the Rodgers injury. That seems like great timing, but slow down. Flynn will need to pass through waivers unclaimed for the Packers to acquire their former backup, or the Packers will need to be the team who wins their waiver claim on Flynn. And that may not be the case.

Waiver priority in the NFL travels in reverse order of NFL team records. The Packers are 5-3, which means that any team interested in Flynn could claim him and keep him from Green Bay. The two teams that would be most motivated to claim Flynn and prevent the Packers from getting their old quarterback in town are the Bears and Lions … who are also 5-3. The tiebreaker for waiver order is toughest strength of schedule. The Lions’ opponents have gone 33-34 (.492) this year. Chicago’s opponents are 30-35 (.461). And Green Bay’s opposition has produced a combined win-loss record of … 33-32 (.507). So if there’s any silver lining in losing to the Bears last night, it’s that the Packers will have waiver priority on Flynn ahead of their NFC North brethren. If they don’t re-sign Flynn, it wouldn’t be surprising to see the Packers call up Young, who already knows some of the playbook after suiting up for Green Bay during the preseason. With just two quarterbacks on the active roster, the Packers will need to add somebody to back up Wallace this week.

The injury drastically opens up the NFC North, which now has those three teams tied at 5-3 with half a season to go. Green Bay would have been the favorites with a half-season to go and Rodgers healthy, especially considering that they already held the tiebreaker over Detroit and faced an easy second-half schedule. Now, given Detroit’s own smooth schedule (fourth-easiest in the NFL) and healthy quarterback, the Lions have to be considered the favorites to win the NFC North. They have a shot at regaining the tiebreaker in the NFC North with a victory over Green Bay on Thanksgiving, and if Rodgers isn’t active for that game, the Lions will likely be comfortable favorites.

If anything, the Rodgers injury makes another quarterback’s return from injury that much more important. Reports have already suggested that Bears signal-caller Jay Cutler is planning on attempting to return from his groin injury for this Sunday’s matchup against the Lions, a game that now holds incredible importance for the NFC North race. That matchup was already going to be one to watch, but with the Rodgers injury, it could become the game that decides the division. If the Bears lose, they’ll be one game out in the standings, having lost the head-to-head tiebreaker to the Lions, who will also then likely finish with a stronger divisional record than Chicago. If the Bears win, the Lions will very possibly struggle to beat either the Packers or the Bears in terms of the divisional tiebreaker, meaning that they would instead have to qualify as a wild card. The Bears got a lot out of Josh McCown on Monday night, but they’ll be hoping Cutler is active at home on Sunday.

If the Rodgers injury does push Green Bay into the wild-card reckoning, that counts as a lucky break for Romo and his Cowboys. Dallas’s heartbreaking loss to Detroit in Week 8 meant that the Lions would win any tiebreaker with the Cowboys for a wild-card spot, were the Cowboys to come up short in the NFC East. If the Lions win the NFC North, their win over the Cowboys won’t affect Dallas’s hopes. Instead, the Cowboys can win a tiebreaker over the Packers by beating them in Week 15 and claim one over the Bears by beating Chicago the previous week. The Packers also lost to the 49ers and beat Washington, something to keep in mind if either of those teams are involved in the wild-card hunt.

In all likelihood, the NFC has six playoff seats for eight likely contenders: the Packers, Bears, Lions, Saints, Panthers, 49ers, Seahawks, and an NFC East representative. That assumes that there’s no run coming from the bottom like the one 3-6 Washington pulled off a year ago. Before Monday, it seemed all but sure that the Packers would dispatch the Bears, pull two games ahead of them in the standings at 6-2, and basically assure themselves that they would end up somewhere in the NFC playoffs, if not necessarily atop the NFC North. Now? The Bears are still in it, the North is wide open, and Green Bay’s clear path to the playoffs has disappeared.