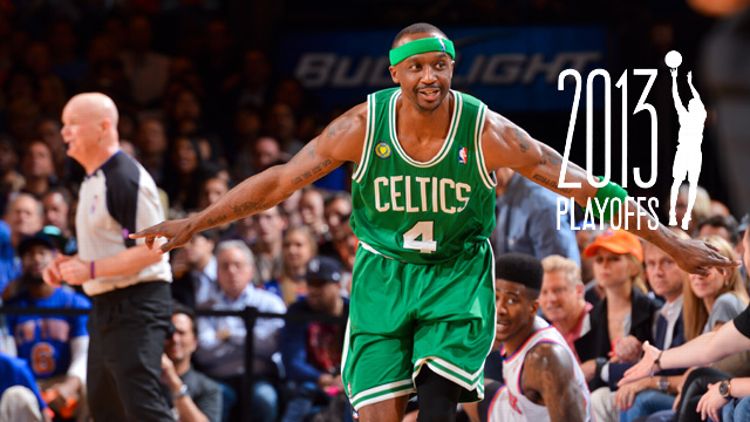 Minutes after Boston held on for a 92-86 win against the Knicks — nudging the series to 3-2 and squeezing out at least one more home game this season — the Celtics were back in the visitor’s locker room at MSG, breaking down a little dustup. At the end of the game, Jordan Crawford, who hadn’t played a minute, got into it with Carmelo Anthony; fellow DNP’er D.J. White held him back, more or less, while Raymond Felton popped up to slang some words as well. The Internet has already come to a conclusion as to what Crawford said, and, well, it’s not pretty. Let’s just say the comments are in line with, but lack the subtlety of, Kevin Garnett’s famed Honey Nut Cheerios monologue.

“My homeys already texted me like, ‘You ’bout to scrap!’” White said, pulling up his pants while checking his phone. Then, to Crawford in the locker over, good-naturedly: “You started it, and you dipped!” Terrence Williams, who played a surprisingly solid 17 minutes at point guard, piped up: “Q[uentin Richardson] always comin’ in. Where he come from?” And White, by way of cosigning Williams’s disapproval of Richardson’s behavior: “Yeah, with his E.T.-lookin’ ass.” Meanwhile, Rajon Rondo was off to the side eating Chinese takeout, and Avery Bradley just tried to stay moisturized: “Yo, J.C., let me fuck with that lotion.” Crawford didn’t notice, busy getting dressed. (His ensemble included, I swear to God, a different pair of weed socks than the ones he had on the other day. In his defense, Hot Topic does tend to sell novelty socks in pairs.) Williams tried to offer him some alternate lotion, but Bradley stayed firm. “Nah, I’ma fuck with that lotion right there.”

Before the game, not much levity was emanating from the Boston camp. The Knicks had come dressed in all black, for the, uh, Celtics’ funeral. (Paul Pierce, at the pregame shootaround, took pains to point out that this was only a figurative funeral: “This is basketball. I’m not going to be dead after the game.”) And as JV-soccer-team-building-exercise-y as that sounded, it was in line with the common wisdom, which held that Game 4 was an aberration; with J.R. Smith back, this thing would be over and done with. Then the Knicks shot out to an 11-0 start, and things looked dire. I tried to distract myself with the celebrity attendee roster/cheat sheet tacked up in the press room: “Al Roker: 7x Daytime Emmy Award Winning Weather Forecaster; Nikolai Fraiture: The Strokes – Bass Player.”

By the third quarter, though, Jason Terry had found the temerity to bust out the JET wings not once but twice, and J.R. — looking like he’d spent his league-mandated time off getting really baked and watching Gandhi — couldn’t hit anything. Meanwhile, the blood was boiling, with Kenyon Martin karate-chopping Garnett on his way to a quickly revoked flagrant 1. This was getting good and testy.

And then, in the fourth, Jeff Green. First, a cram over basically the entire city of New York, to put Boston up 15, with nine minutes to go. Then, as the lead — this being the 2012-13 Boston Celtics and all — inevitably dwindled back down, a couple of his bang-bang 3s staved off the comeback. Terry, against all odds, continued to look sentient, KG hit one last jumper with Chandler in the air, and that was it.

In the postgame interview, KG went HAM: scrap, and heart, and hard hats, and nails, and hammers, and scrappiness, and even more scrap, and annnyttthiiing is poosssiiblleeee. Even better was Kevin explaining, with a straight face, how “it’s important not to fall into that” — “that,” being jawing with the Knicks. Kevin Garnett! Says no jawing?! This is nothing if not masterful psychological manipulation.

J.R. broke character, too, going weirdly humble, without losing his facility for wordplay: “We dressed like we were going to a funeral. We ended up getting buried.” At the podium, Felton and Anthony, the all-black outfits now just kind of awkward, tried their best to remind everyone the Knicks were still up 3-2, still almost definitely winning this series. Ray: “J.R.’ll be fine. Everyone’ll be fine.” Melo: “We good. We good.” Oh, and what was it that the honorable gentleman Jordan Crawford said back there, Melo? “I’m not thinking about no Jordan Crawford. Not at this point in time, tell you that much.” Dramatic pause. “I don’t think he deserves for you to be typing right now.”

Back in the Celtics’ locker room a media scrum developed, probably for the first time ever, around Terrence Williams. His didn’t have great numbers, but Doc Rivers is basically going with a six-man-plus–“does anyone else here know how to dribble a basketball” rotation right now, and so Williams being able to move out of the Knicks’ backcourt pressure was huge. How? How did you perform this strange alchemy?! Enjoying the moment, Williams led off with “It sounds cliché but I know how to play basketball.” He got into specifics, about point guard prep with Doc, and about maintaining a pace. He said Rondo was sitting next to him on the bench, giving out pointers: “How to break down pressure. What to look for when I do break down pressure. When I pass the ball into Kevin, where to cut. Where [KG] likes the ball — no bounce passes, he likes them high. Everything.” And then, asked if he was comfortable out there — with the implicit question being “How could you have possibly been comfortable out there?” — Williams just said, with a smile: “Yeah. I like to play basketball.”