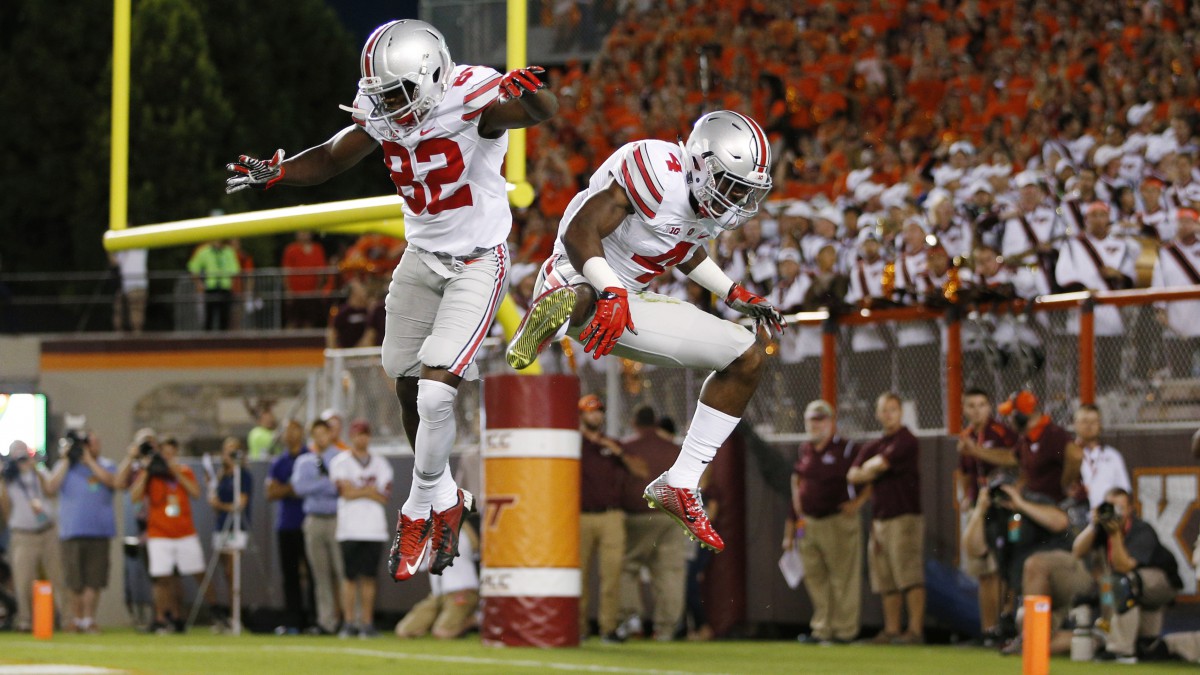 Before we all get to feeling either preemptively smug or prematurely bored with the 2015 playoff picture, let’s take a minute to review what, exactly, it is we know. Take some centering breaths, maybe watch that Vine of Cardale Jones twirling blissfully down the Buckeyes sideline in Blacksburg, and shake off any lingering vestige of certainty related to Ohio State’s chances at a repeat title run. Remember last winter, when then–no. 4 OSU was the last team into the bracket? Remember last fall, when a home loss to Virginia Tech torpedoed their ranking? Remember last week, and being convinced that Urban Meyer’s season debut would hinge around him trotting out J.T. Barrett and Ezekiel Elliott on the regular? Right.

And yet: Just because this 42-24 Buckeyes victory is the smallest possible sample size from which to project a season doesn’t mean those projections won’t be right. It might be too easy to get bowled over by the potential looming mayhem of Ohio State’s offensive shape-shifting capabilities. But that doesn’t mean swooning isn’t the correct reaction.

Meyer didn’t have a single bad choice in front of him when selecting from his three quarterbacks with starting experience, but that didn’t stop him from delaying and re-delaying the reveal with all the theatrics of a modestly skilled traveling magician. There was no starter named after fall camp, during game week, or even during pregame announcements in Lane Stadium. Barrett was the more widely expected choice, but the apparent indestructibility of Jones — roughly built like a fire hydrant composed of other, smaller fire hydrants — had obvious appeal to the guy who rode baby rhino Tim Tebow to a national championship.

His upside carries over to the fan. Here’s Cardale, completing a 20-yard pass to Michael Thomas while in the process of being hauled bodily to the ground by a VT defender. Here he is being chased and hit as he throws a 24-yard touchdown pass to Curtis Samuel, who (by the way) is being interfered with in the end zone and catches the ball as he’s falling down, for Ohio State’s first score of the night. Here’s a play that looks close enough to a sack for Hokie fans to stand up and cheer, only to see Cardale barrel out of it for a 14-yard gain. Here he goes again, fairly skipping out of a tackle and running 20 yards like it’s nothing, no small feat given that his running style was (accurately) described last year as “haunted downhill shopping cart.” Here he is improvising a 29-yard jump pass off his back foot while being hit … again.

All of which contributed to a nice leisurely evening for the presumed centerpieces of the Buckeyes’ opening-week attack. With just under 11 minutes remaining in the game, and a 35-17 lead, Barrett was brought in to put the quit in the Hokies, reeled off a 40-yard gain of his own, and followed that up with a 26-yard touchdown pass. A quiet night for Elliott, you might be forgiven for thinking, until you check the box score and realize that he had 122 rushing yards. (An 80-yard scoring run will do that to a stat line. It was a beautiful set piece of a score staged by an offensive line opening up a pristine boulevard for the title game MVP, smooth as a marching band changing formations.) You almost want to send him out there in his half-shirt and absorb the penalty yards, just to make things a little more sporting.

Lapses in memory as startling as forgetting Elliott’s score are made possible by the most dazzling star turn of the night, courtesy of the Buckeyes’ other other quarterback, the one playing in his first collegiate game as a receiver. Braxton Miller’s first catch of 2015 was a diving reception for 24 yards and a first-down conversion. The first substantial turning point for the Buckeyes came on a Miller catch from Jones, after which he (1) almost fell down, (2) almost stepped out of bounds, and (3) almost got tackled, managed not to do any of these things, and ran in to put OSU up 21-17 to stymie a VT rally. And neither of these plays is even the top spot on his highlight reel from the night.

The stadium went so quiet after that play that individual voices could be heard, including one man singing “Seven Nation Army” very loudly to himself, and another man begging that the first man be thrown out.

Miller didn’t even throw a pass the entire night. He can do that, too, remember? He caught, and he ran, and he slipped in and out of the physical plane around poor Corey Marshall, but he didn’t throw, and he can, and everybody remembers that, so there’s something else to keep the rest of the Big Ten up at night. Headed into this game, receiver was a position of concern for Ohio State, and the Buckeyes have filled it with a guy who’s also a threat to hop in at quarterback and throw a touchdown pass just anytime. Sleep tight!

And it’s still Week 1. Nobody’s here to crown the Buckeyes. Cardale Jones can be solved. But even if a given opponent can solve Jones, can that team also solve Miller, and Elliott, and Barrett, in who knows how many combinations, all on the same night? Because think about what coaching at this time of year means. It’s a lot of drilling into one’s team what the other team’s habits are, and how to react to those habits with instinctive muscle-memory habits of your own. But equally important is preparing them for the fact that when the game shows up, things might go completely differently. And look at how different, how variegated, Ohio State has shown itself to be, within the space of just four quarters. That’s going to throw off some teams, particularly young teams, heading forward, and make steadfast creature-of-habit coaches grind their back teeth to a fine powder.

It’s so close to impossible, so perennially improbable, to pull off back-to-back national championships. This Buckeyes team is fantastically equipped to do just that, but that doesn’t immunize them from having a deeply stupid Saturday along the way. The array of weapons is so broad it’s almost spiteful, but what’s really going to be maddening is if this team takes this arsenal and stumbles on the road to Glendale.

But even if they lose, guess what? This is still the most watchable team college football has going right now. Urbz could out-genius himself. Better offensive teams than the Hokies lie ahead. And Cardale’s still pretty green, when you look at his aggregate experience — but wouldn’t you rather watch him making shit up than just about anybody else doing what’s been drawn up?