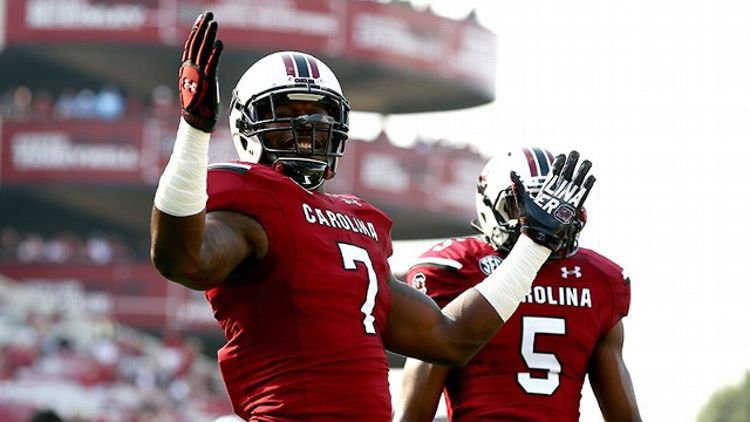 You already know that Week 1 college football games aren’t all that useful in the discerning sports fan’s quest to consume actual, compelling football. It’s helpful, the morning after Jadeveon Clowney’s tentative 2013 debut performance in a 27-10 win over North Carolina, to remember that Week 1 is also not all that useful for data extrapolation purposes. But that’s fine. It’s even natural. It’s fun to be able to take one data point and draw a line to anywhere.

So before we get too far ahead of ourselves, on barstools and in broadcast booths, by labeling Clowney’s junior season an early Heisman bust on the basis of one three-tackle outing, let’s take something away from his head coach’s postgame press conference.

A couple questions in, a reporter asked Steve Spurrier to elaborate on his thoughts regarding Clowney’s conditioning. The Head Ball Coach had mentioned in his opening remarks that he’d told Clowney, at the end of a lengthy weather delay, “You oughta be well-rested now.” Spurrier interrupted the reporter seeking to pin down the exact degree of the Gamecocks’ star player’s gassedness with this: “Well, did you watch what I was watching? I don’t have to say it. You write what you see.”

Far be it from us to disregard the will of the HBC.

We saw UNC’s offense run 79 plays and do everything it could to steer clear of engaging Clowney at all. South Carolina defensive coordinator Lorenzo Ward said afterward that UNC was the fastest team he’d ever seen, and that it’s difficult to simulate that kind of tempo in practice without playing against that type of offense all the time.

We sat in the press box, making it hard to tell from that many feet in the air how tired a guy looked, but we scanned every UNC offensive play, pre-snap, looking for no. 7. We noted his absences. We saw, on the TV monitor, the same shots you did: Clowney bent over, Clowney with his hands on his hips, Clowney on the sideline. We saw other players, including both starting quarterbacks, show ill effects from the oppressive heat and drenching humidity inside Williams-Brice Stadium.

We saw Clowney, at more than one point, almost politely brush off both Tar Heels players enthusiastically attempting to double-team him. We saw all of the Heels’ efforts and all 79 of their plays net them 293 yards, 10 points, and a loss.

We heard Ward say, “I don’t think it was just Clowney. I think the entire defense got winded.”

We saw no. 7 himself enter the interview room with his head high, in good spirits, and cheerfully announce that he was “ready for all the questions about the conditioning!” We heard him confess that he’d been up all night with a stomach virus, and that he’d eaten only a banana and a few grapes. We heard him say he was exhausted when the game began.

We have one piece of data. One point plotted. Next week we’ll have another, and we’ll be able to draw a tiny line segment. That line might not lead to New York for the Heisman Trophy ceremony. It might not end in Pasadena for the BCS title game. It might not even go through Atlanta for the SEC championship.

All we know, at the moment, is what Clowney looks like while operating on little sleep with a stomach full of fruit, in a godzillion-degree stadium, against the fastest opponents his defensive coordinator has ever seen. Don’t rush us to judge. Don’t rush yourselves to decide. And don’t rush Clowney, who still looks like he could eat any one of us like we’re so many mouthy corn dogs.

“We’re happy to beat them,” said Spurrier afterward. “Who knows how good they — or us — will be.