‘We Are Warriors’: Rios–Alvarado II a Spectacle of Heart and Skill 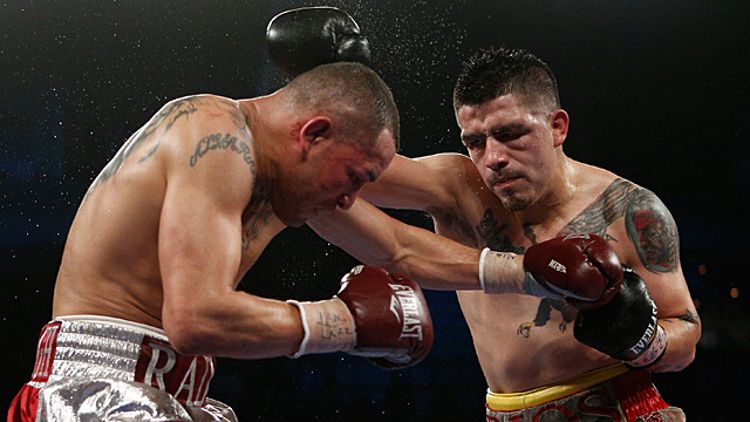 If boxing is sometimes stupid and always macho, there’s no better example of the magnetism of stupid macho than Brandon Rios. He is boxing’s early Ironclad, a slow-moving, indestructible and arguably ugly fighter who advances upon his opponents without a hint of subtlety or trickery. When he gets close, he blasts them to hell.

This is not to say that Rios is unskilled or lacking in intelligence, but his plodding feet and his static stance offend the eyes of fight fans who see boxing as a brutal, balletic act. His considerable popularity instead comes from his refusal to engage in anything but a brawl — there isn’t a fighter out there who enjoys getting punched in the face more than Rios. Guys like that tend to have short careers marked by epic bouts against other guys like that. After watching his first fight against Mike Alvarado from ringside, I didn’t think much of Rios’s chances as a legitimate pound-for-pound contender — sure, he was exciting and he certainly had the ability to put together tight, powerful combinations on the inside, but I couldn’t see him ever beating a fighter who could dictate the pace and the distance of the exchanges. It seemed that if you could just keep your cool and circle around Rios’s slow advance, you could win a pretty easy decision.

Before this past Saturday night, Alvarado seemed destined for a career as an opponent — a fighter just good enough to pair against more popular brawlers, but not nearly good or charismatic enough to headline his own events. His promoters must have felt similarly. At a media event for the first fight against Rios, I still recall standing next to Bob Arum, whose Top Rank company promoted the fight, and hearing Arum ask an employee if Alvarado and his cohort had left the gym. When the employee confirmed that Alvarado had departed, Arum chuckled sarcastically and said, “Good.” After Rios-Alvarado I, Alvarado’s billing got bumped up a little bit. He would still be an opponent, but he would at least be Rios’s opponent.

Well, he’s an opponent no longer. Rios-Alvarado II lived up to all the hype and delivered a violent 12-rounder that ended with both men screaming, “We’re all good!” and “We’re warriors!” at one another in the postfight interview. After losing in October, Alvarado admitted the buildup to the first fight had gotten in his head a bit. People were expecting a brawl and Alvarado felt compelled to follow through on his half. This time, he promised to box smarter and to use his jab and mobility to keep Rios at bay. And for the most part, that’s exactly what Alvarado did on Saturday night. He threw the kitchen sink of tricks at Rios — he switched stances on several occasions, circled to both the left and right, and fought backing up. When Rios got into range, Alvarado would square up his hips and press his thighs up against Rios’s legs and smother Rios’s arms. He didn’t look like Ali, Pernell Whitaker, or Roy Jones out there, but all that ugly movement hypnotized Rios into standing still. And when that happened, Alvarado bombed Rios with a quick, devastating overhand right.

A pattern quickly emerged after a hellacious second round in which Alvarado was almost dropped by a Rios jab. Rios would advance and advance, trying to cut Alvarado into a corner. Alvarado, for his part, would shimmy awkwardly on straight legs and switch stances. When Rios got inside, he pummeled Alvarado with the short uppercuts and hooks that have made him one of the best infighters in the sport. In the first fight, Alvarado punched through these exchanges, most of which he lost. On Saturday night, Alvarado punched back, but not quite as wildly. He didn’t quite get as good as he got, but he sure as hell let Rios know that he wouldn’t be busted up and intimidated.

That overhand right determined the rest of the fight. Alvarado landed it at will. Rios never adjusted his defense and seemed content to eventually run down Alvarado and beat him into submission. In the middle rounds of the fight, this strategy seemed like it would eventually work. Alvarado’s face, which was already cut from an unreported, but strongly suspected bar fight, looked like it was about to tear open at the seams, and his movement had slowed considerably. But at the end of each of those middle rounds, Alvarado would smack Rios again with the overhand right and throw combinations that stopped the stronger fighter in his tracks. By the last three rounds, Alvarado, peaking on the adrenaline of having fought the fight of his life, battered Rios with heavy combinations. When the fight was over, nobody should have had any doubt who had won, but I imagine there were quite a few people in Alvarado’s hometown of Denver who held their breath, hoping that the judges wouldn’t award the fight to the more popular and more marketable Rios.

After Michael Buffer announced that Alvarado had won by unanimous decision, Rios walked to the corner of the ring and held three fingers up in the air. For a fighter whose name had been floated around for super fights against Juan Manuel Marquez, Manny Pacquiao, and Adrien Broner, this seemed like a bit of a bad PR move. But Rios doesn’t seem to care too much about positioning and matchmaking — he is a man of his fans and understands they want to see him and his opponent get punched in the face at a roughly equal clip.

I’ll admit: The first Rios-Alvarado fight rubbed me the wrong way — it felt like both men had been instructed to stand flat-footed and throw haymakers until one of them dropped. The second fight, even by my own crotchety, contrarian standards, completely redeemed the first. By sticking to his game plan and by fighting smarter, Alvarado elevated a bloodbath into a highly competitive, brutal, yet completely stirring spectacle of heart and skill. And because there’s nobody who will bring all that out of Mike Alvarado better than Brandon Rios, let’s just go ahead and set the date for Rios–Alvarado III.

About Last Weekend: It's All About the Cardinals