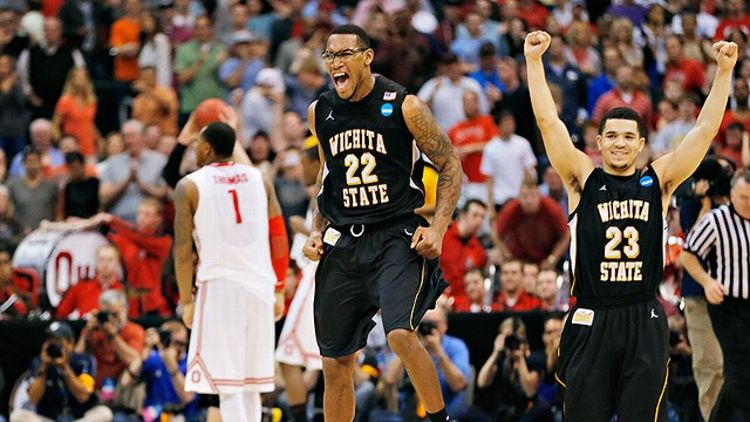 Malcolm Armstead was the first one up the ladder. The senior point guard, the one who’d outplayed Aaron Craft all afternoon, made his way up the steps, scissors in hand, and gave a wave to the Wichita State crowd. After the climb down, Armstead tied his prize — a three-inch piece of Staples Center nylon — around the strap in his backward hat, and making his way out the lane, blurted to no one in particular:

Questioned whether he actually believed that yet, Armstead said that for this team, he’d believe anything. “After everything we’ve been through,” Armstead said, “it’s real. From day one, just talking about the players and their life situations.” One of those situations belongs to Armstead — a transfer from Oregon who came to Wichita State without a scholarship and paid his own way by working part-time at a local car dealership. Carl Hall has his own story. Four years ago, a heart condition that caused more than one on-court collapse had forced him out of basketball. He didn’t play for two years, opting for a job on an assembly line in a light bulb factory in Georgia. Eventually, church league games gave him confidence to return to the real thing, and his performance at Northwest Florida State caused Wichita State coach Gregg Marshall to take notice. And now, both Hall and Armstead — and the rest of the Shockers — roamed the Staples Center floor, wearing T-shirts declaring them regional champions, under a scoreboard that read Wichita State 70, Ohio State 66. The Shockers were going to the Final Four.

Wichita State had jumped on the Buckeyes early. A two-point Shockers lead with 7:30 left in the first half grew to 10 with the help of back-to-back 3s from Tekele Cotton and Demetric Williams. The margin would remain double digits for more than 20 of the next 22 minutes. Early 3-point success helped build the lead (the Shockers were five of their first nine), but it was defense that sustained it. With a front line of the 6-foot-8 Cleanthony Early and the generously listed 6-8 Hall (“And that was before he cut his dreads,” associate head coach Chris Jans said). Wichita State’s main deficiency would seem to be its defense at the rim. But the Shockers packed the paint throughout the first half, and for the game, Hall sent back six Buckeye shots.

With eight minutes gone in the second half, the Shockers lead had ballooned to 20. Ohio State continued to settle for shots around the perimeter, and Craft, long considered a defensive star, met in Armstead a counterpart willing to match his physicality. Craft went 2-for-12 on the day, and his struggles exemplified the Buckeyes’. That’s about when Early fell to the floor.

Looking up for a defensive rebound, Early turned his ankle and immediately crumpled to the floor. Hall had already picked up his third foul early in the half, and without both him and Early, the Shockers were forced to go small. Ohio State finally took advantage. After a LaQuinton Ross 3 cut the lead to 17, the Buckeyes began attacking the rim on every possession. Ohio State took seven free throws in the first half. In the second, it took 22, and slowly, the lead began to fall away. When there wasn’t a layup or trip to the line to be had, Ohio State was grabbing offensive rebounds and putting them right back. Deshaun Thomas, who struggled throughout the first half, ended the game with 23 points.

When the deficit eventually hit 10, with just more than four minutes left, the Ohio State–dominant crowd made itself known for what seemed like the first time all game. Most of the lower bowl was in red, and with the Shockers taking the ball out on the side of the floor where most of it resided, each made basket and inbounds pass came with another degree of difficulty.

In the building, it felt like things had turned. The Shockers, who’d seemed so collected, so confident in their place all day, seemed shaken. Ohio State was scoring when it wanted to, and its defense had picked up to the point that nothing was coming easy for Wichita State. With 2:49 left, a pair of Shannon Scott free throws for Ohio State made it 62-59. That’s when Fred Van Vleet found Cotton open on the left wing, where the sophomore guard buried a 3 to put the Shockers back up six. It was the biggest shot of the game, and maybe the biggest in Wichita State history. The lead never fell below four again, and finally, a finish that had seemed inevitable just 10 minutes prior was in hand.

The Shockers had their celebration, but the feel of the postgame festivities wasn’t fit for a team headed to its first Final Four since 1965. Sure, there was a bit of disbelief. “Last year I was in D-3 juco, just watching this on TV, just watching it,” Early said. “Now I’m looking at a hat that says ‘Final Four Atlanta 2014’ with my team on it. That’s crazy.” But for the most part, the message was that this team wasn’t done.

Maybe it was how thoroughly they’d outplayed Ohio State all day, or that they’d already toppled the region’s no. 1 seed in Gonzaga. Whatever it was, it was clear that what happened on Saturday afternoon wasn’t enough. Armstead walked around the court with the game ball under his arm. “This is something special right here,” he said. “This is like the Space Jam ball right here.” Asked what that ball represented, Armstead didn’t flinch. “Just the start, man,” he said. “It’s just the start. Two more games — one at a time.”

Filed Under: Ohio State, Robert Mays, We Went there