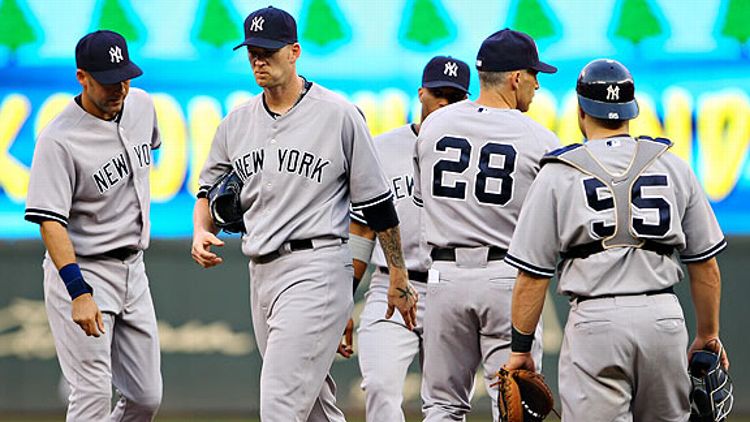 I fished my wish.

After rooting vigorously for A.J. Burnett to fail Saturday so that he might be removed from the rotation for the Greater Yankee Good, I watched it happen in technicolor. The villain of my imagination fared even worse than I could have hoped — 1 2/3 innings, five hits, three walks, two wild pitches, seven earned runs. The Yankees persisted, but the 7-0 deficit was far too much to overcome.

As expected, the experience of pulling against the team was odd and difficult, but the events that transpired in Minnesota went beyond some blogger’s temporarily perverted loyalties. This shit — and shit it was — descended into grotesque hyper-reality. Watching A.J. Burnett implode with his whole season at stake was like watching a twister destroy a farmhouse. If you ever happen to see something like that, take a moment and ask: “Does the twister care that I’m here? Does the farmhouse?”

A.J. Burnett is a man destined to feel the sharp edges of real life. Just look at him. Look at him again. And look at him smiling. Even when he’s wearing a happy expression, he’s got the detached rough humor of a man who knows how hard it hurts when the other shoe falls. And what is he? Is he trash? Is he a tattooed punk? Is he, like fellow Arkansas native Cliff Lee, a gruff backwoods renegade?

Whatever we call him, Saturday’s outing had to be the low point of an erratic career. When New York manager Joe Girardi ended the debacle and yanked him in the second, Burnett wore the same faraway stare Yankees fans have seen for three years. He may or may not have had some pointed words for Girardi, a topic of hot debate in the New York media, and Girardi may have had to follow him into the clubhouse to ask him to come back to the dugout. Judge for yourself:

From 1999 to 2007, Burnett was 69-66 with a 3.76 ERA. He was an above-average pitcher with Florida and Toronto, and then he turned heads in 2008 with a league-leading 231 strikeouts. By the other numbers, it wasn’t the best year of his career, but it was good enough to land him in New York with a hefty five-year, $82.5 million contract. Since then, he’s been an occasional genius with a chronic case of unreliability. It seems to get worse all the time, and at this point in the season his ERA is lower than it was at the same date last year, subverting the second-life narrative.

After Saturday’s game, a tenser-than-usual Girardi denied any spat, and Burnett followed suit. They claimed the brunt of their ire was reserved for the umpire, and that everything was peachy keen between manager and pitcher. Normally it pays to be skeptical of the hunky-dory retrospective version of events, but in this case it may hold water. Girardi’s words on the mound seemed to be directed toward home plate, and Burnett was adamant in support of his manager. “No matter how mad I get,” Burnett said, “that guy’s taken my back every day I’ve been here. No matter how bull-headed I’m going to be, I’m not going to say anything (like that) to him. Not me. No chance.”

With his shock of bleached blond hair hanging over his forehead, mumbling in his low Southern drawl, Burnett cut a sad figure. His demise might be good for the Yanks, at least this year, but it’s also a sort of minor personal tragedy.

A quirk in the Yankee schedule — a doubleheader against Baltimore this Saturday — will allow Girardi to stick with the six-man rotation for another week. A.J. is still scheduled to start Friday. After that, who knows. It’s hard to know much about Burnett. The understandable reserve of the man in the spotlight will keep us from learning what lies under the inscrutable exterior; from naming the fatal flaw that undermines a great talent.