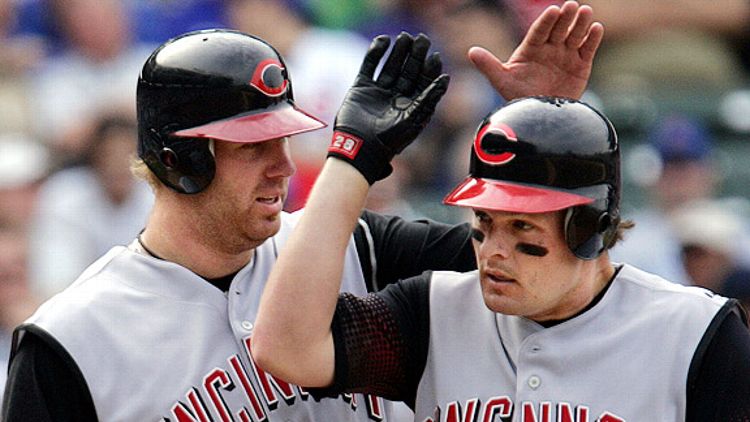 They had to fall like this — each in his own way, but still very much together. One has done so in almost inexplicable fashion, with his inability to put a ball in play reaching astonishing (and nearly humorous) levels. The other has tumbled more traditionally, through a series of injuries and stunted seasons and diminished production. When the Indians last week released outfielder Austin Kearns — who was hitting just .200 with two home runs for Cleveland — I could only think of Adam Dunn, once Kearns’ teammate, once one of the game’s most prolific home run hitters.

Dunn and Kearns will always be linked in the minds of those of us from Cincinnati who, nearly a decade ago, saw them as bookends for what was supposed to be the best outfield in baseball. Before Joey Votto and Jay Bruce, it was Kearns and Dunn — the duo that was supposed to help restore the Reds to championship form.

They arrived 13 years ago, when the Reds took Kearns with the seventh overall pick in the 1998 draft, and then selected Dunn in the second round. Back then, Reds general manager Jim Bowden seemed like the Midwestern version of Billy Beane — our own brash, mad genius who did the best with what he had.

And it was easy to believe in him. Dunn was a tall, incredibly strong young man when he arrived in 2001, with no foreshadow of the flabby oaf he would one day become. Kearns would be his counterpart, a coveted five-tool player. (Six-tool, if you counted his ability to make up for Dunn’s ineptitude in left field.)

Dunn would record 19 home runs and 43 RBIs in his first year with Cincinnati. Though less dynamic, Kearns hit 13 home runs in 107 games the following year, the Reds’ last season at Cinergy Field, where the franchise won three World Series championships and five pennants.

They were a good fit for the Reds’ new home, the Great American Ball Park. In these environs, Dunn didn’t have to cover much ground. Here, he could easily golf fastballs over the short fences or, if given the chance, aim for the banks of the Ohio River. Moreover, Dunn and Kearns looked liked they belonged here. They seemed fun-loving and perpetually unshaven, men who forgot to brush their hair, much less get it cut.

In the parlance of politics, Dunn and Kearns were identifiable icons, simple guys without a trace of the complexities and insight of players like Votto, who can often come off as an unknowable man. Watching the Reds during their tenure often felt like peering in on a rec softball game in central Illinois. A ticket bought you multiple home runs, lost fly balls, missed cut-off men with a modicum of fun. All that was missing was the keg at home plate.

Of course, there were signs it would never really work out. Dunn seemed to grow increasingly sluggish, while his strikeouts multiplied like Tribbles. Meanwhile, Kearns struggled to stay on the field, never living up to his initial promise.

The bad defense. The injuries. The listlessness. None of that would have mattered had they delivered, had they actually won. But from 2002 to 2006 (when Kearns was traded to the Washington Nationals) the Reds never won more than 80 games. Soon enough, it became clear that Adam Dunn and Austin Kearns were not Frank Robinson and Vada Pinson reborn. Far, far from it. The stars of the future had come to represent a god-awful present.

With Kearns peering at an uncertain future, Adam Dunn lives in a mystifying present. His statistics are so bad they were featured in The New York Times and mocked in the pages of The Onion. With this seemingly joint fall, those who follow the Reds are left to ask what to make of the Dunn-Kearns era. Having seen what they’ve become, Dunn and Kearns are no longer bantered about as “What ifs.” They are simply the symbols of a great era that never was.

Sridhar Pappu is the author of a forthcoming book on the 1968 baseball season, slated for release in Spring 2013 by Houghton Mifflin Harcourt. This is his first piece for Grantland.