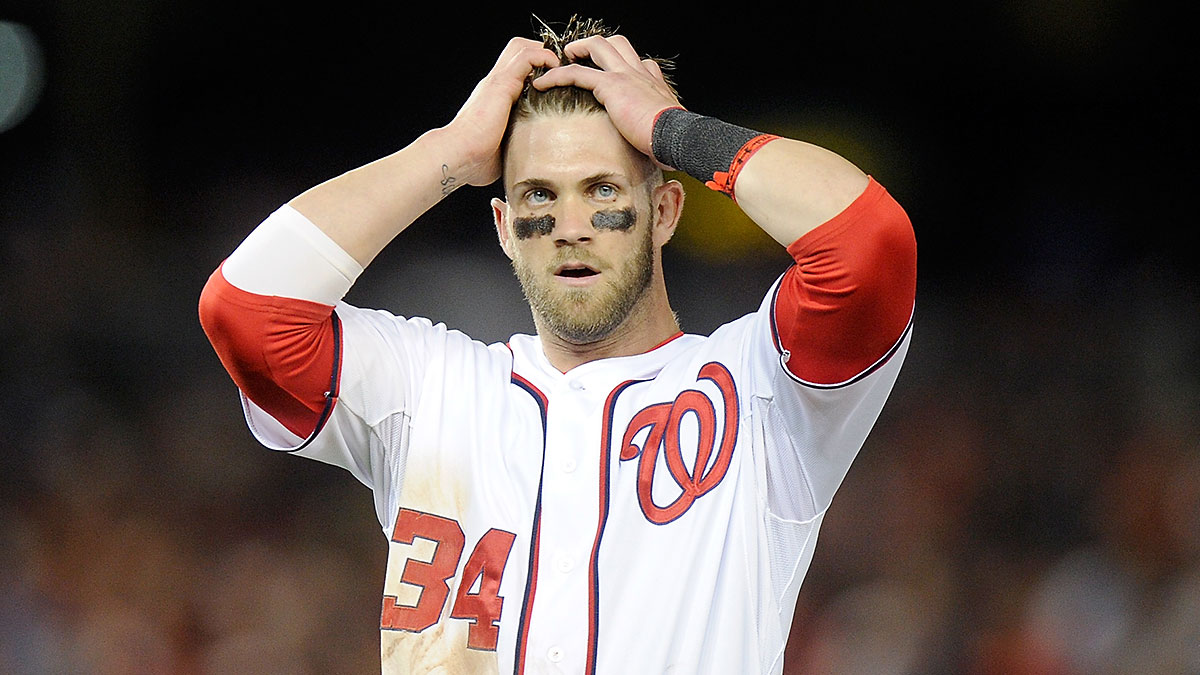 Bryce Harper has a knack for making headlines.

Upon returning from the disabled list in late June, the Nationals outfielder questioned manager Matt Williams’s decision to bat him sixth in the lineup. This past weekend, Harper pissed off Braves fans by dragging his foot over the team logo behind home plate.1 He recently triggered a heated interaction between Williams and local media over whether he should be sent to the minors. He even found a way to motivate (or at least sprinkle batted-ball luck on) a teammate, indirectly hinting that Denard Span should hit the bench, and somehow turning Span into one of the hottest players in baseball in the process.

All of those incidents could spark some interesting discussions. They also ignore the more troubling trend: Harper has played poorly this season, and compared to his historical peers — the other players who broke into the big leagues with a bang at a very young age — Harper’s Year 3 performance looks hugely out of place.

To properly frame how disappointing Harper’s 2014 season has been, we need to start by recognizing how extraordinary his 2012 season was. Harper debuted on April 28 and went on to deliver an excellent all-around campaign, hitting .270/.340/.477 with 22 homers, 18 steals, impressive defense, and a stream of highlight-reel plays. According to Baseball-Reference’s wins above replacement stat, he generated 5.1 wins with his all-around skills, ranking just outside the National League’s top 10. His .817 OPS adjusted for park effects netted a 118 OPS+, 18 percent above league average. All of which was enough to earn Harper NL Rookie of the Year honors.

Given the vagaries of defensive metrics, and the fact that Harper earned his megaprospect status primarily with his bat, we can use that OPS+ stat to gauge the impact of his 2012 season. Harper was just 19 that year. Now that we’re decades beyond the bonus baby era, which saw teams throw gobs of money at teenage prospects and then very quickly promote them to the major league level, it’s rare to see players in the big leagues before they turn 20. It’s even rarer to see someone perform as well as Harper did at such a young age. I queried Baseball-Reference’s Play Index to see which players 20 or younger put up the best numbers by OPS+, with a minimum of 500 plate appearances. Here are the top 25. Note: “OPS” is OPS+ in this case. 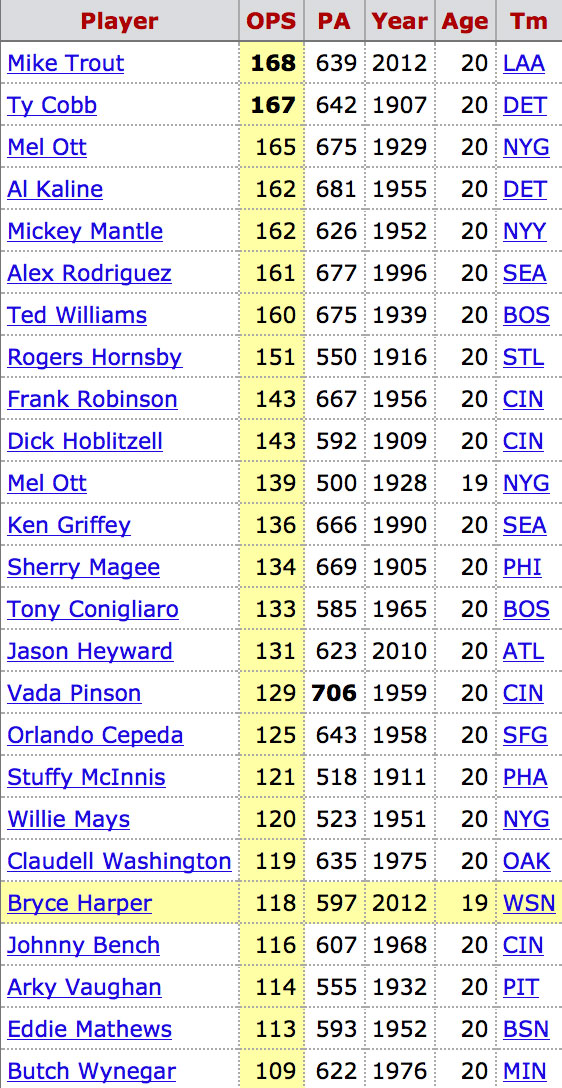 It turns out that what Harper did in 2012 wasn’t just rare; it was the second-greatest offensive performance ever for a player that young.

Now, just two years later, Harper is having the kind of down season that’s nearly unprecedented for anyone who broke in really young and performed as well or better than he did.

I wrote about Mike Trout’s incredible 2012 season in August of that year; he’s the standard-bearer for 20-or-younger players, and is currently in the midst of a third consecutive season in which he’d make an excellent MVP pick. Ty Cobb hit .350 as a 20-year-old in 1907 and only got better from there, batting a ludicrous .420 four years later. Mel Ott never again matched the 42 homers he hit in his age-20 season in 1929, but he remained one of the best hitters and most fearsome sluggers in the league every year for the next decade and a half. Ditto for Al Kaline, Mickey Mantle, Alex Rodriguez, and Ted Williams.2 Frank Robinson did see a modest drop in numbers during his third year, but he still cranked 31 homers and won a Gold Glove that season. And so on.

There are a few exceptions here. First baseman Dick Hoblitzell was born in 1888 and hit .308/.364/.418 as a 20-year-old in his first full big league season, but never again reached that level despite putting up above-average offensive numbers in his next five seasons. Tony Conigliaro was an offensive force through age 22, but a fastball to the face on August 18, 1967, derailed what could have been an incredible career.

Harper’s closest comp on this list, however, might be contemporary Jason Heyward. A 6-foot-5, 245-pound physical specimen, Heyward broke into the big leagues with a titanic three-run homer, setting the stage for an excellent rookie campaign in which he’d hit .277/.393/.456 with 18 homers, 91 walks, and an array of sparkling defensive plays. By advanced stats like WAR that factor in defense, Heyward has remained a tremendously valuable player, with the highlight-worthy clips to match. But he’s become a relatively pedestrian offensive player, with his home run numbers in particular drying up, a weird occurrence for someone that big and that talented.3

Still, when it comes to very young players who started their careers with a bang, none dropped off as dramatically by Year 3 as Harper has. Thanks to ESPN Stats & Info, we can track the full extent of Harper’s decline. And it’s not pretty.

First, let’s look at Harper’s strikeout rate and power numbers this season, as compared to 2012 and 2013. All stats in the below tables are current through Monday’s MLB action.4

Harper has struggled most this season against inside pitches. He’s failing to pull these balls as often, he’s hitting more of them on the ground, and he’s swinging through more pitches located in this zone. A total of 32.3 percent of his strikeouts have come on inside pitches this season, compared to only 21 percent in 2012 and 2013.

Inside pitches aren’t the only ones giving him fits this year. While Harper succeeded against pitches on the inner half before 2014, he’s now shown a persistent inability to do anything with pitches down and on the outer half. As the numbers below show, he’s ranked among the league’s worst in that category (out of 198 players who’ve seen at least 700 pitches) since the start of last season.

Breaking down Harper’s performance by situational splits reveals more struggles. He hit .341 with six homers on the first pitch in 2012. In 2013, he batted .388 with eight homers in that spot. Through Monday of this season, he was hitting just .242, with no home runs and one RBI on first pitches. And while numbers with runners in scoring position often vacillate even for some of the game’s best and most consistent players, the drop in Harper’s RISP line is ugly. He was batting .196 in those spots this year, compared to .282 in 2012 and .230 in 2013, and striking out in 34.5 percent of his plate appearances with runners in scoring position. Here’s a look at the highest strikeout rates with runners in scoring position among NL players with at least 50 plate appearances this season.

Finally, ESPN has a stat called hard-hit average, which tracks exactly what you’d think: the frequency with which a batter hits the ball hard. In his rookie season, Harper posted a hard-hit average of .226, placing him a solid 51st out of 144 qualified batters. Since then, that number has plummeted to .197 last season and .149 this season.

Despite all of that damning statistical evidence of decline, there remains one huge, mitigating factor that helps explain what’s happened to Harper this season: injuries. On April 25, Harper cracked a three-run triple, punctuating the feat with a head-first slide into third. But that slide resulted in a torn ulnar collateral ligament in his left thumb, an injury that knocked him out of the lineup for more than two months. At the time of the injury, Harper was hitting .289/.352/.422, solid numbers in today’s increasingly pitcher-friendly environment, even if they were a little short of the annual sky-high expectations that fans and pundits have for him. Since returning from the DL, however, Harper has been terrible. In 141 plate appearances spread over 36 games, he’s batted just .230, with a .329 on-base percentage and an anemic .352 slugging average. He’s hit just four homers in that span, and has posted a 36.1 percent strikeout rate that would lead the majors by a wide margin if prorated over the entire season.

There are two bits of positive spin here: The first is that Harper’s thumb has severely limited his productivity, the same way similar injuries did for top hitters like Dustin Pedroia and others. A return to health, whether this season or in 2015, would presumably allow Harper to better tap into his vast potential and become the hitting star and MVP candidate that the baseball world expects him to be. The second is that he might finally be turning things around. The above tables didn’t account for last night’s game, in which Harper smacked a two-run homer, his second in five games and sixth hit in that span.

Still, until Harper fully rediscovers his 2012 form, doubts will linger. We’ll wonder if his all-out playing style could result in more injuries, like when he smashed into the wall at Dodger Stadium last year, an incident that incredibly only cost him a couple of starts but could have been much worse. And we’ll wonder if anointing Harper as “Baseball’s Chosen One” when he was 16 years old might’ve been a case of way too much, way too soon.

He’s still just 21 years old, and he’s still on that OPS+ list with some of the greatest hitters of all time. The smart money’s still on Harper becoming a star, even if it doesn’t feel that way right now.

NFL Heroes: All the Humans (and Machines) That Make Football Great