Mike Trout’s Rookie Campaign Is History in the Making 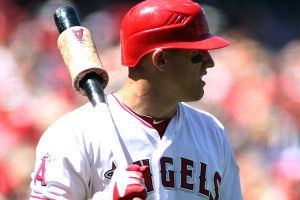 At first, it was a fun story. Twenty-year-old kid succeeds in the big leagues after a brief teenage cameo a year earlier. Then it was a tandem story — two outrageously talented, outrageously young rookies setting the baseball world ablaze. Then we started checking the history books. How many past rookie classes compared to the one we were watching?

It’s time to recalibrate, again. For this year, at least, Mike Trout has blown by Bryce Harper. He is in the midst of one of the greatest rookie seasons of all time. He’s doing things virtually no one his age has done before. He might already be the best player in the game. And if he keeps up this pace, we might soon be able to say this: On a per-game basis, he’s putting up one of the greatest performances by any player, of any age, ever.

First, the obligatory caveats. Trout has played in just 88 games this season. He’s got nearly two months left for his numbers to cool off. The smart money should be on some kind of regression. Trout hasn’t slumped, hasn’t suffered anything close to a significant injury, and is carrying a .398 batting average on balls in play. Everything that could have gone right so far, has.

All right, we good? Let’s dive in.

Trout turned 21 on Tuesday. He leads the American League in batting average (.346), runs scored (87), and stolen bases (36). He ranks second in slugging average (.602), first in Weighted Runs Created Plus (185), and first in Wins Above Replacement (7.1, per Baseball-Reference.com). He’s stolen 27 bases in a row, an Angels franchise record. He’s hitting .346/.409/.601, good for an OPS of 1.010 that would be the second-best by a rookie in 55 years, trailing only Albert Pujols’s 1.013 in 2001. Only three players in baseball ever stole more bases before their 21st birthday than Trout: Ty Cobb, Claudell Washington, and Sherry Magee. If he holds on to win the batting title, he’d become the third-youngest player, at 21 years and 57 days, ever to accomplish that feat, trailing only Al Kaline and Cobb. Only one other player racked up a .350-plus batting average, 15 or more homers, and 30 or more steals before August 1 of any given season: Rickey Henderson, in 1985. Only three other players this young have ever posted an OPS of 1.000 or higher in a season: Alex Rodriguez, Mel Ott, and Ted Williams.

If Trout plays every game the rest of this season and maintains his current pace, he’d hit .346 with 32 homers and 57 steals, something no one else has ever done (even if he cools off a bit, no player has managed .340 with 20 homers and 40 steals either). If he goes on to win AL MVP, he’ll become the youngest player ever to win that award, undercutting Vida Blue’s age during his 1971 campaign by more than a full year. Trout’s hitting hot zones are pretty much everywhere, even out of the strike zone. He plays great defense, too, ranking second among major league center fielders in Ultimate Zone Rating, tied for fifth in the MLB among all outfielders with 10 Defensive Runs Saved, and standing alone with the most jaw-dropping pair of catches by any player this year.

Try to evaluate Trout subjectively and things get even crazier. Just eight rookies have ever been rated best in the game for any category in Baseball America’s Best Tools survey of big league managers. Trout won three this year, Best Baserunner, Fastest Baserunner, and Most Exciting Player. Kaline, one of the few players to perform near Trout’s level at a similar age, compared Trout to another early-developing, five-tool star: “He’s a strong guy, runs really well, power — he reminds me a little bit of a Mantle.”

It’ll be years, maybe a couple decades, before we can properly compare Trout’s entire body of work to Mickey Mantle’s. But what we can do is see how Trout’s 2012 season compares to Mantle’s famous 1952 season, when no. 7 grabbed the torch from Joe DiMaggio, putting up huge numbers as a 20-year-old the year after his center-field predecessor retired. Here are the top-performing players in their age-20 season or younger (defined as being 20 or younger on June 30), as rated by Wins Above Replacement, according to Baseball-Reference.com. Note that pitchers are included, and that only seasons in 1900 or later are counted, to avoid some of the 19th-century pitching performance that included astronomical innings totals that bear no resemblance to today’s game. Sorry, Hoss.

Trout’s already sitting on the fourth-best season by any under-21 position player ever; again, he’s played just over three months, having earned his call-up on April 28. He’s got a chance to pass Rodriguez for the best under-21 season by a position player by the end of the month. A few big hits and he might overtake Kaline for the no. 2 spot by the end of the week. WAR is by no means a perfect measurement tool, and it gets more squirrelly the further back you go: The defensive components of old-time players’ WAR totals are based on more rudimentary stats than UZR, while baserunning contributions, which count for today’s players, aren’t considered at all for the Kalines and Cobbs of the bunch. Still, if Trout keeps this up, the gap between him and his predecessors won’t be close enough for advanced stats-quibbling to matter.

Baseball is rife with amazing stories this year, from the upstart Nationals, Reds, and Pirates to the proliferation of perfection, maybe even a Triple Crown run for Miguel Cabrera. Trout also plays on a very good team, alongside one of the greatest sluggers of all time in Albert Pujols and one of the game’s best current starters in Jered Weaver. Start to tally up Trout’s numbers, and the names he’s threatening to dominate — Mantle, Cobb, Kaline, Williams, Ott, A-Rod — and it’s possible that with everything else going on in the game, we might actually be underrating what’s happening here.

There’s still time for Trout’s incredible season to become properly appreciated. All he needs to do is finish with a flourish, the way Dwight Gooden did 27 years ago.

Gooden, the best under-21 player of all time by a wide margin, had an impossibly great season in 1985. The pitching-friendly ’60s and ’70s were over, giving way to a game that was well balanced between hitters and pitchers. Yet Gooden’s numbers in ’85 look like a vintage Sandy Koufax season or even Bob Gibson’s best, the kind of line you’d expect to find when pitching mounds seemed 40 feet high and most ballparks played like U.S. National Parks. Doc went 24-4 that year (best in the league), with a 1.53 ERA (best in the league). He led all qualified pitchers in innings pitched (276 2/3), complete games (16), strikeouts (268), and ERA+ (229).

Notice anything? Yes, Gooden’s 11.9 Wins Above Replacement don’t even get him into the all-time top 20. But the pitchers above him put up their numbers 99 or more years ago. Five-man rotations were decades away, and in many cases four-man rotations were still a far-off fantasy. Baseball wouldn’t be integrated until 1947. Proper scouting and farm systems were nonexistent. In that kind of environment, the gap between the best players and the worst was enormous, far larger than it is today. Seen in that light, you can classify Gooden’s 1985 season as the best of baseball’s modern era — which, for all intents and purposes, can also be argued as the best of all time.

Gooden had a few markers beyond his overall success that made his ’85 efforts resonate the way they did:

• He was unimaginably great down the stretch. In Gooden’s final six starts of 1985, he went 4-0 with an 0.34 ERA and zero home runs allowed in 53 1/3 innings. He gave up exactly zero earned runs in the entire month of September.

• He got a big label from a big-time writer. Peter Gammons was so wowed by Gooden’s greatness that he started calling him Baseball’s Mozart. Gammons was more right than he knew, nailing Gooden’s precociousness and singular talent, and also his tragically premature downfall.

• He played in New York.

Trout isn’t getting flipped to the Yankees or Mets anytime soon. Nor is he likely to match, say, Babe Ruth’s 1923 (13.7 WAR) with just 51 games to go. But he’s got a chance to write his own destiny. Put up even close to Gooden-esque numbers down the stretch and he’ll storm to league MVP honors, with a chance to lead the Angels to the World Series.

All we’d need beyond that is for someone to tag him with the perfect nickname. Then we could tell our grandkids about the 2012 season, the year the Mickey Mantle comparisons seemed so foolish. Because for a year at least, Mike Trout blew The Mick out of the water.

Thanks to ESPN Stats & Info for the research help.