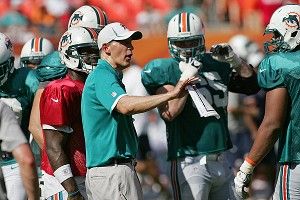 For all the concern about last summer’s NFL lockout, in the end, nothing was really lost. Training camps were cut short, the Hall of Fame game was canceled, but mostly, we were handed our football fix right on time and without incident. The lone casualty for fans who don’t want to hold out until September was the absence of Hard Knocks for the first time in five years. When it comes to reality TV, there is simply nothing better than the drama HBO puts together each training camp, and the first episode of this season had things right back where they were two summers ago.

During a press conference in late May, first-year Dolphins head coach Joe Philbin announced that his team would be featured on this year’s show. When the premiere episode begins, it’s no surprise to hear his voice as the introduction. Philbin explains that he spent “10,061 days” as an assistant coach. That “this is your profession. This is what you do.” The segue — footage of Miami’s locker room going through a reconstruction, the Dolphins’ literal overhaul — is heavy-handed but not without merit. The first player we see finding a spot in the finished locker room is undrafted rookie offensive lineman Derek Dennis, and all this means is we will not be seeing Derek for very long. He’s cut before camp — and the main title sequence — begins.

Dennis’s situation is a standard story line. The audience is introduced to an undrafted player looking to make a future, and we see how long his time will last. But what makes Miami a worthy focus of this year’s show are the larger questions the franchise has to answer, and it begins with its three quarterbacks.

Straight out of the main titles, we’re introduced to all three at home spending time with their wives. David Garrard and Matt Moore are playing dad, while the 24-year-old Ryan Tannehill roams the yard with a pair of dogs. The eighth overall pick is the future in Miami — something our narrator wastes no time in mentioning and the editing staff wastes no time in pointing out. When the rookie reaches camp after a short holdout, one of the first shots focuses on a photo straight ahead on the wall — Dan Marino, hands raised. After his first couple practices, Philbin notes with a bit of incredulity how sharp Tannehill looks, and the first bit of intrigue arrives.

Contrasting the tension of the quarterback battle is the ridiculousness of the man sure to become the show’s star. I wasn’t looking forward to a Chad Johnson–filled summer, but I’m willing to admit I was wrong. Chad’s first appearance comes when he makes his way into a coaches-only meeting, asks for a chair, tells his new head coach that he’s there because his wife doesn’t want to see him, realizes it’s a coaches-only meeting and then excuses himself.

Some other notable Chad musings:

On his lack of production with the Patriots last year: “I took a year off to give everybody else a chance to catch up.”

On his decade-long run of dominance before getting to New England: “I told you what the fuck I was gonna do and I just went out there and did it.”

On putting a video game session on hold to start a Twitter beef with the woman who would eventually become his wife: “If you pause Call of Duty for somebody, that’s the fucking one.”

The episode is filled out with a few arcs that figure to recur: former college basketball player, finance professional, and super athlete Les Brown’s struggle to make the team; former first-round pick Vontae Davis being out of shape and typically unenthused about playing football; Reggie Bush and Chad playing FIFA; Richie Incognito snapping at teammates. (Side note: Forgetting that Richie would be involved was the biggest oversight in my excitement.)

The story, though, will be the quarterbacks, and as the first episode ends, Philbin enters the QB meeting room. A bit of awkward conversation follows, and after Philbin asks what kind of coffee is brewing without having any intention of waiting for the answer, he lets the group know that league rules state he has to release a depth chart the following day. At that moment, Garrard is at the top, followed by Moore, and then Tannehill. “In no way is this competition over,” Philbin says before leaving his chair and walking out of the room. And I’m sure HBO couldn’t be happier about that.

Mike Trout's Rookie Campaign Is History in the Making