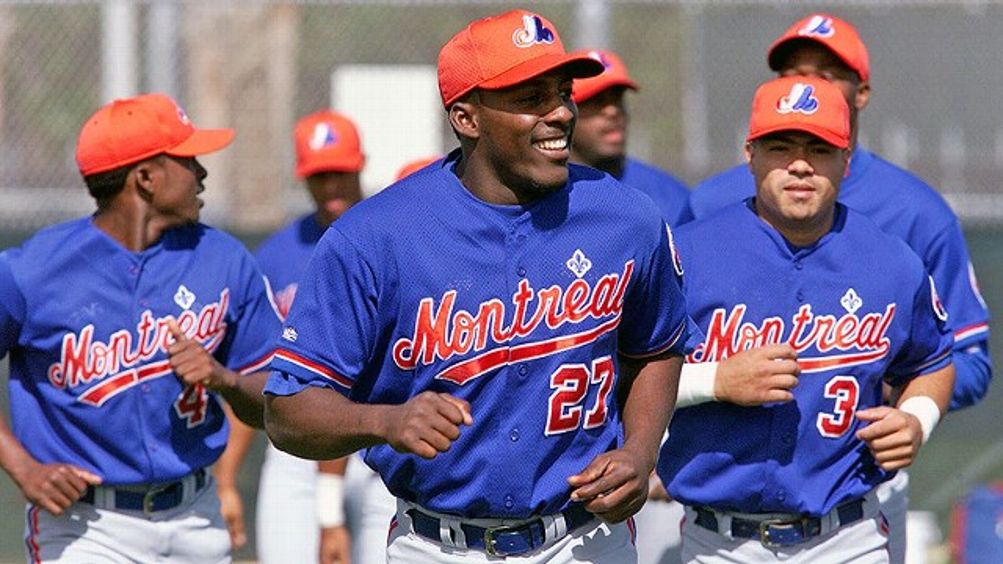 Vladimir Guerrero doesn’t invite the same reverence as Mays, the same all-time status as Griffey, or even the same Fallonization of “Nomah.” Still, there exists a group of baseball fans who watched Vlad from the beginning, who saw him burst into the majors as our generation’s Roberto Clemente, making plays no one else could make, doing things no one else could do.

The memory of Vlad’s heroics are still very much alive, as evident from some of the testimonials given by some of our readers:

I think it would be interesting to reflect on how Vlad pioneered (or at least made famous) the manner in which players scout opposing pitchers, i.e. hitting against them on his PlayStation game!
— Matthew Ferreira-Fernandez

From the first time the baseball world got a look at Vlad, it was clear we were dealing with a very different kind of subject. Read Dan Le Batard’s Guerrero profile from 10 years ago and you begin to understand why. There are the usual stories of future sports stars growing up in poverty … and then there’s Vlad, who drank from puddles as a child and had to share two beds with six other family members after a hurricane blew the roof off the Guerreros’ shack. There are the usual disconnects between English-speaking reporters and Spanish-speaking players … and then there’s Vlad, who’s so shy about his lack of education and a fear he’ll be perceived as unintelligent that he rarely talks to anyone outside his immediate circle.

By the time Vlad made his major league debut in 1996, Montreal had long ago built a reputation as an inviting city for ballplayers who didn’t fit the usual descriptions: Latin ballplayers blended easily with the city’s multicultural layout, even reclamation projects often got a second chance, with players like Oil Can Boyd, Pascual Perez, and Dennis Martinez finding success there after battling demons in other cities. Yet here was Vlad, withdrawing to his downtown apartment and making himself feel at ease the only way he knew how: By having his mother live with him, cook for him, care for him. When he came up for free agency the first time, he told his many suitors that it was a package deal: His mom’s coming with him, so he’ll need a place where they can both feel comfortable.

And yes, he approached the game differently from anyone else, including sizing up opposing pitchers by facing them on his PlayStation. One of the oldest axioms in sports is to practice the way you play. No problem for Vlad. He swung at everything on PlayStation, too.

Thing is, everything short of gators and Moose Jaw and sleeping bags actually happened. Tim Kurkjian wrote a whole feature about the home-run-on-the-pitch-that-bounced. I never saw Vlad hit a home run on a ball that bounced in front of the plate. But I did see him hit a ball off the wall in right-center on a pitch like that. And where most hitters learn plate discipline as their careers wear on, Vlad never lost his urge to swing at everything. “So I’m sitting there reading these letters and these people were riding him,” said Mickey Hatcher, who became Vlad’s hitting coach after he signed with the Angels. “And all of a sudden the next month he hit about .400. He’s hitting home runs [off pitches] that are bouncing in the dirt and all that kind of stuff and the same people write back saying, ‘Just leave him alone, just let him play.'”

As I’m a Nats fan, I have not inherited all the fine memories of Vladdy the Quebecois, but this moment I caught nationally is what will forever stick in my mind

For a franchise as star-crossed as the Expos, it’s shocking how many all-time arms they had in the outfield over the years. Andre Dawson was considered one of the best in the game, first in center, then later, when the Big O’s legendarily awful turf had destroyed his knees, in right. Larry Walker had a cannon. And Ellis Valentine, the prospect so talented that many people thought he’d surpass Dawson, Gary Carter, and everyone else, might’ve beaten them all.

Vlad was the next-generation outfield assassin. And man, did he love showing off that arm. Long-tossing balls 370 feet over distant outfield walls was just a small piece of the Guerrero legend. Problem was, he was so confident, so cocksure he could throw out anyone, anytime, that it sometimes cost him. May 30, 1998, Expos vs. Pirates at old Three Rivers Stadium. I’m on one of my classic baseball road trips with my Montreal buddies, high on Primanti and a chance to see Vlad break some other team’s heart. Unfortunately for the Expos, their closer Ugueth Urbina doesn’t have it that day. Four batters in, he’s loaded the bases with one out, putting the Expos’ two-run lead in jeopardy. Jason Kendall steps to the plate, then does that Jason Kendall thing, rapping an outside fastball to right with his inside-out swing. The ball bounces in front of Vlad, scoring the runner from third easily. We rise to our feet anticipating what’s going to happen next: Vlad’s going to charge in, field the ball, and fire a chest-high strike home, cutting down the potential tying run and saving the game for the Expos. Sure enough, Vlad charges … fields the ball cleanly … winds up … and airmails the catcher by, no joke, 10 feet. The bases clear, Pirates win.

Vlad had hubris, and he had balls. That’s what made him so much damn fun to watch, win or lose. Yes, Vlad had a stretch of eight seasons out of nine where he hit at least 32 homers, drove in at least 108 runs, and hit no worse than .307. But he also played in one of the most explosive periods for offense in baseball history, one that required not just consistent excellence but superhuman numbers to truly stand out.

As with any player who might be at the end, the debate has already started about Vladimir Guerrero’s Hall of Fame candidacy. Going by advanced metrics, it’s not as clear-cut as you’d think. As Neate Sager reminds us, an OPS+ of 140 isn’t all that special for an outfielder with Hall of Fame aspirations. In terms of overall, his 55.2 Wins Above Replacement (according to Baseball-Reference) puts him on par with Hall of Fame sluggers such as Hank Greenberg and Harmon Killebrew but also Hall of Very Good types like Bobby Bonds. With only one season above seven WAR, you could argue that Vlad didn’t have the otherworldly peak you might like from a surefire Hall of Famer either. Gun to my head I’d vote him in. But it’s close. And even if you do deem him worthy, the cap he should wear into the Hall is a tricky subject, with Vlad playing more games in Montreal (1,004) than in Anaheim (846).

Whatever becomes of his Hall of Fame case, let’s hope his unique brand of greatness is properly remembered. When the Jays signed Vlad to a minor league deal a month ago, a bunch of younger fans tweeted their disapproval, knocking Vlad for being washed up (possibly fair) but also framing his entire career as a plodding slugger with no speed and negative defensive value (very unfair). Vladimir Guerrero in his prime was one of the most exciting players any of you had ever seen, before or since. Remember him as vintage Clemente, not Mays playing out the string.