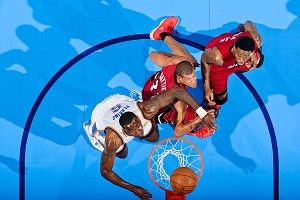 Much like their defense, the Miami Heat’s offense was a tale of two halves in Game 1. In the first half, and the first quarter especially, the Heat thrived, moving off of the basketball, cutting with precision, finding the open teammate, stretching the Thunder’s defense, and forcing them into tough rotations. They posted some shockingly efficient numbers: shooting 51.2 percent from the field and 60 percent from 3, an assist rate of 63.6 percent (which is well above the league’s regular-season average of 57.5, according to HoopData.com) on 22 shots off of 14 assists. This is how they built a seven-point lead at the half.


Like the Thunder, the Heat have enough talent such that they don’t need to rely on tricks on offense. A simple ball screen, especially when LeBron James is the screener, is enough to create opportunities, which is what we see in the first possession in the clip above. Mario Chalmers gets to the paint and then kicks the ball out to James, who knocks down the open 3-point shot.

On the next possession, James catches the ball at the elbow and works off of a ball screen, which forces the Thunder defense to switch. Kendrick Perkins defends James now. James takes advantage, driving and kicking to Shane Battier. Because Serge Ibaka had to help and close out, Battier can drive along the baseline to draw the foul.

Yet after two successful possessions, the Heat stopped moving like this and Dwyane Wade became the primary ball handler. As a result, the four other guys watched Wade as he tried to create something, but Wade is not the offensive spark he used to be. They scored just 40 points in the second half, shooting 40 percent while posting an assist rate of 42.8 percent. (If this were the percentage posted over the entire season, it would have been the lowest in the NBA this season). Here are a few examples of the stagnating offense:

All of the off-ball movement has vanished. When there was a ball screen, Wade’s hesitation turns it into an isolation because he can’t get past the defense. He has to settle for a contested jump shot. At one point, Wade had the ball in transition with Perkins stepping up to defend him. Wade settled for a 3-point shot on that possession.

While Wade played poorly, the coaching staff deserves some blame here as well. They need to compensate for Wade’s diminished play and help him out. If they are determined to have him, instead of James, initiate the offense (to save James’s legs; you can’t ask James to defend Durant, run the point, create for his teammates, and look to score himself playing the kind of minutes he does), you have to make it easier for Wade. They need that movement back.

The two possessions above are perfect examples of how the Heat can be successful. Wade brings the basketball up, but the action is taking place off of the ball. James is playing off of a staggered screen. He makes the catch at the top of the key, in a position to attack, while also giving Wade some options. When this play was run a second time, the defense was focused on James, so Wade is able to attack himself. He drew a foul on a jump shot.

Anytime a Heat set featured off-ball movement, they got good looks from it.

In the first possession, James plays off a cross screen, forcing the defense to collapse in to keep the ball out of his hands, which frees Chris Bosh for an open jump shot. It doesn’t have to be as complicated as that, though. Using James as a screener for Wade, instead of having him watch, will allow Wade to get to the front of the rim.

We’ll still see the Heat use James as the primary ball handler, but that can’t be their only option — especially in the second half. If the Heat want to repeat the success they had in the first half of Game 1, they need to provide Wade with options by using that off-ball movement.