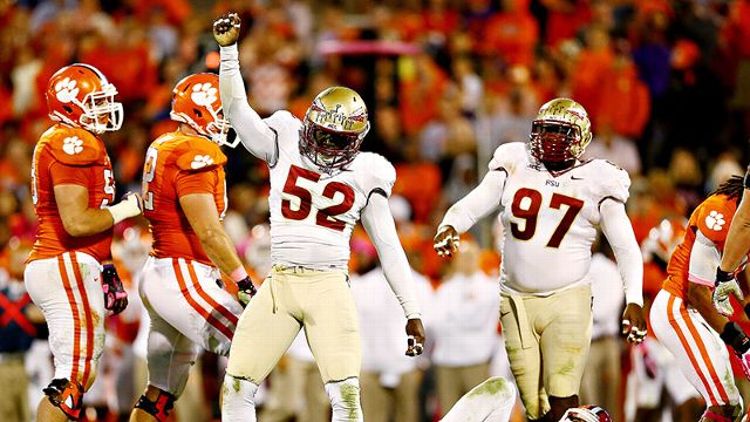 Las Vegas commentators often stress how much the public loves to bet favorites. It’s not so much that the public prefers to lay points, but rather that it loves to back the better team — and if the better team is getting points, that’s just icing on the cake. College football polls act as shortcuts, helping the casual fan decide which team is better. BetOnline.ag’s Dave Mason estimates that a higher-ranked underdog receives the public’s betting support upward of 90 percent of the time.

On Saturday, third-ranked Clemson was a 4.5-point home underdog against fifth-ranked Florida State, and once again the public bet the higher-ranked team. The wiseguys, on the other hand, bet the Seminoles heavier than any other college football team this week. The professionals prefer getting points, but they are willing to lay them when the public’s lopsided support of a higher-ranked underdog creates value. Florida State’s impressive win and cover has many discussing its championship chances. The Golden Nugget is taking $3,000 bets on the 10 most likely BCS title matchups. The Seminoles are currently 6.5-point underdogs against Alabama, 6-point dogs against Oregon, and favored against all others.

The public won significant decisions on favorites like Notre Dame and Baylor (now on an 11-1 ATS run), but once again it was a losing college football weekend overall for the bettors. SEC underdogs were surprisingly successful; in five competitive matchups (in which the favorite was favored by less than two touchdowns), the underdog pulled the outright upset in all five. A $100 money-line parlay on Missouri, Vanderbilt, Tennessee, Mississippi, and Auburn paid more than $63,000.

Bettors started off another losing NFL Sunday backing New England with the biggest action of any day game. After that loss, the public was “chasing all day,” in the words of Bovada.lv’s Kevin Bradley. A sports bettor, reasonable in most aspects of life, can take an early beat and be put “on tilt” the rest of the day. Professionals discipline themselves to think of their results as one long gambling session over the course of months and years. The average bettor, on the other hand, hates the idea of having to “pay the man” after a losing weekend, sometimes resorting to big “bailout” bets when down late in the week. As you can imagine, this is a recipe for disaster.

The public also lost big on Denver, which has now covered only one of its last five games. You have to wonder if the bettor’s love affair with Peyton Manning will continue. Indianapolis has now defeated Seattle, San Francisco, and Denver this season. These happen to be the top three teams in the Vegas Rankings put out by NFL expert Steve Fezzik.

The public won a classic sharps vs. squares battle in the San Francisco vs. Tennessee matchup. The 49ers received the most lopsided support of the day (76 percent of tickets, according to the betting tracking tool at Pregame.com), yet heavy wiseguy action on the Titans dropped the spread from 6 to 3.5. The wiseguys (as reported by LVH bookmaker Jay Kornegay) won with the Jets and Bills, and lost with the Browns. Even after this second straight profitable week, the sharps are only 6-12-1 ATS in their last 19 biggest bets. The public ended the week winning with the Giants on Monday Night Football. Have you ever wondered about the difference in betting handles between an appealing prime-time game and a stinker? Mike Perry from Sportsbook.ag reported a modest 15 percent drop-off compared with last week’s MNF game, which featured Andrew Luck and the Colts.

Looking ahead to next week, four BCS title contenders (Alabama, Oregon, Florida State, and Baylor) are favored by an eye-popping 117 combined points. With an average spread of nearly 30 points, it’s clear bookmakers believe these teams sincerely care about style points.

RJ Bell (@RjinVegas) is the founder of Pregame.com. His ESPN radio show in Las Vegas can be heard weekdays at 10 a.m. PT.