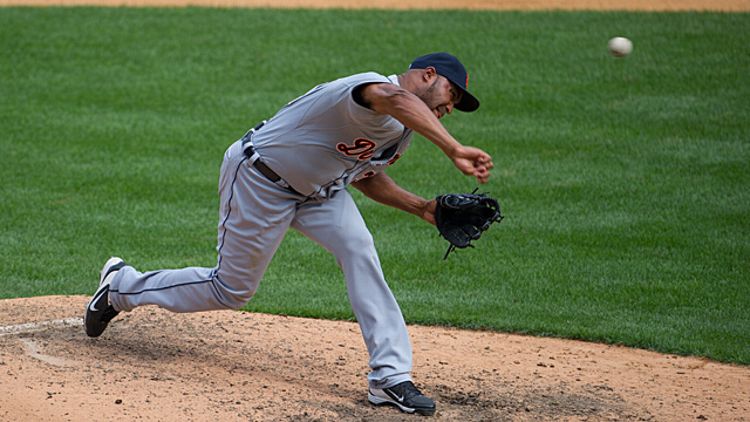 As the 0-2 curveball left the fingertips of Jose Veras’s right hand, the Tigers were leading Game 6 of the American League Championship Series 2-1. It was late in the game, and if Shane Victorino struck out, the mood at Fenway Park would have migrated from cautiously optimistic to squanderphobia. Veras and his curveball had mystified Victorino, already besting him twice earlier in the series. Veras loves to throw his curveball; in fact, the Red Sox were well aware that he throws that pitch about 80 percent of the time on 0-2 counts. So with Victorino now in that exact predicament, there was little doubt what pitch was coming.

Unfortunately for Veras, unless something crazy happens during the World Series, there’s a good chance his ill-fated 0-2 offering will go down as the most noteworthy pitch of the season. That season-changing curveball was just one of more than 700,000 pitches during the 2013 Major League Baseball season. Some of them were good, some of them were bad, but taken all together they reveal the general nature of pitching strategies in the league. This graphic shows the common locations of pitches thrown during the regular season. 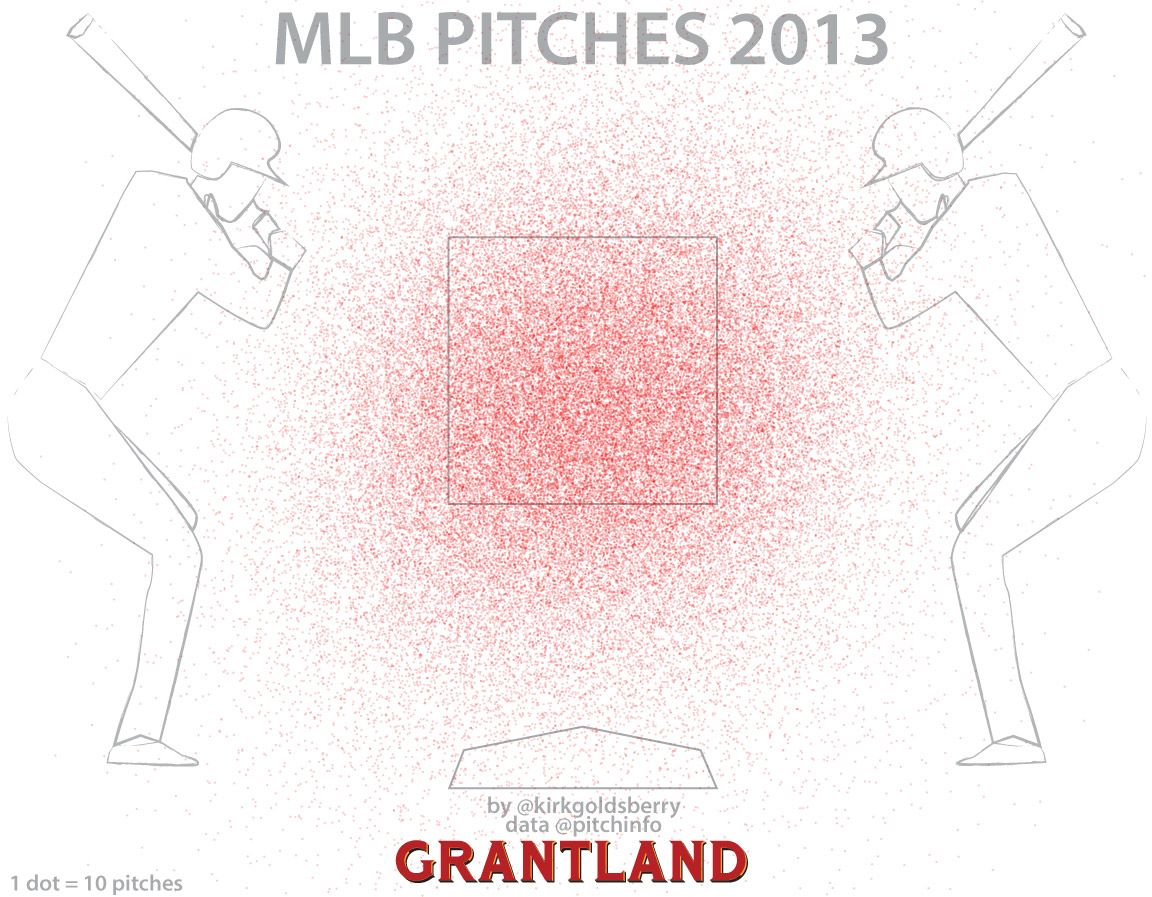 With the help of the great Dan Brooks and Harry Pavlidis, I looked at some basic pitching patterns from this season. Although looking at the entirety of the league’s pitches doesn’t really show anything interesting, breaking these pitches down according to pitch type, batter stance, and pitching hand is much more enlightening. The most common pitch in baseball is the four-seam fastball, which, according to Pavlidis’s marvelous Pitch Info database, accounts for 35.3 percent of all pitches. On average, four-seamers travel at a velocity of 92.9 miles per hour, but their predominant location depends upon whether the batter and pitcher are right- or left-handed. As you can see, pitchers target righties very differently than they target lefties — preferring to locate their fastballs toward the outside edges in each case. 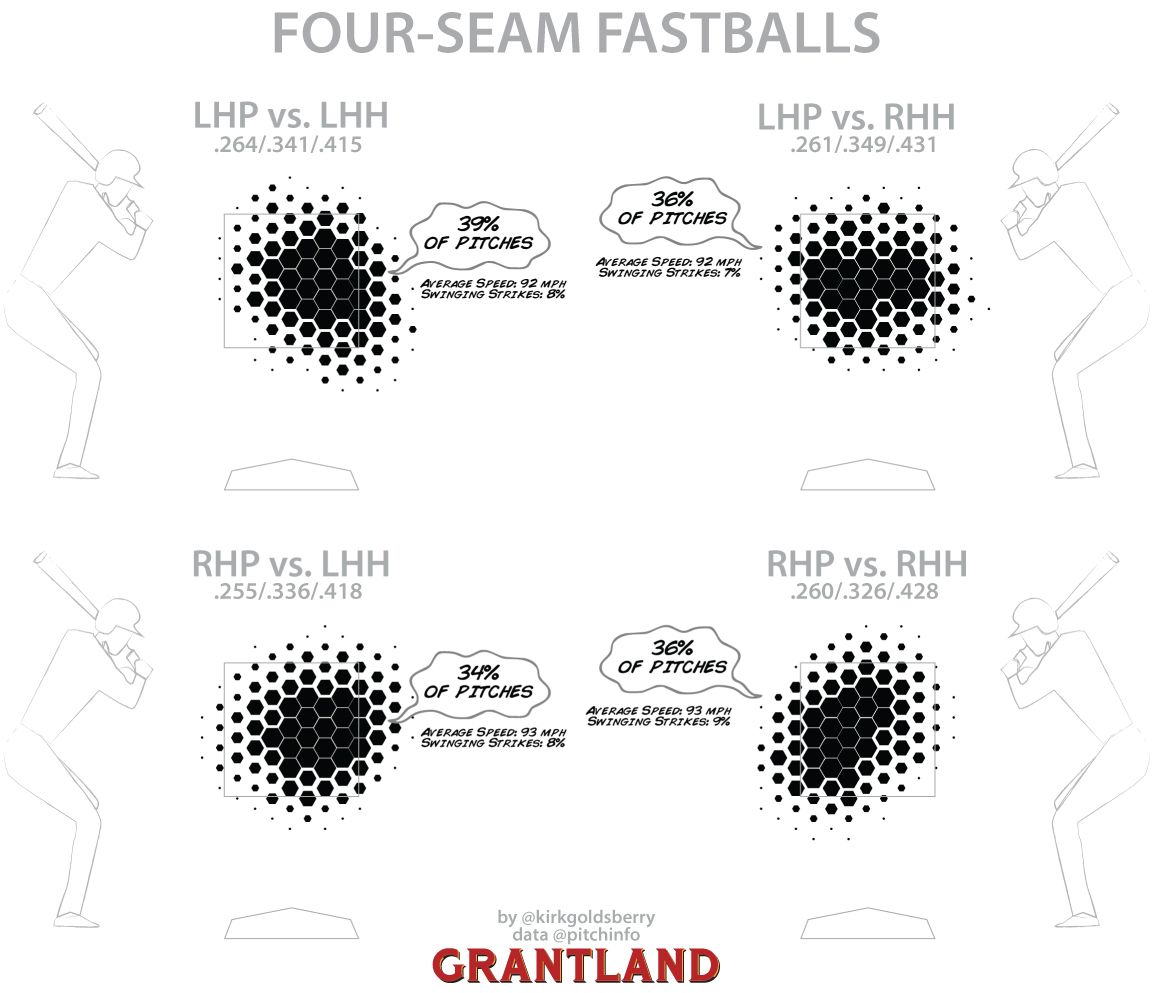 The second-most common pitch in MLB in 2013 was the two-seam fastball, also known as the sinker, which accounted for 21.8 percent of all pitches, at an average speed of 91.7 mph. These pitches live up to their name and end up lower in the strike zone than their four-seam cousins. 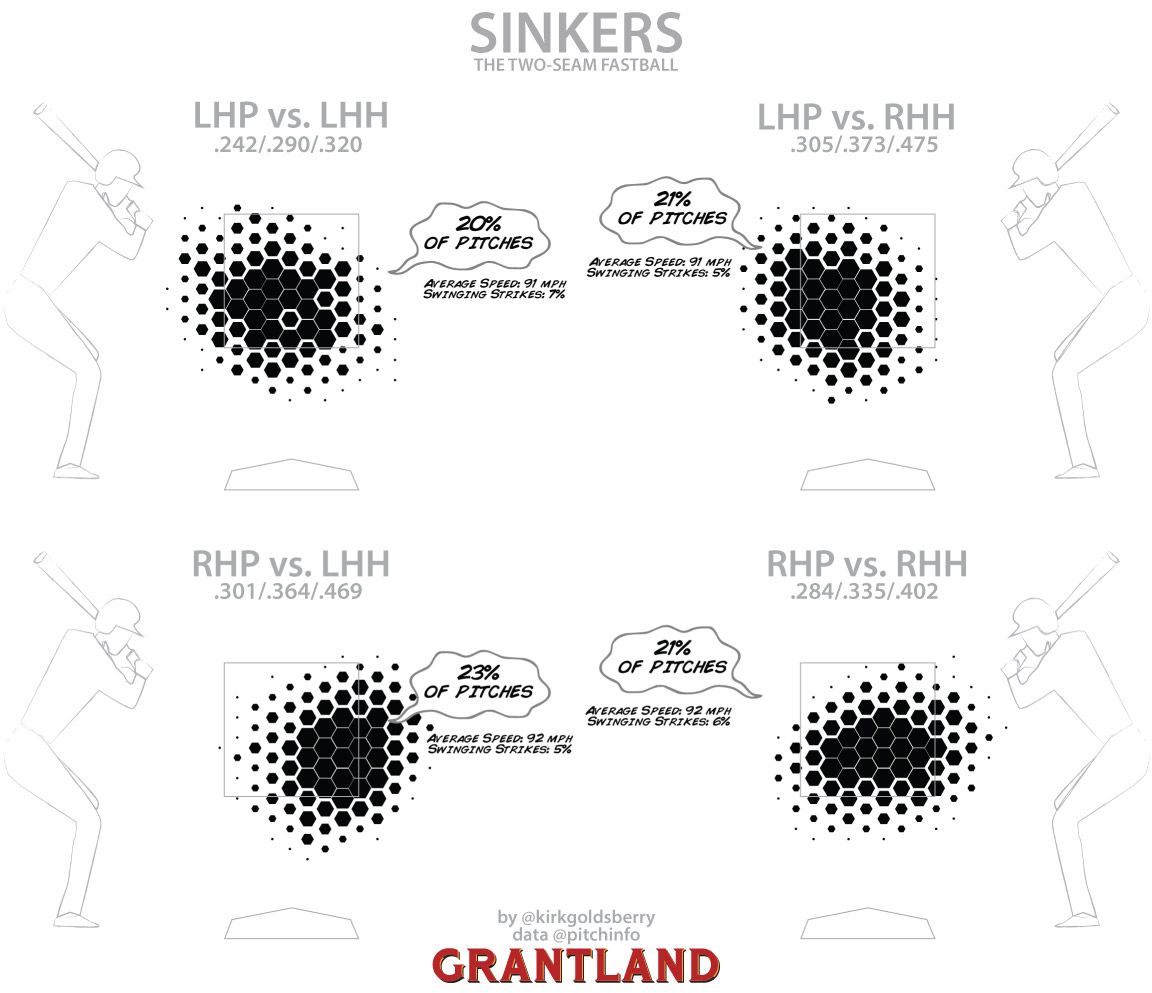 The third-most prominent pitch in MLB — and the most common breaking ball — is the slider, which makes up 14.1 percent of all pitches thrown and travels at an average speed of 83.9 mph. Pitchers are much more likely to use this against a batter who shares their dominant hand. In other words, lefties are twice as likely to use their slider against lefties than they are against righties. The same holds true for right-handed pitchers. A southpaw’s slider breaks low and away to a left-handed hitter, but breaks toward a right-handed batter, right into his swing. This bias is also supported by the numbers — the graphic below reveals that the slider is generally much more effective against a “same-handed” batter. 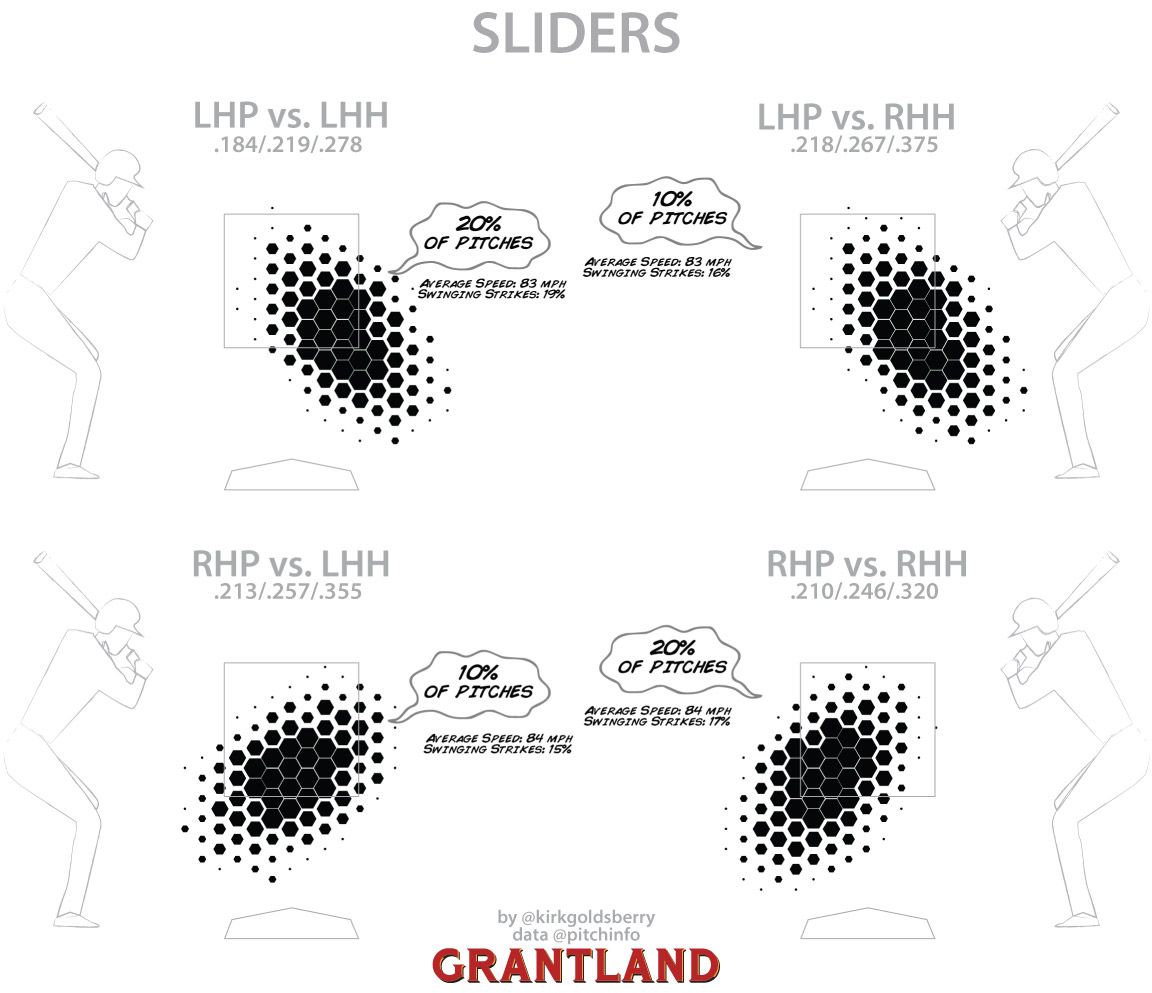 Curveballs account for only 9.9 percent of MLB pitches. Although they produce an overall location signature similar to the slider, they do not yield differences nearly as drastic in terms of frequency or efficiency. The curveball is also, by far, the slowest MLB pitch, clocking in at an average speed of about 78 mph. 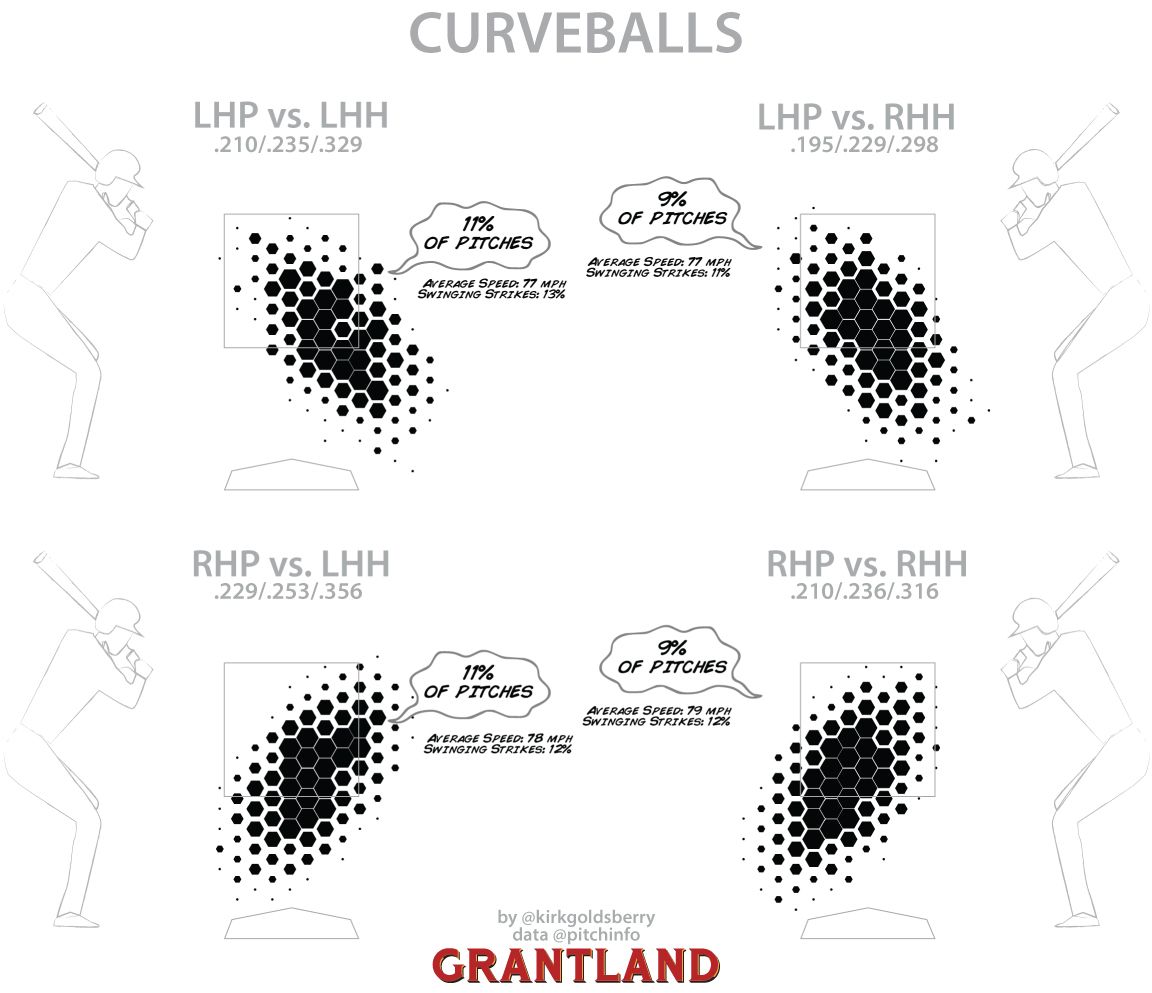 Lastly, the changeup makes up 9.5 percent of pitches and travels at 83.6 mph, exhibiting the opposite usage pattern as the slider: Lefties hardly ever throw it against lefties, but they use it a lot on righties. The same holds true for righties, who use it much more against left-handed batters. In each case, an opposite-handed batter is about four times more likely to see a changeup than a same-handed batter. Unlike the slider, the changeup doesn’t break into an opposite-handed batter’s swing, which helps explain why it’s generally a much more popular off-speed option in those situations. 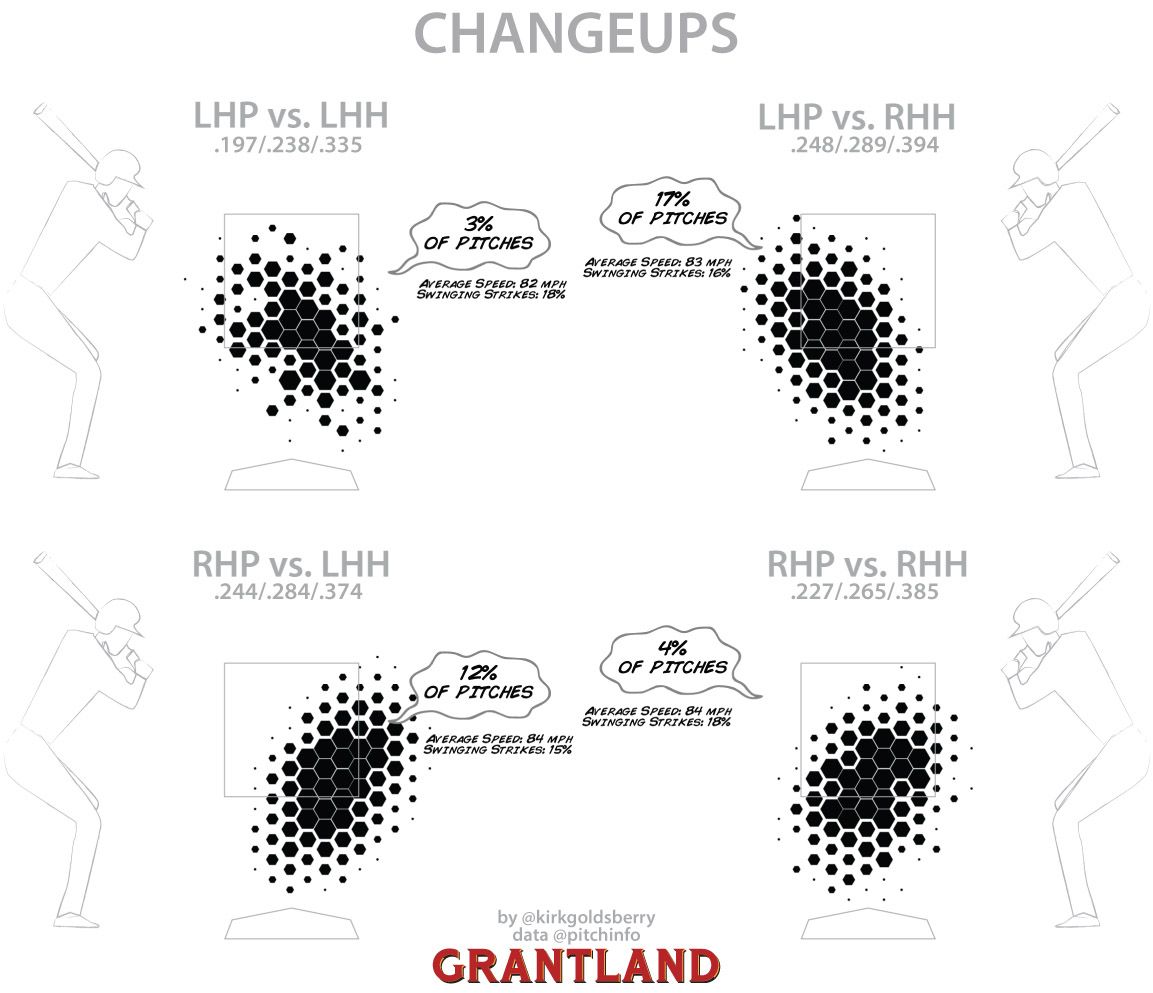 Although none of this information may surprise the most seasoned baseball observers, it’s still useful to see the collective nature of major league pitching via graphics. There are leaguewide similarities in pitching strategies that can serve as beneficial guides or bases of comparisons with individual pitchers. With the World Series beginning tonight, pitching will once again likely determine the outcome. And even though there are more than 700,000 pitches thrown each year, it only takes one to sway an entire series.