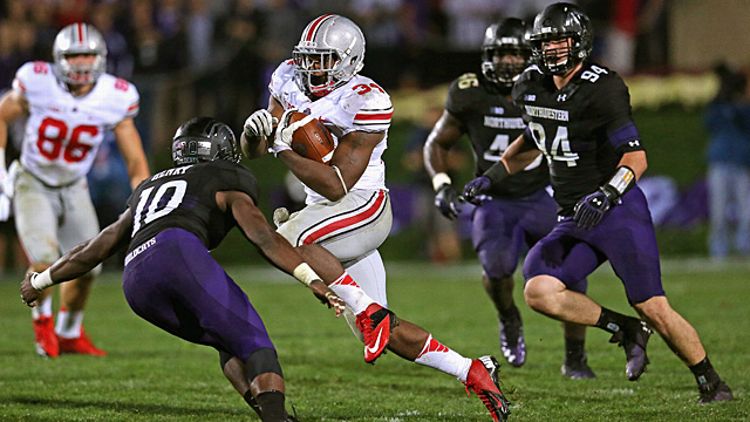 Bettors watching games at Vegas sportsbooks tend to go wild in response to the smallest successes (such as getting a first down in the second quarter). Some combination of the booze, cash, lack of sleep, and location strips away society’s niceties. The intensity skyrockets when a single play decides the bet’s outcome. In the time it takes for your heart to race through a few dopamine-filled pumps, you are either a winner or you’re a loser.

On rare occasions, that deciding last play is so improbable, you never forget the result.

Saturday night, Ohio State (favored by seven points over Northwestern) scored a defensive touchdown on the last play of the game to win by 10 points. Approximately 80 percent of the money bet on the game backed Ohio State — meaning the team’s last-second score had the majority screaming in victory.

This miracle cover happened to be the biggest-bet college game of the day overall; and, for many sportsbooks, this single result was the difference between a winning and losing day. Keep in mind that overall exact numbers are never available. That said, our best educated guess is that the Buckeye touchdown and cover resulted in a $100 million worldwide swing from bookies to bettors. Kevin Bradley from Bovada.lv said simply: “It made me sick.”

Denver’s against-the-spread loss against Dallas highlighted an extremely profitable NFL week for sportsbooks. The Broncos opened as a four-point road favorite and were quickly bet above a touchdown. More than one bookmaker told me that the Cowboys cover was their biggest win on any single game this season.

The wise guys, entering the week on a 1-9-1 NFL run, finally had a winning Sunday with the Texans, Eagles, and Cowboys (as reported by LVH’s Jay Kornegay). New Orleans has returned as a public darling (currently the second Super Bowl favorite at 5/1), and its cover over Chicago was a rare bright spot for bettors.

The move to a late start for San Diego at Oakland increased action on the game “tenfold,” according to Sportsbook.ag’s Mike Perry. And with 73 percent of the tickets backing the Chargers (via our bet tracking tool at Pregame.com), Oakland’s win was another big loser for bettors. It was the same with the Falcons on Monday night; the public fell into the perceived “must-win” trap, and the Jets became the first double-digit underdog to win outright on Monday Night Football since September of 2000 (after 26 straight big underdog defeats).

Next Sunday, history will likely be made with the biggest NFL point spread in the modern era. Denver is currently favored by 27 points hosting Jacksonville. This is the biggest NFL spread going all the way back to 1972. The 1976 Steelers, favored by 26 points over the expansion Bucs, were the prior record holders. Dave Mason from BetOnline.ag tells me that 70 percent of the early action has backed the Broncos. Even so, the spread has been pushed downward from 28 with bigger bets on the dog from the professionals.

I’ll be back next week to tell you the truth about what happened over the weekend in Las Vegas.