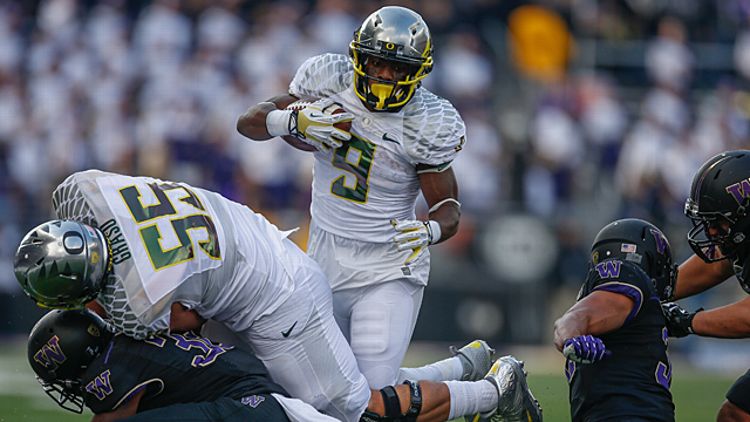 Bettors suffered their worst loss of the football season this past weekend. When talking to bookmakers in the aftermath, I didn’t really sense joy, but rather lingering irritation that it took so long to book their first monster win. Bettors throwing darts and laying 11-10 will lose 4.76 percent of money bet in the long run. To a civilian, that probably seems like a nice healthy profit. But to the bookmaker, that is only the starting point — and they are always impatient to get more.

College football was particularly brutal for bettors. A majority of sportsbooks reported Texas A&M vs. Ole Miss to be their biggest-bet game of the day, and more than one said the Rebels’ cover was their biggest win of the day. In the Red River Rivalry, approximately four out of five dollars bet backed favored Oklahoma, resulting in another big loser for the bettors. Utah’s outright upset of Stanford gave the bookies a 3-0 sweep on Saturday’s biggest decisions.

Once again Oregon was a bettor’s best friend and a rare CFB bright spot. No team in memory has frustrated bookmakers like this Ducks squad. The Las Vegas response to a juggernaut is to keep increasing the premium charged to back that team. All a bookie can really do is keep increasing the spread. Oregon has been favored by over 33 points per game on average in 2013, and still is undefeated ATS. Extending back to last season, the Ducks have covered 13 of 14 and have been favored in each one of those games by more than a touchdown.

Bettors also struggled in the NFL. New Orleans at New England generated huge action. BetOnline.ag’s Dave Mason told me more was bet on this game than even Sunday Night Football. Rarely will a day game account for more betting handle than a prime-time matchup, but bettors love marquee quarterbacks, especially when the game is expected to be high-scoring. Tom Brady’s last-second touchdown pass resulted in the biggest win of the day for sportsbooks. The Packers were also bet big over the Ravens, and once again the underdog’s backdoor cover favored Vegas.

The Rams’ dismantling of the Texans was not only a big straight bet loser for bettors (with 74 percent of tickets on Houston via our bet tracking tool at Pregame.com), but as TheGreek.com’s Scott Kaminsky points out, it was also a huge loser for those who teased the favorite down below a field goal. Monday-night football was the final nail in the bettor’s Week 6 coffin, with upwards of 90 percent of the money backing the Colts at some shops, plus an even higher percentage backing the “Over.” Philadelphia was a scarce winner for the public, as was Dallas covering as a Sunday Night Football favorite.

The biggest wise-guy sides in the NFL split, with the Bills covering and the Raiders not (making the sharps 4-11-1 ATS their last 16). For the first time this season, the LVH’s Jay Kornegay reported a college game as one of the biggest wise-guy bets. Oregon State opened as a 3-point underdog and closed as a 2.5 point favorite, and was backed heavily by both wise guys and the public. Often the pros and recreational bettors are on opposite sides (since the market adjustment to the recreational bettor’s action tends to create value), but it’s important to know that they sometimes back the same side.

The Broncos closed as a 26.5-point favorite over Jacksonville, making Denver the biggest favorite in recorded point-spread history (dating back to 1972). The action of the game was split, with overall handle below average. In fact, Kevin Bradley from Bovada told me he wrote more tickets on Arizona vs. San Francisco than on this historic game. I guess we finally found a favorite so big the public was unwilling to lay it — though no number would be big enough to entice the public to back a team as bad as Jacksonville.

Looking ahead to next weekend, Sportsbook.ag’s Mike Perry expects strong support for the undefeated UCLA Bruins +4.5 against Stanford, and the public will likely go wild for the suddenly back-in-favor Patriots, laying “only” 4 points to a Jets team who disappointed many against Pittsburgh.

I’ll be back next week to tell you the truth about what happened over the weekend in Las Vegas.

The Masked Man and Peter Rosenberg Podcast: The Rise of the Rhodes Family and the Hulk Hogan Rumors