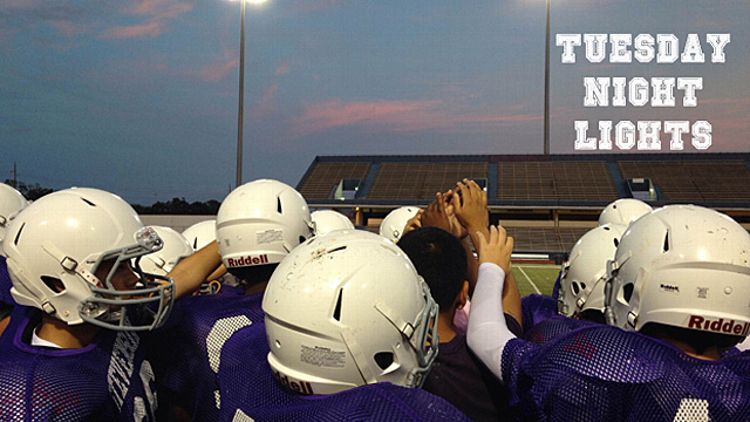 I think you need at least five great players on a team to win a middle school football championship. You need to have two devilish boys to play outside linebacker (because everyone runs wide, particularly the best, fastest teams). You need to have at least one devastating lineman to cause some sort of mayhem in the thickets. You need one eagle-eyed safety with sticky hands and an iron nose. And you need a Do Everything, a kid with a brain that’s strong enough to understand the best course of action for each play and a heart that will carry him where his body sometimes won’t.

The year we won our first championship we had six great players. The year we won our second we had five. (The year we got demolished we had one.) This year, we have five, even though we really only have four: the Big Gun, the T, the Would-Be Star, and the Helicopter, who officially now counts for two.

If one of them has a good game, we’re capable of beating any of the lower-rung teams in our zone. If two of them have good games, we can beat the average schools. If three play well, we can stand even with just about anybody except the very best. And if four do, if they play to their utmost capabilities, we can win beat anybody in our division. And probably the Cleveland Browns if we get the ball first.

Last night, for their homecoming game, their most well attended game of the year, all four were possessed.

It was an annihilation.

We played School H, a mystery opponent we’d never played before and have never really even seen. It was clear after the first series that they had two very good players. Those players were agile and aggressive, but were mostly alone. The Would-Be Star, one of our team captains, identified it immediately. He lathered up his war dogs and sent them in. Halfway through the second quarter, after having been tossed to the ground in the backfield for maybe the seventh time, their little running back scooped himself up, pounded his fist into his hand, charged back to the huddle, then angry-screamed at his line, “You ain’t doing shit!” He was up to their knees but he towered over them. Our coaches all admired his heart. And our team tried to eat it.

An hour and a half after the game started, our players were dirty and sweaty and proud. And still undefeated.

The Coach: So nicknamed so because he understands every player’s job on every play. He lost his starting linebacker spot two games ago to a kid slightly more menacing. The Coach went in early in the first quarter last night and snatched it back. His best play: School H’s large skill player burst through the line, into the Coach’s area. He steadied himself, stood STRAIGHT UP (I smiled), closed his eyes, grabbed the first person who touched him, then fell to the ground. When he realized he’d actually snagged the ball carrier, he popped up, pounded his chest, pointed at someone in the stands, then glowed like Bruce LeRoy at the end of The Last Dragon. It was magic.

He broke one play for an 80-yard run, broke a separate one for 45-yard touchdown run, threw a ball 25 yards downfield into the hands of his receiver WHILE BEING DRAGGED DOWN TO THE TURF BY A 600-POUND LINEMAN, racked up 700 tackles, and literally knocked a kick returner off the ground and several feet out of bounds.

At one point in the game, the Helicopter found himself skirting up our sideline, eight yards past the line of scrimmage. Two linebackers and both safeties sped toward him to force him out of bounds. They arrived in perfect unison at a perfect angle. It was a great read on their part. And any reasonable human would’ve simply stepped out of bounds and avoided catastrophe. But the Helicopter is not a reasonable human. He took stock, remembered his spine is made of titanium, lowered his shoulder, and then BAM! BAM! BAM! BAM! It looked like the scenes in the movies when the car drives through the fruit stands in the middle of a city chase scene. Arms and legs and torsos flew in all of the different directions. Me and the other coaches, all our players, and basically everyone in the stands just stood there. Nobody knew what to say or do. He made it six or seven steps past them before his momentum carried him out of bounds. The crowd went yo-yo. He stopped, turned around like how monsters turn around when they hear a small sound in the background, blew fire from his nose, then handed the ball to the referee and jogged back to the huddle. Finally, after several seconds, one of our linebackers behind me offered to no one in particular, “I’m glad he’s on our team.”

The Would-Be Star: We called a play for him to run a quick slant at the 2-yard line. He lined up, glanced at the defense, sprinted back to the Helicopter, said something, then ran back to his spot. Five seconds later he was standing in the end zone with the ball and we were ahead by six more points. Afterward, he said, “I saw the safety was leaned in. They were gonna bracket me. They knew I was gonna run the slant. I told [the Helicopter] I was gonna fake in one step and then cut back to the pylon. As soon as I cut I heard [the corner] shout, ‘Aw man!’ I saw it, coach.”

The T: He had a 70-yard return for a touchdown on a kick return to open the second half and came within inches of breaking it a second time in the fourth quarter for another one — and those two plays were only maybe the fourth and fifth best of his night. Because on defense — OH MY GOD ON DEFENSE — he is unstoppable.

The T has zero hesitation in him. ZERO. He is bloodthirsty for collision. He’s one of, like, six eighth-graders in the galaxy who get genuinely excited about blocking for other runners. He pursues the ball the way cheetahs chase down gazelles. It’s remarkable. And his instincts are impeccable. I don’t know how many tackles he ended up having for the game, but were I to guess I’d go with “all of them.”

The Pacific: Our out-of-nowhere offensive lineman. He has proven himself entirely reliable at guard. He smiles constantly and rarely speaks. The only thing he’s ever asked me on the field is, “Coach, am I allowed to throw him?,” referring to the defensive lineman lined up across from him. He’s a big, strong, sweet kid. If we had two more of him, the Helicopter could likely sit back in pass protection for a week.

The Big Gun: Total destruction. Trying to tackle him is like trying to tackle a Hyundai. He is a great white shark. If we play a players vs. teachers game, I’m going to be absent that day. I very much care about not having my legs gnawed off.

“I’m chasing the ball, coach. I’m like a hungry person chasing food.” —Coach, when asked what he was doing on defense

Next week we play School M, always a tough out. They beat us last year (basically everyone did, in case you haven’t picked up on that), played us to within a yard of our undefeated season the year prior, and played us to a perfect 7-7 standstill the year before that. They will be the last real test of the season for us. Escape them and we will very likely high-step the last two games to a remarkable 7-0 record, basically the epitome of sport.