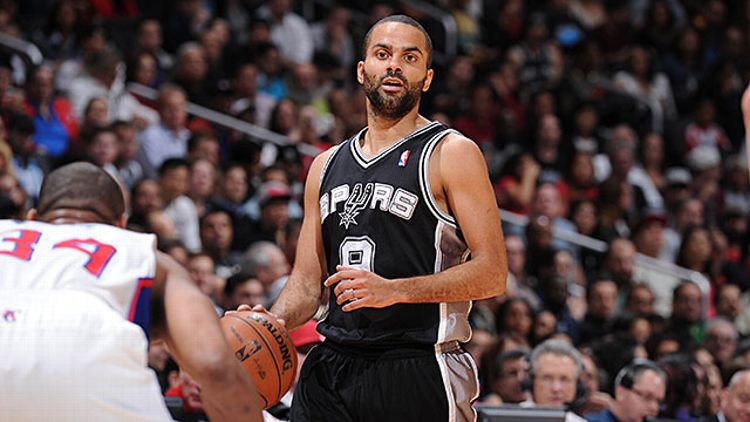 Considering the recent rash of a more fun-loving strand of NBA shitshow, I can’t really blame you if you’ve already forgotten all about Tony Parker’s recent foray into, and out of, accidental anti-Semitism. But if you’re still trying to parse how, exactly, Parker got tangled up with English Premier League sociopolitical fault lines, a controversial hand gesture that borrows its name from a regional French fish dumpling delicacy, and a hate-spewing stand-up, let’s talk. In other words: What the hell is a Dieudonné?

The trouble started on December 28 when West Brom striker Nicolas Anelka celebrated the first of his two goals against West Ham United with a quenelle. The gesture — made by extending one arm down while touching the shoulder of that arm with the other hand — was coined by the French comedian Dieudonné (and, despite sharing a name with the aforementioned fish delicacy, has, tragically, nothing to do with dumplings of any kind). Dieudonné claims it’s an “anti-system” gesture, meant to indicate a kind of free-thinking authority-opposing spirit. But critics say it’s nothing more than a thinly veiled Nazi salute.

And where Parker comes in is that, after Anelka’s little situation flared up, a three-year-old photo surfaced of — oh, jeez — Parker himself, alongside his countrymate Dieudonné, doing the quenelle.

This dude Dieudonné has had one of the strangest career arcs imaginable. He broke through in the early ’90s with a comedy partner, Elie Semoun, who is Jewish. Together, the two were a bastion of liberal sensibilities. “Onstage, I used to forget that I was the Jew and he the black guy,” Semoun has said. “We were profoundly anti-racist. We were the symbol of anti-racism.” In 1997, the two split, and Dieudonné went on to enjoy solo mainstream success, most notably with his appearance in the 2002 French hit Asterix and Obelix Meet Cleopatra. Since, however, Dieudonne has drifted to the far, far right.

In the summer of 2012, as Dieudonné was promoting his movie The Anti-Semite, his behavior became increasingly outlandish. According to the New York Times:

Dieudonné once appeared on the air dressed as an Orthodox rabbi in a military uniform and sarcastically called on suburban youths to join the “American-Zionist axis” … He has befriended extremist leaders like Alain Soral and Jean-Marie Le Pen, the founder of the National Front party … On one occasion he invited Robert Faurisson, a historian and advocate of Holocaust denial, onstage and asked the audience to applaud. An assistant dressed as a concentration camp prisoner then presented Mr. Faurisson with a fake prize (“the man no one wants to be associated with”).

Meanwhile, the quenelle, created by Dieudonné in 2005, has become shorthand for his extremist politics. As the Times reported, Dieudonné fans “send him photos of themselves performing the gesture in front of historic monuments, next to unwitting public officials, at weddings, under water and in high school class photographs, but also, increasingly, beside synagogues, Holocaust memorials and street signs displaying the word ‘Jew.’ At least one young man appears to have posed for a quenelle outside the grade school in Toulouse where, in 2012, four Jews were killed by a self-proclaimed operative of Al Qaeda.” Still, Dieudonné obfuscates, denying the “quenelle” is an anti-Semitic gesture, framing it instead as some kind of call of the resistance.

Parker, to his credit, quickly and effectively released a statement about his quenelle photo, saying, “When l was photographed making that gesture three years ago, I thought it was part of a comedy act and did not know that it could be in any way offensive or harmful. Since I have been made aware of the seriousness of this gesture, I will certainly never repeat the gesture and sincerely apologize for any misunderstanding or harm relating to my actions. Hopefully this incident will serve to educate others that we need to be more aware that things that may seem innocuous can actually have a history of hate and hurt.” (Incidentally, a photo of Boris Diaw, fellow Frenchman, doing the quenelle with Dieudonné also surfaced, but has gotten less attention than Parker’s photo, presumably because he is Boris Diaw. One of the many benefits of being Boris Diaw!)

Part of what makes this all so strange is that it happened to Parker and the staid, reliable old Spurs. We’re used to seeing them seamlessly execute selfless basketball and pal around in salsa commercials, for goodness sakes, not fight their way out of international hate-speak scandals. (The whole “sexts to Erin Barry” situation is quite an exception to the rule, to be sure, but that the phrase quickly dissipated from our lives was generally a testament to the quality of San Antonio brand unflappability.) What’s even more unsettling about it, though, is watching the NBA get yanked across the Atlantic and plopped right down into some historically weighted, European ethno-cultural strife.

EPL fans have experience attempting to parse this kind of stuff. Just this fall, Tottenham Hotspur supporters were ordered by the Football Association to stop using the word “yid” — generally understood as a slur for “a person of Jewish descent,” although not so when used within the Jewish community — in their chants and slogans. Where it gets complicated is that Tottenham fans do use “yid” positively: Despite not being anywhere near majority Jewish, the fan base self-identifies as the “Yid Army.”

The reasons why are obscure. According to Heeb, “In the early 20th century, much of London’s Jewish population lived in the East End, and Tottenham’s stadium White Hart Lane was easily accessible from that area via tram or bus. Therefore, it became a Sabbath tradition to take the tram or the bus up the A10 to Tottenham matches, cementing the club as ‘God’s chosen team.’ Today, the club’s supporters continue to cling onto their status as the Yid Army, and use the term with pride, despite the fact that most of them aren’t even Jewish. … it’s been estimated that only five to 10 percent of Tottenham’s supporters are actually Jews. In fact, the team’s arch-rival Arsenal is said to have a larger percentage of Jewish fans.”

The FA wants to curtail the “yid” chants because opposing fans take the bait in the obvious, ugly manner: Shouts of “Sieg Heil” and “Spurs are on their way to Auschwitz” have been known to pop up. But from a neutral point of view, this is all bizarre — a majority non-Jewish fan base aligning themselves with Jews, against virulent anti-Semitism, by reappropriating a word with both pejorative and community-building connotations, in the name of football — to the point of heartwarming.

Maybe the European sports/hate nexus points simply seem more convoluted from a distance. Maybe our own such incidents here in ’Merica are just as knotty when seen from the outside. But there does seem to be something inimitably European in how an incident, revved by the still-raw nerves of the 20th century, can ping, savagely and rapid-fire, from the pitch to the stage to the corridors of power. And so, while Anelka awaits word of a possible suspension, and French government officials move to ban the quenelle’s creator from performing in public, over in San Antonio, Parker might be plenty pleased he can just delete Dieudonné’s number from his phone and move on.