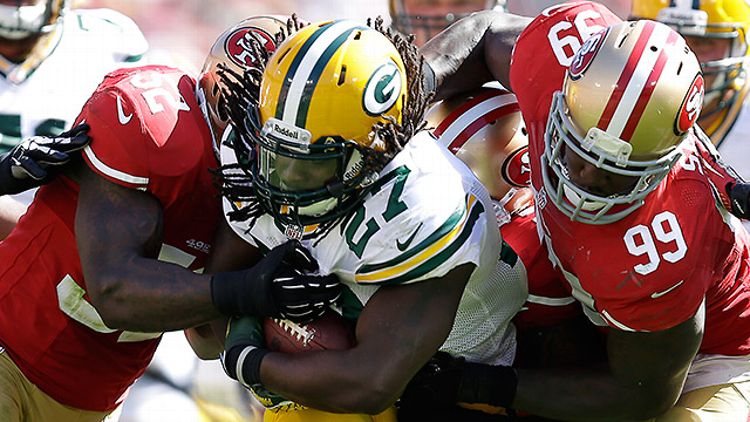 Over the past several seasons, no quarterback has thrown the ball under more challenging circumstances than Aaron Rodgers. I’m not referring to injuries, or coaching controversies, or even the patchwork line behind which Rodgers has played, though the line has certainly been a factor. I mean the very structure Rodgers has faced: defensive backs lined up right in his receivers’ faces, supported by multiple deep safeties 15 or even 20 yards downfield, and linebackers and defensive linemen concerned almost solely with the quarterback’s ability to throw. In short: Defenses across the NFL have long sold out to slow Green Bay’s passing game while effectively ignoring its running game.

And, for the most part, Green Bay wasn’t able to do anything about it. Following Ryan Grant’s 1,200-yard campaign in 2009, the Packers fielded a running game ranging from mediocre to flat-out bad over the next three seasons behind a revolving door of illustrious runners such as Brandon Jackson, James Starks, Alex Green, and DuJuan Harris. Remarkably, Green Bay fielded one of the best offenses in the league and won a Super Bowl with one offensive hand tied behind its back, as Rodgers excelled despite the disadvantage of not playing in a balanced attack. Peers like Peyton Manning, Tom Brady, and Drew Brees haven’t needed to contend with running games as consistently bad as Green Bay’s, at least for the majority of their careers, while promising passers like Russell Wilson, Nick Foles, and Colin Kaepernick don’t face the type of pass-focused defenses Rodgers sees week in and week out. When facing the Seahawks, Eagles, or 49ers, the first order of business is stopping the run; when facing the Packers, the first and only order of business has been stopping Rodgers.

Until this season. Eddie Lacy, a 230-pound rookie running back out of Alabama, has given Green Bay’s offense a new dimension. Playing much of the year with Rodgers sidelined by a broken collarbone, Lacy has racked up 1,178 yards and 11 touchdowns — many of them right over the top of would-be tacklers. More importantly, Lacy has given the Packers the ability to threaten defenses with power as well as precision passing.

Lacy has emerged as a throwback kind of player, and Green Bay has featured him in throwback fashion in turn, implementing storied plays from Packers lore. When Green Bay wanted to run the ball in recent seasons, it typically relied on draw plays or quick-hitting zone plays designed simply to gain a few obvious yards against defenses ignoring the run. With Lacy, however, Green Bay has made frequent use of “power” running schemes: down blocks, double-teams, and linemen pulling to lead the way.

The 2013 Packers have also resurrected a version of the most famous play in Green Bay history, the legendary Lombardi Sweep, also known simply as the Packers Sweep. The play was the backbone of the Lombardi teams that won five NFL championships and two Super Bowls. On the Packers Sweep, Paul Hornung or Jim Taylor would sweep behind the blocks of pulling guards Jerry Kramer and Fuzzy Thurston, who would create, in Lombardi’s famous words, “a seal here and a seal here,” forming an “alley.” The 2013 Packers have repeatedly run a version of this play in order to get Lacy on the edge with pulling linemen paving the way. The results have looked something like this:

Though these Packers often run the sweep from the shotgun and with three split receivers, it’s the same basic concept that Lombardi’s teams executed to perfection. In the GIF above, the pass-first formation caused Chicago to put its safeties so deep to defend the threat of Rodgers throwing that they were nonfactors against Lacy.

The Packers aren’t suddenly a run-first team, and this isn’t Lacy’s offense. But thanks to the rookie’s presence in the backfield and the renaissance of the Packers Sweep, Green Bay has forced its opponents to at least respect the run.

Even with Lacy nursing injuries entering wild-card weekend, I expect the 49ers to defend the Packers much more honestly than they did in last year’s playoffs, and for the threat of Lacy’s power running to open things up for Rodgers and Green Bay’s talented receivers — exactly how Lombardi drew it up.