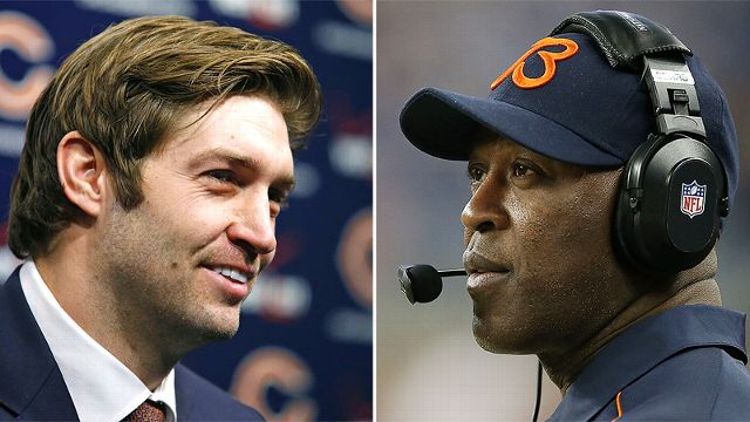 That didn’t take long. As they began their more than 90 minutes in front of the mic yesterday, the Transparency Twins — Marc Trestman and Phil Emery — announced that the Bears had made three signings. They saved the big one for last: Jay Cutler, owner of most of the franchise’s all-time passing records, had signed a seven-year deal that officially makes him the quarterback of the Trestman-era Bears.

The deal is more or less a three-year contract with $54 million guaranteed and a team option for the next four years after that. That guaranteed figure puts Cutler just below Tony Romo and just above Joe Flacco with the deals they received last offseason.

Unlike Romo, or Matt Ryan, or Matthew Stafford, or Aaron Rodgers, the deal for Cutler wasn’t made long before it had to be. This past season was the last of Cutler’s contract, and Emery made it clear before the year began that the Bears had no intention of re-signing Cutler before they saw him in Trestman’s offense. Some thought that Cutler’s future was in doubt through Week 17, but based on Emery’s comments yesterday — and how quickly the Bears acted after the season ended — this was a decision that had been made a while ago. Emery said he knew after the first three games that things were headed in the right direction with his team’s new offense.

They were, and they stayed that way. Even when Cutler went down — first with a groin injury and then with a high-ankle sprain that may have been caused by playing with a groin injury — Chicago’s offense never faltered. Backup Josh McCown threw for 13 touchdowns and just one interception on his way to a league-best 85.1 QBR in his five starts, and the rumblings began that the 34-year-old McCown, and not Cutler, should finish out the season. McCown didn’t, of course, and when Cutler did return, it was that familiar mix of brilliant and maddening with which Chicago is now very familiar.

As a Bears’ fan, my line on Cutler’s future was the same for most of the year. The offensive turnaround (from 24th in offensive DVOA last season to sixth this year) and McCown’s performance earned Trestman a right to choose his own quarterback. If that was Cutler, then it was Cutler. That the Bears leveraged two entire drafts for him, or that he was the only viable quarterback Chicago had seen in a quarter-century shouldn’t have mattered. This was a chance to move on if that’s what a new regime wanted.

The dollar figure gives a good indication of how both sides viewed each other in negotiations. It’s likely that Cutler could have gotten more if he had chosen to test free agency, but as he said yesterday, there may not be a better situation for an NFL quarterback than the one in Chicago. With Brandon Marshall, Alshon Jeffery, Matt Forte, Martellus Bennett, and especially Trestman, Chicago has turned from the place where wide receivers go to die to the place where quarterbacks go to thrive. On the Bears’ side, they paid Cutler for what he is — a very good quarterback, one capable of winning a Super Bowl and being a franchise cornerstone, but not one of the best five quarterbacks in football. The Bears have plenty of decisions to make elsewhere, but Cutler’s $18 million average salary doesn’t figure to cripple them while finding a few defensive pieces in free agency.

There is a frustration among Bears fans about Cutler being rewarded for the past five seasons. That’s not how contracts work. The Bears are paying Cutler for what they think he’ll be over the next three years, and based on this year, that’s a significantly better player than the one Chicago saw from 2009 to 2012. The year before Emery took over, the Bears’ wide receiving corps went as such: Roy Williams, Johnny Knox, Devin Hester, Dane Sanzenbacher, Earl Bennett, and Kellen Davis. They also had the second-worst adjusted sack rate in football (compared to the sixth-best this year). Those are circumstances under which no quarterback could succeed. This year, with the proper help in place, Cutler played his best football as a Bear and maybe the best football of his career. Now, he’ll have a chance to keep that going as the best Bears’ offense in more than 30 years can pick up right where it left off.

On the same day that Cutler was getting paid, his old coach Lovie Smith was getting a second chance. This is a bit ironic, only because Cutler helped get Smith fired. Now, I don’t mean that Cutler actively helped get Smith fired. I don’t believe there was a conversation between Cutler and Emery that involved a “him or me” ultimatum. But Smith eventually lost his job as head coach of the Chicago Bears (after a 10-6 finish) because he never found a way to turn Cutler into anything close to what the franchise hoped he would be.

This is important to keep in mind when considering Smith’s new role as head coach of the Tampa Bay Buccaneers. Justifiably, the news of Smith’s hiring has been met mostly with approval. Smith won a lot of games in Chicago, and he did so behind a defense that was consistently one of the best in football. In his nine seasons, the Bears finished in the top 10 in defensive DVOA eight times, including finishing no. 1 in his final year. Smith knows how to build defenses, and his new team has its share of building blocks.

The core of Tampa Bay’s defense (which finished eighth in DVOA despite a 4-12 record) consists of Lavonte David, Gerald McCoy, and Darrelle Revis. The first two couldn’t fit more perfectly into what Smith wants to do. Penetrating three-technique tackles have a history of success in this scheme (e.g., Tommie Harris and Henry Melton before injuries), and McCoy is likely the best one Smith has worked with as a head coach. David is the sort of attacking force Smith covets, and it seems like he could be a faster version of Lance Briggs, who went to seven consecutive Pro Bowls after Smith came to Chicago.

Smith’s defense is often given the Tampa 2 label, but it’s a categorization that’s misleading in two ways. First, the idea of a basic Cover 2 shell comes with visions of a simple, conservative, two-deep defense designed to prevent big plays. With some coaches that might be the case, but not with the way Smith teaches it. For most teams, creating turnovers and turning them into big plays doesn’t translate from year to year, but there’s a reason Smith’s teams always seemed to be taking the ball away and scoring with it. The mind-set of Smith’s Cover 2 is anything but conservative; it’s an attacking scheme that plays fast and gets 11 helmets — and 22 hands — around the ball all the time. It may not be as exotic as what Dick LeBeau does, but it’s certainly not boring.

The other misconception about Smith’s scheme is that “2” sitting in its title, and that brings us to Revis. Most of the talk about Revis early in this season was about how Greg Schiano’s defense was taking the best man-coverage corner in the world and forcing him into a zone scheme that suited neither him nor the Bucs’ defense. Bringing in a coach famous for playing a nominally zone defense doesn’t seem like a way to fix that, but really, it’s been a long time since Smith’s teams have spent most of their time sitting back in Cover 2.

In his final few years in Chicago, with Rod Marinelli in place as defensive coordinator, the Bears ran a host of different coverages. Yes, there was still some Cover 2, but there was also plenty of Cover 3 and a lot more man. The change was evident in how it showed up with Charles Tillman, who, like Revis, is probably more suited as a physical, at-the-line-of-scrimmage cornerback. The way Smith’s teams play Cover 2, Revis should still be able to take advantage of his physicality and actually show off his underrated abilities as a tackler, but the point here is that Smith is willing to adapt for a special player. All of that is combined with Smith’s reputation as one of the league’s most player-friendly coaches. When Smith was fired a year ago, several Bears weren’t shy in expressing their distaste for the decision. Players love playing for Smith, and his coaching style figures to be a welcome change for those who didn’t take to Schiano’s way of doing things.

Most coaches would be able to take advantage of the strengths a team already has in place, but it will be how Smith deals with the shortcomings on the Bucs’ defense that define how quickly he make this a top-five group. Smith was able to hide bad-to-mediocre safety play for most of his time in Chicago, which should make the pairing he now has in Tampa Bay seem like a blessing. The real problem is likely what Smith and his new staff have around McCoy. Smith’s defenses are predicated on generating a pass rush with the front four. In his final three years with Chicago, the Bears brought just four rushers on 73.3 percent of snaps, according to Football Outsiders. That puts them right around the top five. Smith doesn’t blitz much and right now, that’s not something the Bucs are set up to do. Outside of McCoy, Tampa Bay doesn’t have a single rusher on its defensive line, and defensive end is probably the first place it will have to look in free agency.

Smith’s only down year in Chicago was 2009, when his defense finished 21st in defensive DVOA. That offseason, the Bears went out and got Julius Peppers and hired Marinelli as their defensive line coach. The next year, they were back in the top five. Peppers probably isn’t — and shouldn’t be — an option, but Marinelli might be. The rumor is that Smith wants Marinelli as his defensive coordinator, which is news that should make McCoy salivate.

Again, Smith’s defensive staff has never been the problem. It’s who he hires as his offensive coordinator that will eventually matter, and it looks like the choice is Jeff Tedford — former head coach at Cal. Coming in with no NFL experience, it’s certainly an unconventional choice, but Smith’s track record with conventional choices is wanting. Two of his three failed offensive coordinators in Chicago had been NFL head coaches at some point, and that didn’t seem to matter. Smith will be relying on Tedford to take an offense led by a young quarterback and have it keep pace with whatever Smith can build on defense. Whether that happens will ultimately be what defines success for Smith in his new stop, just as it did at his old one.

Q&A: David West on the Heat, the Pacers, and Playing With an Edge