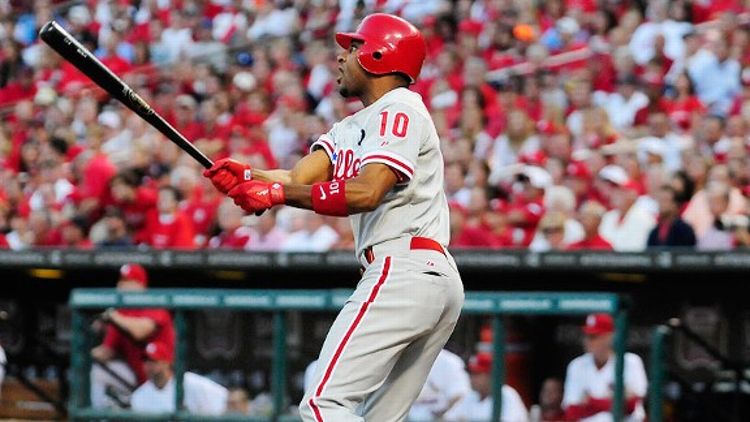 Guess we can’t talk about the Red Sox anymore, right? Well that’s OK! Because Grantland is home to two confirmed Phillies fans, Andy Greenwald and Chris Ryan. We asked for their thoughts on Philadelphia’s Game 3 win over St. Louis. Take it away, Andy and Chris …

Chris Ryan: Andy! Did you decide to go with the “I Left My Heart In Ben Francisco” tat? Or did you get the one in Olde English font that says, “Benny Fresh Direct”? Either way, I hope you are really sticking to your tattoo aftercare program.

Ben Francisco’s home run was a pretty cathartic and shocking turn of events last night. Shocking because Ben Francisco hit a home run and cathartic because you, me and the poor, huddled, Philly ex-pat masses at a Brooklyn bar had been suffering through six full innings of Tony La Russa Birthday Baseball. I think Wu-Tang should could record an appendix to their famous “torture skit,” that goes, “I’ll fuckin’ … I’ll fuckin’ foul off a dozen pitches and wear down your starter and then poke an opposite-field single and double steal all day … and I’ll grow a chin beard.”

The Cardinals are a difficult team to beat, but they’re even more difficult to watch. I don’t begrudge any city their sporting pride, so I’ll just say, watching Cole Hamels die by 1,000 cuts is not my idea of a fun night out with friends. Funny thing happened on the way to our old no. 1 starter melting down, though: he didn’t. In fact, Mr. Tapping The Source seemed to get more and more feisty as the game went on. You don’t want to see Cole Hamels angry … it’s totally bogus, man.

What do you think? Did the Phillies win? Or did the Cards lose? How do you feel about Hunter Pence’s pre-emptive strike style of plate discipline? Did you ever doubt Ryan Madson getting through Pujols and Berkman? Is this all over but the (Tony La Russa) shouting (at the umpire)? Did you have fun? I don’t think you can really call any walk over the bridge to victory that is Bastardo-Lidge-Madson, “fun.” It’s more like a walk over the bridge from The Mothman Prophecies.

Andy Greenwald: Last night, as we stumbled, dazed, into a mild Brooklyn evening that felt 100 hours later than it actually was, I turned to you and said, “That was fun.” Except, no, I didn’t say it like that. It was more like: “That was fun?” One wrong swing by our back-up back-up outfielder, one errant meatball tossed by our carb-lugging closer, one last bit of infuriating Cajun mumbo-gumbo from the immortal Ryan Theriot and everything would have been different. For one thing, you would have been carrying me out onto Court Street. And also, everything we had suffered through over the previous three-plus hours would never, ever have been described as “fun.”

Chris, I am a terrible baseball fan. You know this. Not terrible because I don’t pay attention or think the designated-hitter rule is a good idea. Terrible in that every pitch thrown by the Phillies is personal, every loss a mini-disaster. If the bullpen blows a game, I am one miserable Bastardo to be around. So while it may have been possible for chin-stroking aesthetes to proclaim Game 3 “great baseball” and “entertaining theater,” I was a wreck. Sure, my pre-game prediction of Jaime Garcia tossing a perfect game through five didn’t come true (he gave up two hits!), but it remained clear that the squirrel running wild in the outfield had a better chance of stringing together a quality at bat against the Cardinals lefty than, say, Hunter Pence. (In a related story, Pence is the one who stole, hoarded and buried the squirrel’s acorns, thus angering it in the first place. Luckily, Roy Oswalt was on hand to trap and eat the squirrel before boarding the team bus back to the hotel. Joe Blanton asked for seconds.)

But then Tony La Russa managed to overmanage, and Ben Francisco smiled for the first time in months and suddenly we were ahead — and the real misery started. It became not a game of inches, but a game of beverages. A fellow Philadelphian at the bar — a guy who suspiciously showed up to corroborate your oft-repeated tales of a Center City boyhood spent as a “spark plug backstop” in local Little League, I should add — switched to Yuengling. It seemed to work. I followed suit. Vance Worley gave up a run but it got me drunker, which was probably a fair trade. Then you switched to coffee. You lunatic! “Coffee is for closers!” I shouted, unaware that Charlie Manuel was thinking just the same thing. Five high-wire outs later, we were in the street. Well, I was. Due to your increased caffeine intake, I think you were orbiting Jupiter. But the game was over. It’s hard to believe that in an ideal world this sort of Xanax-demanding, liver-annihilating behavior will continue for three more weeks. It’ll be fun?