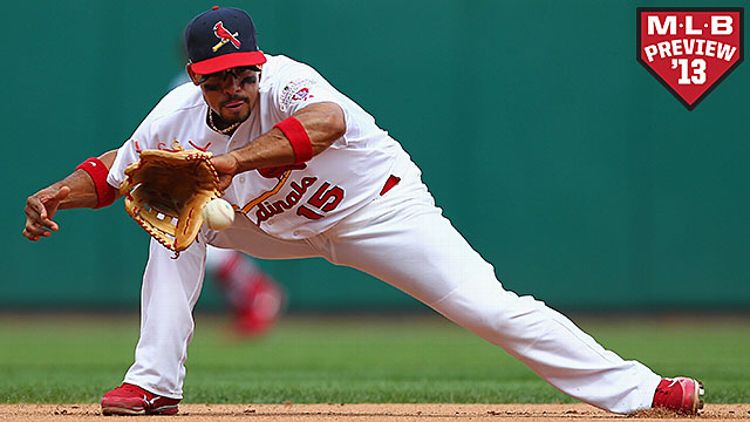 Martin Perez might be out until May with a broken left forearm, while Rafael Furcal has been shut down with lingering pain in his elbow, raising further questions about two of the biggest weak spots for two wannabe contenders.

Two years ago, Texas and St. Louis met in the World Series. Both teams saw their performance dip a bit in 2012 — the Cardinals lopping two wins off their regular-season total, making it to the brink of a World Series return trip and falling just short, the Rangers dropping by three wins, then bowing out in the wild-card elimination game. Both might not be so lucky this year, with the Cardinals’ middle infield and Rangers’ rotation threatening to derail another round of October baseball.

The two teams ended up in this place for very different reasons. The Cardinals created their own problems by not making a serious run at any middle-infield help, other than some flirting with Marco Scutaro. This despite Furcal coming off a season in which he hit just .264/.325/.346, continued to see a decline in his defense, missed 41 games, and looked like a very shaky bet to stay upright and productive in 2013 after bypassing offseason surgery that might’ve helped fix his arm heading into his age-35 season. And while few questioned bringing Daniel Descalso back as the team’s starting second baseman, he was coming off a season in which he hit an abysmal .227/.303/.324. Maybe the Cardinals were banking on Furcal holding up for the final year of his contract before going shopping in earnest next winter. Maybe they figured Kolten Wong is close to cracking the big leagues. Or maybe they didn’t like a free-agent market that had Stephen Drew, Hiroyuki Nakajima, overbidding on Scutaro, and returning B.J. Upton to shortstop for the first time in a decade as the best available options.

The Rangers, on the other hand, pushed hard to land a top starter this winter. The Zack Greinke bidding war came down to Texas and the Dodgers, and the Rangers also targeted Justin Upton in a three-team trade with the Royals and Diamondbacks, a move that wouldn’t have helped the rotation, but would’ve added a potential six-win player who could’ve made up for Josh Hamilton’s departure and made up for some potential issues with the starting five. In the end, Greinke became a Dodger, and Upton a Brave.

Neither team has any great in-house options to cover for the losses. The Cardinals signed Ronny Cedeno to a cheap one-year deal, figuring having a player who was a starting major league shortstop as recently as two years ago would constitute solid insurance. But Cedeno’s got a mixed track record, alternating terrible offensive seasons with lousy defensive showings, and generally profiling as a near-replacement player. Pete Kozma hit a lofty .340 in 16 regular-season games last year, starting the Cardinals’ final 29 games, including all 13 in the playoffs; he also posted a wildly unsustainable .415 batting average on balls in play during that brief regular-season stint, and projects as a below-average defender at short with a career minor league batting average of .236 and a .308 on-base percentage. Twenty-four-year-old fringe prospect Ryan Jackson’s minor league offensive numbers aren’t much better, but he’s the best glove of the bunch and likely the best in-house choice to replace Furcal … even if he might struggle to sniff league-average contributions. Given how tough it is to find a solid two-way shortstop in the best of times — let alone in March — the Cardinals appear stuck for now. With the Reds looking like clear favorites in the NL Central, St. Louis might have to scratch and claw for a wild-card spot. For all the depth afforded by beastly outfield prospect Oscar Taveras and an armada of young pitching, the Cardinals’ lack of palatable middle-infield options both now and even before the Furcal injury makes you wonder if they’ll come back to haunt them.

Texas’s rotation is in much better shape, relatively speaking. Yu Darvish emerged as a front-line pitcher as last season wore on, while Matt Harrison and Derek Holland have settled in as solid mid-rotation starters. But Martin Perez’s bouts of wildness, coupled with Neftali Feliz and Colby Lewis being out for the first few months of 2013 after arm surgeries, gave Texas a weird combination of theoretical depth and no one reliable to man the fifth starter’s job. Factor in additional questions over Alexi Ogando’s ability to flip from bullpen duty back to a full-time starter’s role, and the back of the rotation figured to be an issue. Kyle Lohse is still out there and could be a valuable addition to the staff. But the Rangers have been adamant about preserving young assets, be they draft picks or top prospects already in the system; if they passed on Michael Bourn, wouldn’t top the Dodgers on Greinke despite a reported right of final refusal, and let Hamilton get away, you wonder if they’d burn a pick on Lohse, risking that the 34-year-old righty might turn into a pumpkin back in the American League at hitter-happy Texas. Leveraging the off-day-filled first couple of weeks of the season then trying to get by with Robbie Ross as SP5 would seem the path of least resistance, in the hopes that Perez returns in May, or that Lewis or Feliz seizes the job once back to full health. But that wait-and-see approach carries its own set of worries, with the Angels loading up, the A’s coming off the AL West title, and the East expected to spit out its usual slate of contenders.

In both cases, the worst-case scenario might be dropping an extra game in the standings, maybe two at the outside. But with other subtractions from recently potent cores — the Cardinals losing Chris Carpenter and wondering about Jaime Garcia, the Rangers sans Hamilton, Mike Napoli, and others — a game or two may well be what causes both teams to fall just short of the playoffs.

One more quick one for you. Behold, a clip of Vladimir Guerrero, (password to watch is csm1) on the comeback trail.

In this video, we see highlights of Bad Vlad fielding ground balls, shagging a few flies, running, and throwing … but mostly hitting bombs. Not just garden-variety bombs. We’re talking majestic blasts over the weather-worn fences of a raggedy ballfield somewhere in the Dominican, with goats looking on in the background. Vlad’s being interviewed, talking about not getting a clean shot when the Jays signed him to a minor league deal last year, how he still has some goals left to achieve (including 500 home runs), and how he’d love to make it back to the big leagues.

But really … Vlad. Bombs. Goats. That should suffice.