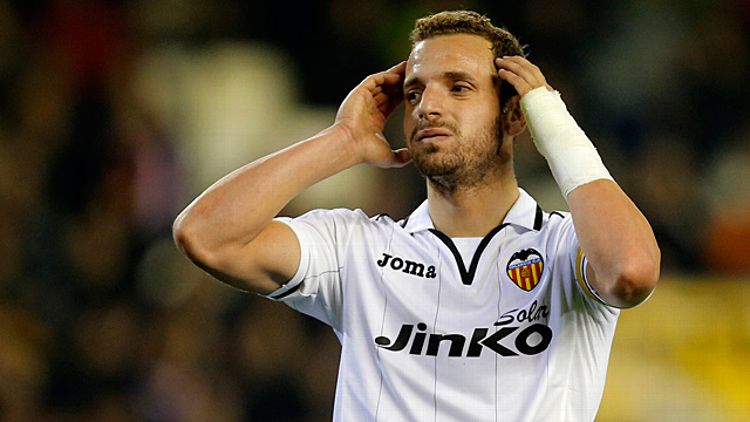 By the standard of teams that perennially compete in Europe, Valencia has had a rough couple of years. The city of Valencia has been as hard hit by the European economic downturn as any city outside of Greece. The massive Nou Mestalla stadium being constructed to generate revenue that would allow Los Che to compete with La Liga giants Barcelona and Real Madrid remains half-built. Debt issues forced the team to sell off superstars Jordi Alba, David Silva, and Juan Mata, while poor internal evaluation led them to sell off blossoming star Isco (whom they replaced with the perpetually injured Sergio Canales). Argentine Mauricio Pellegrino, a stalwart defender for the team during its early 00’s glory days, was hired and fired as manager over the course of half a season. The club has been so burdened by financial problems that the supporters organization set up to manage the franchise has defaulted, forcing the city itself to step in to prop up the club. Los Che currently sit in fifth place in La Liga, as close to 14th as third. And 90 minutes into their first leg against Paris Saint-Germain, they were staring down a 2-0 deficit against a team with Zlatan Ibrahimovic and Ezequiel Lavezzi.

And yet, through all of this, there is hope. With a stoppage time goal and an Ibrahimovic red card, Valencia finds itself with a chance of advancing to the Champions League quarterfinals. Just a chance. But, hey, I’m saying there’s a chance. Hence, Valencia is your Champions League underdog of the week.

(Yes, I realize that Valencia is not the biggest underdog this week; that title belongs to Celtic. Sometimes, though, you can be an underdog to the point where you aren’t so much a dog anymore; you’re a carcass. Surrendering three goals to Juventus in the first leg reduced Celtic to carcass status. Apologies to my Scottish brethren, but you have no chance.)

How did Valencia get here?

Valencia qualified for the Champions League with their third consecutive third-place finish in La Liga. They then equaled tournament favorite Bayern Munich in Group D with 13 points, finishing second only on goal differential. The two European powers easily outpaced BATE Borisov and Lille, with Munich’s deeply confusing loss to the Belarusian champions representing their only dropped points to the two eliminated clubs. (Side note: Munich has two losses across all competitions this season, both coming in an October stretch during which Munich won their other six matches while outscoring opponents 21-0. That was their worst stretch of the season. Be terrified.)

Why is Valencia an underdog?

Valencia is a good team that has struggled against other good teams all season long. They made it to the quarterfinals of the Copa del Rey, beating up on lesser opponents, before getting unceremoniously dumped by Real Madrid. Valencia’s best result of the season was probably their home draw against Bayern after going down to 10-men, but even that result has the asterisk of conceding a late equalizer. This is a team built to survive, hold on to a top five slot in La Liga (while hoping Malaga doesn’t get reinstated), and qualify for Champions League. Greater aspirations than that were likely cast aside with Pellegrino in December. That they need two goals in Paris to advance doesn’t bode well. Basically, Valencia is positioned like Arsenal would be, if for some reason Tottenham stopped paying their wage bill and was banned from European play (cue the dreaming of Gunners).

Valencia’s poor performance against quality opponents is a symptom of a larger disease on the Spanish coast: a massive financial disparity between themselves and the likes of Madrid, Barcelona, and PSG. You can’t compete if you’re forced to sell the likes of Mata, David Villa, and Silva to pay down debt. Not when you’re up against a team with the resources of the royal family of Qatar. PSG has Ibrahimovic on astronomical wages. They’ve also acquired a host of extremely expensive and high-quality talent, including Thiago Silva, Ezequiel Lavezzi, Lucas Moura, and Javier Pastore filling out a squad designed to challenge for a Champions League title this season. Recent acquisition David Beckham is still David Beckham and adds his lethal set-play threat to a team filled with players able to create chances through open play. PSG, though, is not invincible; after an unbeaten run that had stretched back to early December, the Parisians have dropped two of their last three matches. Both of those losses were away to Ligue Un relegation candidates; Valencia will hope this slip represents a loss of form rather than a mere loss of concentration.

How does Valencia play?

Valencia under Rafa Benitez was one of the progenitors of the ubiquitous modern 4-2-3-1, and they continue to play with that formation. According to Michael Cox, who suffered through Valencia’s 5-0 thrashing at the hands of Real Madrid, Los Che has had issues maintaining the width the system demands when played at the highest level. And although the appointment of new manager Ernesto Valverde has seen a return to an emphasis on short passing, Valencia is still missing the attacking impetus that current Barcelona fullback Jordi Alba provided for them in past seasons. With Valencia forced to chase goals on the road and star PSG center back Thiago Silva set to return, striker Roberto Soldado will need wide support to come from somewhere.

Further, with center back Adil Rami set to miss the match with a thigh injury, Valencia will need stout central defensive coverage from their midfield. Fernando Gago is out on loan, leaving players out of position across the center of the Valencia defense. Even without Zlatan, PSG presents a fierce challenge, and the Spaniards cannot afford to concede more than one goal.

Who’s the man to watch for Valencia?

Valencia needs goals on the road, and their one eight-figure acquisition over the past few seasons is prolific Spanish striker Roberto Soldado. A classic no. 9, Soldado will draw the constant attention of the defense. With PSG likely able to field a first-choice center-back pairing, it’s possible that he’ll be marked out of goal-scoring opportunities. If this happens, Soldado’s hold-up play and ability to draw focus will still be key; if Valencia can mount a comeback, it will be because of Soldado’s presence. That’s a lot of ifs, though.

So what’s a likely result on Tuesday?

1-0 (3-1 PSG on agg). With defensive reinforcements arriving for the Parisians, an improved Valencia passing game will run into a team with the talent needed to snuff out their attacks. And with Valencia’s back line decimated by injury, it seems unlikely the Spaniards will keep a clean sheet. If PSG gets a goal early, they should be able to control the match, and hold on to move into the Champions League quarterfinals, leaving Los Che with only their league position to focus on for the remainder of the season.