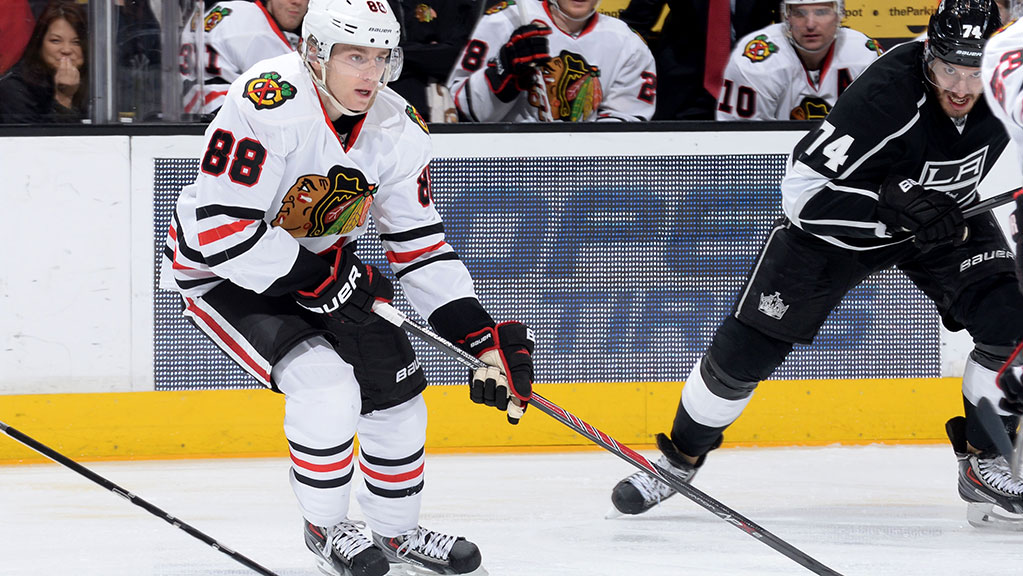 Chicago Blackhawks right wing Patrick Kane put on a stellar performance against the Los Angeles Kings despite hearing about the death of his grandfather shortly before game time. Kane finished with two goals and one assist to carry his team to a 5-3 victory at Staples Center.

In other news from Chicago, Bulls center Joakim Noah dropped big f-bombs at the referees after receiving his second technical foul last night against the Kings. He was immediately ejected from the game.

For more updates on college basketball, the NBA, and soccer, read Spike Friedman’s “About Last Night.”

Matt Leone at Polygon wrote an oral history of Street Fighter II that is long and well, well worth your time. And anyone who argues that mashing buttons during a Chun-Li—Guile fight does not count as sports needs to rediscover childhood.

Also, on Twitter yesterday, the Wizards and Trail Blazers had some fun tongue-in-cheek banter after Washington beat Portland, 100-90:

Is it too late to join the Eastern Conference? Asking for a friend.

It's never too late, come back anytime #WizBlazers RT @trailblazers Is it too late to join the Eastern Conference? Asking for a friend.

Today’s NBA games all qualify for “A Fate Worse Than Death,” but if you must, check out Suns-Bulls at 9 p.m. Phoenix is seeking its longest win streak in almost four years and is making its way up the Western Conference standings (they currently sit at sixth). The Suns should take this one, especially if Goran Dragic can continue performing despite a sore left elbow. Other games on the schedule: Pacers-Hawks, Lakers-Timberwolves, Bobcats-Warriors.

In college hoops, quite a few top-25 teams are playing, though no matchup particularly stands out. No. 3 Florida, no. 15 Texas, and no. 8 Kansas all overshadow their opponents (Missouri, TCU, and Baylor, respectively), but each of those games should be entertaining. If you’re looking for a closer game with lots of personality, you’ll want to catch Ole Miss at no. 18 Kentucky at 7 p.m. The Wildcats boast a 21-game home winning streak and the fresh faces of Aaron Harrison, James Young, and Julius Randle. But with Marshall Henderson in the game, things could swing either way. Henderson currently leads the SEC in 3-pointers and 3-point attempts (77 for 212). You can find Big Ten, ACC, and AAC action here.

Lots of NHL games for you to watch tonight, though none we would wholeheartedly recommend. There’s the Avalanche-Rangers at 7 p.m., which is probably the most promising of the early bunch. Then at 8 p.m., you can catch the Lightning’s slightly depleted offense play the down-in-the-dumps Wild, who are coming off two close losses. Here is the full listing of games for tonight.

Anonymous in Sochi: No Turning Back