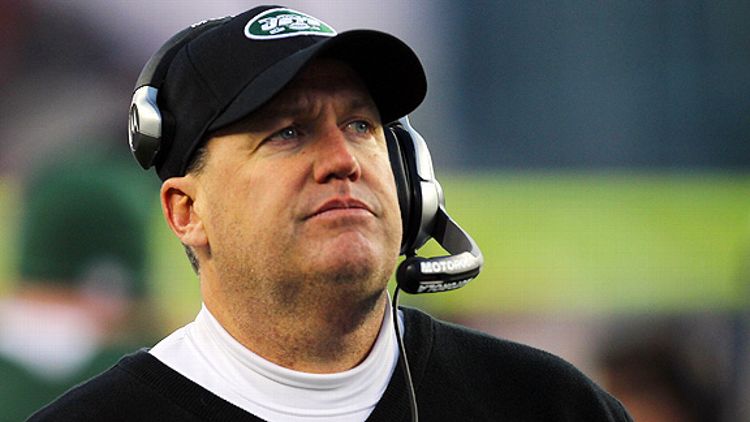 Dallas Cowboys defensive coordinator Rob Ryan has a lot in common with his brother, New York Jets coach Rex Ryan. They’re twins, so he looks a lot like him … at least he would if Rex grew his hair out, crushed some KFC “sadness bowls” (© Patton Oswalt), got into a time machine and went to a 1976 .38 Special show in Gainesville, Fla. The other thing they have in common is their almost admirable complete disregard for the idea of bulletin board material.

NFL training camps have just begun and most of the chatter so far has centered on new arrivals (via trades, the draft and free agency) and absentees (hold outs, guys carrying injuries). This kind of talk holds very little interest for the Ryan brothers, who are already chirping like its November.

Earlier this week, in response to a question regarding the lack of big-time free agent signings by the Cowboys, Rob Ryan had this to say: “I’ve got three bullies over there waiting for Thursday … These are proven players, and that’s what we need. I don’t know if we win the all-hype team, I think that might have gone to somebody else, but we’re going to beat their ass when we play them.”

In the parlance of hip-hop, this would be called a subliminal, though not a particularly subtle one. For the sake of clarity, though, here’s a translation: he’s talking about the Philadelphia Eagles.

One assumes Ryan’s rage was due to Vince Young’s declaration that the Eagles were a “dream team.” Young’s statement has certainly provided plenty of fodder for talk radio and it obviously got Rob Ryan in a real jumpy mood. It’s worth noting, as the blog Bleeding Green Nation did, that Young followed the “dream team” line by saying he would be willing to be the “scout team quarterback” if it would help the Eagles. That probably wouldn’t matter to Rob Ryan any more than it would to Giants wide receiver Mario Manningham who said, “We don’t put nobody on a pedestal. We treat all our opponents the same even if they got a hundred dream teams it don’t matter.”

Despite the free agent haul, it’s not all dream team trust exercises in Philly. Wide receiver DeSean Jackson is still holding out and it seems like Asante Samuel is feeling like the third wheel (or cornerback). “If they’re tired of my big-play-making ability, maybe they’ll ship me out,” Samuel reportedly said. “Maybe they’ll keep me. I don’t know. Who knows?”

Perhaps it’s not the best idea to give the Eagles, new and old, something to rally around, a feeling of being the division’s most hated.

But perhaps it doesn’t matter. For several seasons now, Rob Ryan’s brother, Rex, has needled, bragged, dissed, predicted, guaranteed and prognosticated about his Jets and what to expect from them. Given the amount he’s had to say about the New England Patriots, you’d think that, if the bulletin board theory (that teams somehow find an extra gear, a new level of motivation, when they are challenged publicly by a player or coach from the opposing team) carried any weight, the Pats would be extra fired up to play the Jets. Yet Rex Ryan is 3-2 against the Patriots.

With that record, it should come as no surprise that Rex is already at it again. He opened fire, mildly enough, on Monday, when he openly appealed to the rest of the league to beat the Pats. “Again, I think we have to find somebody out there to beat New England besides us and I think that would help. Anybody out there that wants to sign up: Are you good enough as a team to beat the New England Patriots? Forget about us, are you good enough to go out there and beat the New England Patriots? I’m challenging the league.”

To this, Patriots coach Bill Belichick responded in a rather Belichickian fashion, “I didn’t see that one, and don’t think I’ve seen any other ones in a long time, so I’m just focused on going out there and trying to improve today.”

The Kyle Orton Problem
A New Boss for U.S. Soccer
Flocking to the Eagles