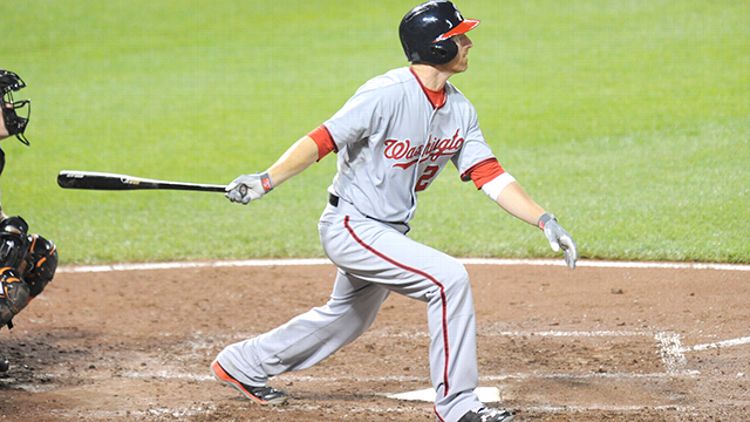 We launched our division-by-division early trade deadline preview on Monday with a look at the NL Central. Today, the surprisingly weak NL East.

We’re just shy of the season’s halfway point, and the Braves are the only team in their division with a better-than-.500 record, with the NL East also sporting the worst cumulative record of any division by a comfortable margin. Granted, unless you were an overly optimistic Phillies fan back in March, the Nationals’ lousy start is the only surprise of the bunch. But here’s the thing: Except for a hot first 15 games, the Braves have been mediocre in their own right, going just 31-31 since.

So the Braves have something of a dilemma. Six games clear of their closest competitor, there’s no great urgency to make a deal the way there might be for underachieving clubs like the Giants or, for that matter, the Nationals. But if the past 62 games are a better barometer of this team’s quality than the first 15, then maybe reinforcements should be in order.

The big surprise has been how Atlanta has reached this point. After trading for Justin Upton and signing B.J. Upton, the expectation was that the new Upton Here–plus–Jason Heyward outfield would produce a ton of runs, steal lots of bases, and form the backbone of a loaded Braves lineup. That’s not what’s happened, to say the least. Even after a monstrous slump, Justin Upton has still been the best of the three by a mile, with B.J. Upton hitting .175/.273/.316 and Heyward needing a big hot streak just to eke back above the Mendoza line. The Braves are tied for a decent fifth in the National League in runs scored, thanks in part to unlikely contributions from role players like Evan Gattis and Jordan Schafer. But the real story of this team has been its run prevention: No team has allowed fewer runs per game than have the Braves.

Given those numbers, you’d figure that finding a bat or two would be this team’s logical deadline goal. But this is a pretty set lineup, even if it does have weaknesses. The Braves’ eight current everyday players are the same eight they expected to field on Opening Day. The Uptons and Heyward are too good to not expect from them much stronger second-half numbers. Dan Uggla is hitting a buck-ninety-five with his usual leaky defense, but the Braves are stuck with his huge contract and might not be ready to admit that he’s a full-on albatross at this point. Journeyman third baseman Chris Johnson is doing it with mirrors (and a .401 batting average on balls in play), but at .320/.360/.470 even the most analytically inclined team wouldn’t dare send such numbers to the bench. The two most obvious fits, then, might be:

• A top-notch lefty reliever if the Braves don’t yet have faith in Luis Avilan and Alex Wood as replacements for the injured Jonny Venters and Eric O’Flaherty.

• A useful lefty bat who could slide in at either second or third as insurance for Uggla and Johnson or maybe even claim something close to regular playing time — I’m on Team Luis Valbuena.

The good news here is that the Braves should have the trade chips to get virtually anything they want done. Brandon Beachy is expected to come off the disabled list sometime in the next few days. That gives the team six viable starters, with the first five all putting up league-average or better numbers this season, with two of them (Tim Hudson and Paul Maholm) set to be free agents at year’s end. Should the Braves move one of their current five to the pen, and if so, whom? Would Beachy working as a multi-inning reliever at first make sense? Maybe trade Maholm, whose contract status and pullback after a torrid start would seem to make him expendable? These are good problems to have, especially when none of your current problems are so insurmountable that they require drastic action.

Now here’s an organization almost certain to make moves. It’s tough to imagine a team going from preseason World Series favorites (or at least one of them) to below .500 in late June without taking action. The trick is figuring out what constitutes a true, pressing need, and what holes can be filled simply by players getting healthier or returning to career norms.

As things stand, the Nats own the second-worst offense in baseball, ahead of only the lowly Marlins. Bryce Harper is expected to start a rehab assignment this week and could be back in the lineup next week. Catcher Wilson Ramos is also on the mend, is expected back before the All-Star break, and could provide an upgrade over the sub-replacement-level Kurt Suzuki. Anthony Rendon has already replaced the punchless Danny Espinosa at second, which has helped. But Denard Span, while providing the expected excellent defense, has struggled mightily at bat. Adam LaRoche, the most obvious regression candidate in the history of Western civilization after an out-of-nowhere big season in his walk year at age 32 … has regressed. Jayson Werth can’t stay healthy, and is a shadow of the player he was right before signing his $126 million deal. The offense is riddled with question marks right now, and it’s tough to know how much things will improve with the bats they have.

So of course the latest rumors have the Nationals aggressively perusing the market for … pitching. To be fair, Dan Haren has been a raging disaster as the team’s no. 4 starter, making eight figures just to rub salt in the wound. But with Jordan Zimmermann, Stephen Strasburg, Gio Gonzalez, and Ross Detwiler onboard, it’s hard to see why nabbing another starter is so crucial, especially given the team’s other needs.

GM Ruben Amaro Jr. and his bosses are either delusional, in denial, terribly misguided, or all of the above. Sure, making drastic changes to a team that’s ascended to elite revenue-generating status thanks to big crowds and a pending TV megascore carries risk. But so too does clinging to a group of fading veterans and watching them limit the Phillies to a string of 75-win seasons.

It’s possible to meet halfway, too. Chase Utley is a free agent after this season, Jimmy Rollins after next. Jonathan Papelbon is under team control through 2015, but he’s also a top-of-the-market $13 million closer, a luxury item a rebuilding or even a retooling team can do without. Cash in these three over-30, past-prime former stars for an influx of young talent and you’ve done little to hurt the core of your team, and even less to hurt your future, be it for the next couple years or beyond. Cutting deeper and marketing Cliff Lee could free up $75 million and open all kinds of new possibilities. But assuming Utley and Rollins aren’t re-signed and Roy Halladay rides off into the sunset, there will be enough money coming off the books that the Phillies can retain their top starting pitchers, then start working on building the lineup around young breakout slugger Domonic Brown.

But these are all maybes. The real economic risks associated with a true teardown, combined with the stand-pat desires of those in charge and the risk of self-defeating dissonance mean it’s tough to bank on the Phillies doing what’s probably right for the on-field product: Cashing in as many trade chips as possible, in search of a brighter tomorrow.

Optimism abounds over Matt Harvey and Zack Wheeler. David Wright is still very much a superstar, and the proverbial franchise player. Bobby Parnell has turned into one of the most effective and reliable closers in the league. After that … sadness.

It’s not just that the Mets have a wafer-thin collection of talent after their top few players. It’s that as long as the Wilpons retain control of the team, questions will remain about their finances, and thus their ability and desire to spend real money on talent. SNY’s Matthew Cerrone has speculated that GM Sandy Alderson could fly the coop when his contract expires after the 2014 season, unless his bosses start opening their wallets.

In the meantime, the buzz is that the Mets could be aggressive buyers, not sellers at the deadline, despite their miserable record and slim-to-none playoff chances this year. Assuming the money men don’t object (a big if), Alderson could go after established talent signed to big, long-term deals as a kind of poor man’s version of last summer’s Dodgers–Red Sox megadeal. It’s an intriguing idea, especially when you consider the alternative: The Mets make every non-star on the roster available, and the end result is Marlon Byrd for a box of Gobstoppers.

That the Fish are marketing Nolasco, the only player on the roster making more than $3 million (a lot more, in fact, at $11.5 million) and a free agent at the end of this season, ranks as the least-surprising bit of baseball news since Yasiel Puig took over a game (update: He just did it again). Nolasco has actually produced a strong season so far, with a 3.68 ERA, 3.55 FIP, and 3-to-1 strikeout-to-walk rate, while making all of his scheduled starts. The market for durable, better-than-average starting pitchers who shouldn’t cost an arm and a leg figures to be brisk, which could actually end up netting the Marlins … well, maybe a few fingers and half a tibia, anyway.

There is no great urgency to move anyone else, given the sum total of Miami’s payroll commitments beyond this year: $1.5 million for Jeff Mathis in 2014, plus the $4 million the Marlins are paying Arizona so that they could be rid of Heath Bell. There are also few veterans worth buying on this team, with the possible exception of a no. 5 starter type like Kevin Slowey or a half-decent reliever like Steve Cishek or Mike Dunn. We’ve already had our fun rumor-mongering about at least one theoretical destination for Giancarlo Stanton. But realistically, the Marlins would find a more orderly process and more focused suitors if they marketed the big guy this winter, rather than trying to shoehorn him into a slapdash deal at the deadline. So other than Nolasco and maybe another arm or two … Juan Pierre, anyone?