Tony La Russa Is Going To Need Your Gun And Your Badge, Nyjer Morgan 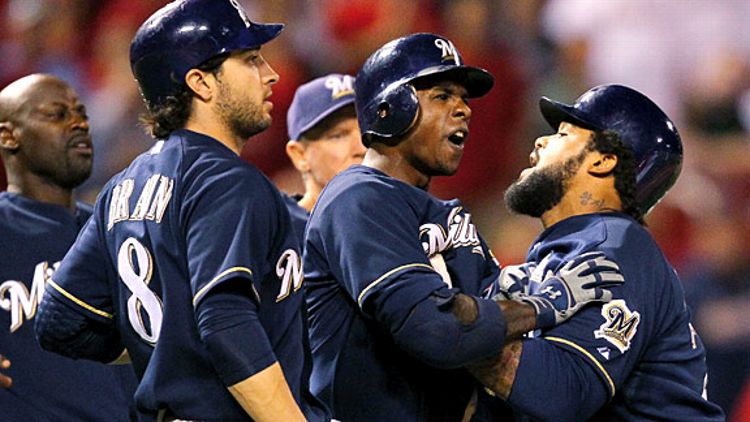 Wednesday night, the St. Louis Cardinals beat the Milwaukee Brewers, 2-0, putting the Cards 8 ½ games behind the Brewers in the NL Central. But the real story, as it usually is in games involving the SWAT Team, was Nyjer Morgan.

St. Louis starter Chris Carpenter struck Morgan out in the top of the ninth. Apparently, in one direction or another, words were exchanged between pitcher and batter, prompting Morgan to throw his delectable Big League Chew/Skoal glob in Carpenter’s direction. And in adherence to Marquess Of Queensberry Rules, the benches cleared, with Albert Pujols leaping the defense of his pitcher.

What Morgan did was gross and would probably get him thrown out of a White Castle, to say nothing of a baseball game. But what was really funny were the post-game reactions.

According to Morgan, he was miffed because Carpenter talked some trash following the strikeout, only to turn his back on the mutiple personas of the Brewers outfielder. This is a no-no. “It’s just one of those things, the competitiveness coming out in both teams. (Carpenter) was battling and I was battling. He felt he had to say something. If he feels he has to say something, let him say it. But as soon as he said it, he turns his back and runs away.”

Hey, guys, this is a safe space. Chris, how did all this make you feel? “Yesterday he screamed, a couple days ago when he hit that … Which I don’t mind. Do whatever you want. But when you strike out like that and try to throw the chew (at) the mound to our pitcher and yell? Come on, man. You need to be more professional than that.”

OK, OK! This is good! Sharing! I think pitchers are way too sensitive about being shown up, personally. Baseball is basically the only sport where there’s a code of ethics among players that dictates that you can’t get too happy about doing your job well. But we’ll let that slide.

Albert Pujols? How did all this sit with you? “I actually like that guy (Morgan). I don’t mind having a guy like that on my team. He brings a lot of energy to the ballclub, and you want to have a guy like that. But sometimes I think he goes (a little overboard) and tries to put too much energy.”

Great! See, Nyjer, this is not a condemnation of you. You matter. But sometimes there can be too much you. We’re growing here. It’s worth mentioning that Morgan went on to call Pujols a girl in @TheRealTPlush Twitter tirade. But let’s table that for a sec and keep it moving.

As we all know, a post-game “he-said, he-said” would not be complete with out the tinfoil hat, blacked-out windows ranting of Cardinals chessmaster Tony La Russa. Take it away, TL: “(Morgan) is having a good year for them, he’s a talented guy, but he’s close to the edge as far as creating problems and trouble. It takes away from the player that he’s been for them or wherever he’s been with his fuse being so short and actually looking for things to instigate. So I hope he gets a clue.”

Cheese and crackers, this guy. Let me get a little “One Man’s Opinion” here. This is why sports fans are punching each other in the face at bars to get a better look at an NFL preseason game or a random college football game or YouTube videos of Kevin Durant playing pickup rather than watch a pennant race (OK, pennant trot; the Cards are not making up 8 ½ games) MLB game. Because baseball’s idea of personality and charisma is limited to the slight variations of chin beards to be found among its pitchers.

Why is La Russa talking about Morgan as if he’s Mel Gibson in Lethal Weapon? Seriously? “Close to the edge?” You’re a good cop! But you’re dangerous!

There’s a reason Morgan was on the cover of Sports Illustrated. He’s exciting, he’s interesting, he’s different. He doesn’t have a chin beard.

Yes, baseball has an image problem. It’s image problem is that every time somebody hits a baseball more than 200 feet, fans wonder what kind of cocktail he is taking. A guy who has an alter ego and plays every game like it’s his last day on Earth is not dangerous. He’s the best thing to happen in what has been a largely forgettable baseball season.