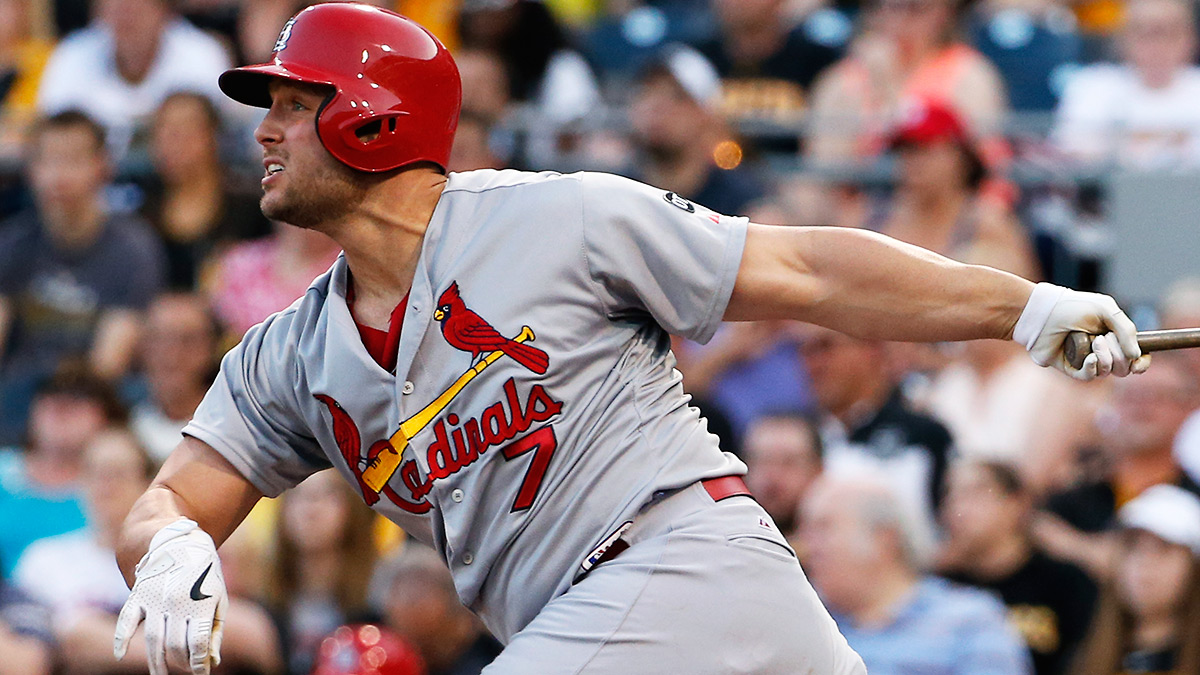 In the early months of the season, our attention gravitates toward teams and players who are doing something different. In April, I wrote about Masahiro Tanaka’s attempt to thrive with lower velocity and about the new way the Tigers were winning. This month, I’ve covered Bryce Harper’s improved patience, Mike Moustakas’s opposite-field epiphany, the Astros’ unfamiliar excellence, and, most recently, Shelby Miller’s expanded pitch selection. This is the way our observational skills work: We’re wired to snap to attention when we see something new, and to tune out when a performance is repeated.

The downside of our fixation on the new is a tendency to take for granted the players who have stayed at an elite level — players like Cardinals left fielder Matt Holliday, the rare $100 million free agent who’s still productive toward the end of his deal. Holliday, now 35, is a sunny sky in San Diego, a pleasant scent we can’t smell because it has surrounded us for so long. He’s hit for so many years that a slump would be bigger news than a hot streak. Fortunately for St. Louis, he hasn’t hit a skid.

Holliday is hitting .317/.433/.441 this season, more than 40 percent better than a league-average hitter, after adjusting for ballpark.1 That makes him the 26th-best hitter in baseball at the moment. He’s hit better than Dee Gordon, Devon Travis, Kris Bryant, and Moustakas, and almost as well as Eric Hosmer. I picked those five players because they’ve all gotten Grantland posts this spring: They’re new, improved, and exciting. Holliday is the lifer at the top of the leaderboard, still mashing but no longer a novelty. A player who makes a mechanical change that seems to take, at least temporarily — for instance, Anthony Gose, who’s hit almost as well as Holliday — is a comet, a striking sight we try to appreciate before it passes. Holliday is more of a metronome.

With almost 200 plate appearances in 2015, Holliday is more than a third of the way to a 10th consecutive season of qualifying for the batting title while delivering a park-adjusted offensive line at least 30 percent better than league average. Since World War II, only 13 other hitters have managed such a streak. Six of them are Hall of Famers: Stan Musial, Mickey Mantle, Willie Mays, Hank Aaron, Frank Robinson, and Reggie Jackson. Two more are on the verge of induction: Mike Piazza and Jeff Bagwell. Another two will be elected when eligible: Jim Thome and Albert Pujols. And the final three would be shoo-ins or strong candidates if not for their ties to PEDs: Manny Ramirez, Gary Sheffield, and Alex Rodriguez. That group of 13 hitters includes more than a third of the 500 Home Run Club, and its least prolific power hitter, Piazza, went deep 427 times.

Although Joe Morgan might argue otherwise, consistency isn’t the sole quality one wants in a hitter. Barry Bonds was the best hitter in baseball, but he’s missing from this list: Even if we credited him for the 1994 strike year, he’d top out at nine consecutive qualifying seasons, thanks to the elbow surgery that cost him two months in 1999. Obviously, even before he bulked up, Bonds was a better hitter than Holliday, and Holliday doesn’t get extra credit because his string of qualifying seasons came without a down year to break up the bunch. Still, he’s on an impressive run, one fueled by a tough-to-sustain combination of production, durability, and bad-bounce avoidance. Holliday hasn’t had a DL stint that kept him out more than the minimum number of days since 2005, when he fractured a finger sliding. If we round to the closest whole number, he’s been worth at least four Wins Above Replacement2 in every season since 2006.

If I were writing about Adrian Beltre or Carlos Beltran, this is the part of the post where I’d make the case for Cooperstown, comparing the active player’s peak and career WAR totals to those of the players at the same position who earned plaques. That argument doesn’t work as well with Holliday, who’s only nine months younger than Beltre but made the majors six seasons later. As a left fielder, Holliday has a higher baseline to clear at the plate, and unlike Beltre and Beltran, he doesn’t help his teams when he isn’t hitting. He’s been, at best, an average fielder compared to his peers at a position reserved for guys with bad gloves (and Alex Gordon), and he’s been an unremarkable baserunner, save for one year when he was among the league leaders. And unlike the legends I name-checked above, Holliday’s counting stats don’t pop off the page. The black ink on his Baseball-Reference card is almost entirely confined to one season, his Coors-aided 2007, when he won the NL batting title and led the majors in total bases. Since then, the only thing he’s led the league in is grounding into double plays. He’s never finished in the top three in NL WAR, though the Rockies’ return to the playoffs in ’07 earned him a second-place MVP finish.

Holliday’s lack of flashy baseball-card stats since then may have made him underrated, but his reputation always lagged behind his potential. As a young player, Holliday was neither a top-100 prospect nor a statistical standout. His profile in Baseball Prospectus 2004 predicted that he’d soon be “booted from the 40-man roster,” noting that “outfield corners who can’t slug .400 should get to be non-prospects pretty quickly.” He exceeded those expectations immediately, but even after a few years of raking at Coors, he hadn’t convinced his doubters: After the Rockies traded Holliday to Oakland in November 2008, BP wrote, “If anyone thinks Matt Holliday is going to be able to repeat this kind of production while moving from Colorado to Oakland, they’ve got another thing coming.” In 2008, Holliday had finished 41 percent above league average. In 2009, splitting the season between Oakland and St. Louis, he finished … 41 percent above league average. Leaving Coors Field took a small cut of his counting stats, but it didn’t hurt his value.

Outwardly, Holliday might be the model of consistency, but lately he’s evolved (or devolved) in some subtle ways. Despite a line that looks as beefy as his forearms, Holliday has hit only three homers, and his Isolated Power (slugging percentage minus batting average) has fallen by 45 points. He’s pulling the ball, and hitting it hard, less often than he has in the past, and he’s hitting fewer fly balls. Only 9.4 percent of Holliday’s pulled balls this season have been flies, down from a 19.1 percent career rate and a 22.5 percent mark last season, and his power on those pulled flies is at an all-time low, a continuation of a multiseason trend. Of 230 players with at least 10 fly balls tracked by Statcast through Sunday, Holliday’s average distance of 286.7 feet ranked seventh-lowest, according to Baseball Savant. These seem like the signs of a slowing bat.

If Holliday’s physical skills have begun to deteriorate, though, he’s found a way to delay the inevitable decline in results. His swing rate hasn’t changed: He’s offered at 49.2 percent of the pitches he’s seen, almost identical to last season. But the distribution of those swings has changed considerably: Holliday is leading the majors by swinging at 79.3 percent of pitches inside the strike zone, well above the 63.7 percent league average. On pitches outside the strike zone, he’s swung only 26.3 percent of the time, below the 30.2 percent league average. Holliday has been more aggressive inside the strike zone and more selective outside the strike zone than he has in any previous season for which we have PITCHf/x data, and no other player in 2015 has as wide a percentage-point gap between his swing rates inside and outside the zone.

So far this season, Holliday has mastered the art of selective aggression — the practice of swinging at hittable pitches and taking the ones that are difficult to drive. As a result, his walk rate has risen to a career-high 15.2 percent, and he has the fifth-highest on-base percentage among qualified hitters. One way or another, he’s reached base in 41 straight games, one short of Pujols’s franchise record.

Eventually, a slowing bat will trump increased selectivity. Holliday’s power could recover — he started slow in that respect last season, too. But if not, the erosion could come quickly, as his high BABIP falls and emboldened pitchers start to pound the strike zone. On the surface, Holliday looks the same, but he’s had to do things differently just to stay where he was. Every adjustment by an aging athlete is a rearguard action. But Holliday’s efforts to extend his decade of near dominance deeper into his thirties might become the most compelling act of his career.

The 30: Surveying the Power Brokers