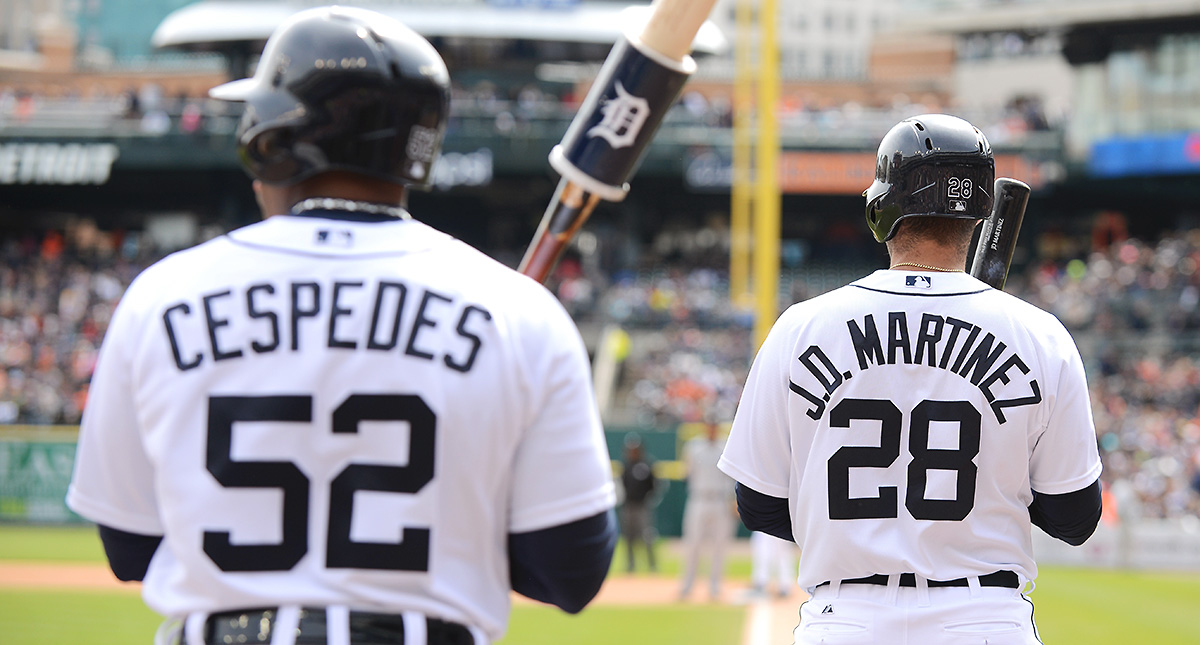 In the beginning, the baseball gods created the Nationals and the Dodgers, and the AL Central was without form. Aside from the NL East and NL West, where Washington and Los Angeles were clear favorites, no division had a projected winner as of Opening Day with better-than-even odds of finishing in first, according to FanGraphs’s Playoff Odds. The AL Central, which Jonah Keri’s season preview noted “could be the most competitive division in baseball,” was the only division in which no team was accorded even a 45 percent shot to win. Grantland’s six staff prognosticators were just as indecisive; altogether, the six of us anointed three different division champions.

Today’s Central forecast looks a lot clearer. The Tigers, who began the season with a second-place projection from FanGraphs, are off to an 11-2 start, giving them baseball’s best winning percentage. The Royals have also outplayed expectations, going 10-3. But the Indians, the Opening Day favorites, and the White Sox, a popular sleeper pick, are a combined 9-15. Two weeks of action can’t completely rewrite the projected denouement of a six-month regular season, but because the Tigers and Indians were evenly matched at the start, their coinciding hot streak and slump — both of which were fueled in part by Detroit’s series sweep in Cleveland last week — have produced baseball’s biggest swing in playoff probability. The table below shows the teams whose odds of winning their division have increased or decreased the most since Opening Day, and the Tigers are at the top:

The Tigers’ odds of taking a title have increased by more than twice as much as the Cardinals’ and nearly three times as much as the Mets’, who are off to the strongest start outside the Central, but who also have a couple of handicaps in their division that Detroit doesn’t: They have to overcome the Nats (who are scary despite their scuffles so far), and they have to do it (for now) without David Wright, Travis d’Arnaud, and Jerry Blevins, all of whom have suffered post–Opening Day injuries of varying severity. For all the progress the Mets have made, they’re still much more likely to win a wild-card spot than they are to upset the predicted order in the NL East. The Tigers, however, have transformed themselves from slight division underdogs into a team that’s roughly 4.5 times more likely to win the Central than their closest competitors. The Tigers’ 66.6 percent division-championship probability is the third-highest in baseball, and because they’ve improved their odds of bypassing the wild-card game and its (approximately) 50-50 odds of elimination, they’re now the fourth-most-likely team to win the World Series. In two weeks, the Central has gone from the division with the foggiest future to the one with the strongest division favorite outside of the NL’s top two.1

At this point in the season, we haven’t seen enough of any team to significantly adjust our understanding of its true talent, injuries aside. While FanGraphs’s playoff odds show noticeable bumps and dips, the site’s projected rest-of-season winning percentages have barely budged. The Tigers are projected to win at a .533 pace from now through September, up from .526 before their first game. The Indians are down to .523, from a starting point of .529. Over a 162-game season, those changes would be worth very little: about two net wins.

To this point, though, the Tigers have been an .846 team, and the Indians have been a .333 team. Those bursts of good and bad play don’t tell us much about what the two teams will do after today, but they do tell us something about where they’ll finish the season. By banking 11 nonrefundable wins in two weeks, the Tigers have increased their projected end-of-year win total by almost half that many W’s.

Like any team that goes 11-2 over a 13-game stretch, the Tigers have enjoyed more than their share of unsustainable performances. They’re tied with the Royals for the MLB lead in run differential, so it’s not as if they’ve run up their record by eking out a string of one-run wins. Still, the sources of some of those runs are suspect. Tigers batters have the highest BABIP in baseball, and Tigers pitchers have allowed the third-lowest, even though the Statcast batted-ball data we have doesn’t suggest the team has either hit the ball especially hard or allowed particularly weak contact. Shortstop Jose Iglesias is batting .439; we’ve been through Iglesias BABIP theater before, so we can guess how Act 2 will end. Outfielder Anthony Gose is slugging .643; mechanical changes make the power slightly more plausible, but he hasn’t addressed his problems with plate discipline.

On the pitching side, Shane Greene is the small-sample hero, with two runs (one earned) allowed in three starts. Greene gets grounders and throws strikes — his percentage of pitches in the strike zone ranks among the league leaders — but he’s struck out only 11 batters in 23 innings, so it would be smart to resist getting super excited. In his most recent start, Greene had four double plays turned behind him, the most the Tigers had recorded in a game since 2013. While Detroit’s new defense is more likely to turn DPs (pity Rick Porcello), that’s still an example of fortuitous timing. I could name more Tigers who’ve outpitched their peripherals, but it’s probably sufficient to say that the staff ERA is 2.48. Offense is down in baseball, but not by that much.

Although there’s nothing unusual about Detroit being in first place, there is something atypical about the path these Tigers have taken to get there. We’re used to seeing the Tigers win with one model, but lately they’ve turned into a different team. Here are the Tigers’ cumulative totals and MLB ranks over the past four seasons in five statistical categories in which (to put it delicately) they didn’t excel: stolen bases, Base Running, Defensive Runs Saved (DRS), Park-Adjusted Defensive Efficiency (PADE), and Skill-Interactive ERA (SIERA), a park-adjusted estimate of a pitcher’s underlying skill.

Those Tigers teams were terrible at baserunning, eye-averting in the field, and consistently bad in the bullpen. Their failings ate away at their win totals: Given their array of Cy Young Award winners and MVPs, it always seemed as though the Tigers should be blowing teams away, but after 2011, they barely beat out mediocre competition, winning their last three division titles by three games, one game, and one game, respectively. Even so, they won more regular-season games than any other team (366) from 2011 to 2014, because GM Dave Dombrowski assembled the best lineup and best starting rotation in baseball.

What the trenches were to warfare, the Tigers were to teams: Slow, inelegant, and bloody, they won by brute force and attrition. Each of the Tigers’ strengths ameliorated one of their weaknesses. Over that four-season stretch, the Tigers converted 1.5 percent fewer balls in play into outs than the average team.2 That’s bad. But thanks to their pitching staff’s top-tier strikeout rate, they also allowed 1.7 percent fewer balls in play, which reduced the cost of having a porous defense. They were almost 20 runs deeper into the red than the next-worst baserunning team, but they also led the majors in on-base percentage, which allowed them to replace fallen runners with fresh ones and push players across despite going station to station. Only the Red Sox, with the aid of a better hitter’s park, scored more runs than the Tigers from 2011 to 2014, another reminder that clogging the bases works.

The 2015 Tigers have won in a more well-rounded way. Detroit still has hitters: Miguel Cabrera is a monster, J.D. Martinez was no mirage, and Yoenis Cespedes often hits baseballs hard. Now, however, not all of the team’s hitters start subtracting runs as soon as they leave the batter’s box. The Tigers rank second in DRS and fourth in PADE, thanks to Iglesias, the Gose–Rajai Davis center-field timeshare, Cespedes, and the fact that Nick Castellanos hasn’t yet racked up a deficit as he did last year. They’re tied for fourth in stolen bases and are above average in Baserunning Runs. And after two consecutive seasons with one of the three or four oldest lineups in the majors, Tigers batters are collectively of league-average age. Iglesias, Gose, and Castellanos give Detroit three regulars 25 or younger (with two more in backups James McCann and Hernan Perez), and only a third of the lineup is over 30.

Not every characteristic of the new-look Tigers is encouraging, though. Their rotation and bullpen rank 13th and 17th, respectively, in SIERA, and if those rates hold steady, their dead-bullpen bounce from bad to middling won’t quite counteract the rotation’s sinking strikeout rate. The Tigers’ staff ranks 20th in fastball velocity. Maybe Justin Verlander and Bruce Rondon will return in time to raise that number, but if not, it will mark the first time the Tigers’ team velocity has fallen below the league median in the PITCHf/x era.

The Tigers also haven’t banished every concern about the seasons that await them beyond this year. The same knee that sidelined 36-year-old Victor Martinez this spring is bothering him again. Verlander doesn’t have a comeback timetable from his triceps strain. The Tigers have a fortune committed to players like Cabrera, who aren’t on the happy part of the aging curve. And although there’s plenty of youth on the roster, it’s not clear that the twentysomethings can replace the production of the elite thirtysomethings who are aging further from their primes. But those are fears for the future; the 11-2 record is today. If this is the core’s last ride, the Tigers’ hot start has made them much more likely to get one more real crack at a ring.