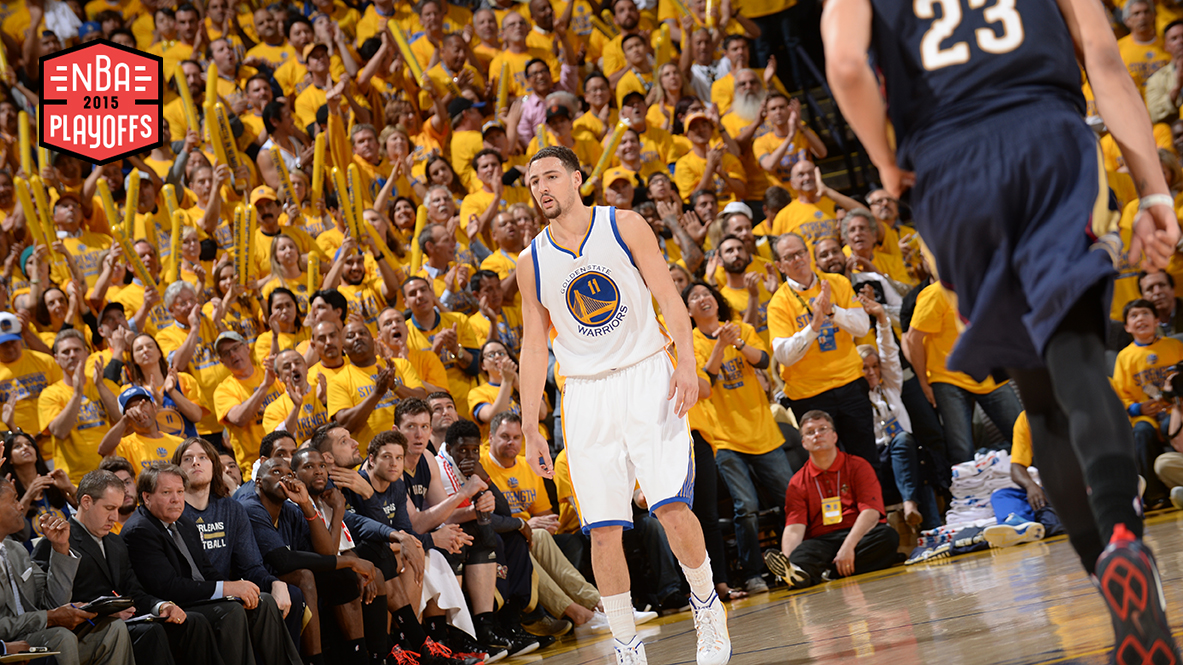 On Monday night in Oakland, the Warriors beat the Pelicans to take a 2-0 lead in their first-round playoff series. This was the first real test of the seemingly unstoppable Warriors home juggernaut. Eric Gordon nailed a 26-foot 3-pointer, cutting the Warriors’ lead to one, with 6:16 left in the fourth quarter. That’s when Klay Thompson went to work. On the ensuing possession, he came off of an Andre Iguodala screen and coldly knocked down a tough catch-and-shoot jumper.

Shortly after that, he dished the ball to Draymond Green for a bucket. On the next Dubs possession, he came off of a curl and drained another elbow jumper. It was suddenly a six-point game, and he wasn’t done. Two minutes later, he would ice the contest with an and-1.

When the Warriors needed to wrestle the game back from the Pelicans, Thompson scored or assisted on every bucket. He ended up with 26 points on just 17 shots, playing big in the game’s biggest moments, scoring 14 huge points in the fourth. Anthony Davis and Steph Curry were on the floor, but Klay was the most valuable player last night.

We think of 2014-15 as Thompson’s breakout season, but until one night in January, he was arguably the Art Garfunkel of the NBA: the ultimate “other guy” in the league’s best backcourt. Then he logged what might be the single most insane 12-minute scoring surge in NBA history. It was a performance so breathtaking that it forced the media to abandon the Splash Brothers frame and, for once, take a look at Thompson as an individual threat. 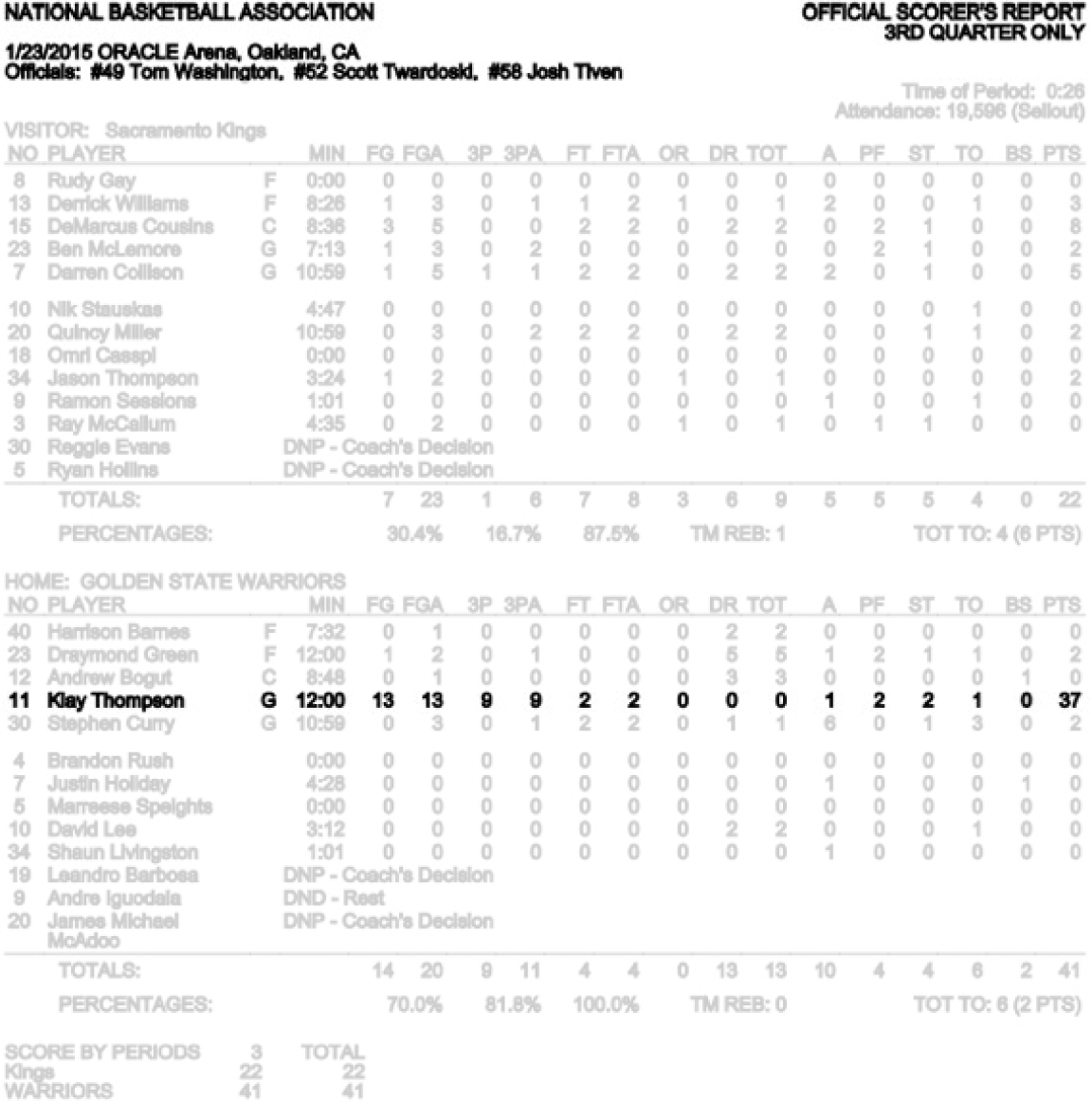 The official scorer’s report from that magical quarter at Oracle has become a collector’s item within the Warriors organization: 13-for-13 from the floor, 9 3-pointers, 37 points, 12 minutes. Insanity. 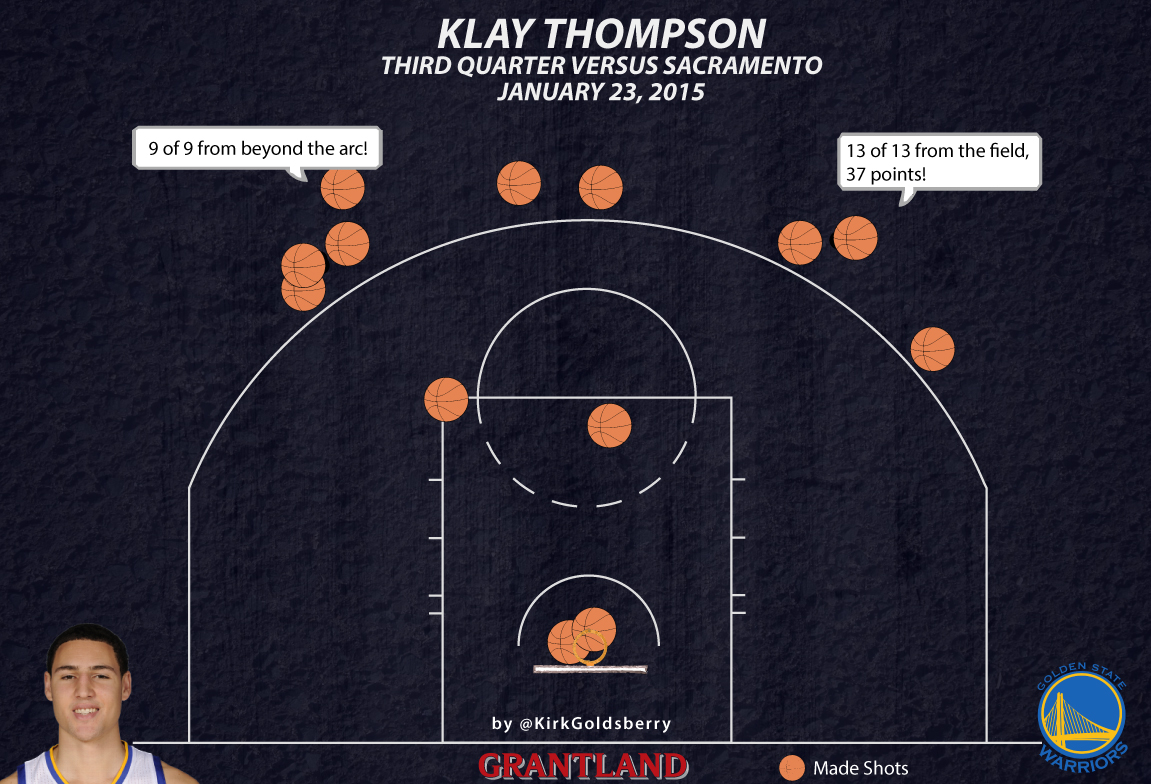 It was like Thompson had found a secret cheat code for NBA Jam, except it was real life. Everything he put up found the bottom of the net.

I caught up with Thompson a few weeks ago at the Warriors’ team hotel in Dallas, less than 24 hours after his team beat the Suns with a buzzer-beater back in Oakland.

Thompson said his path to jump-shooting greatness began as a teenager in Orange County. “I started to realize I could really shoot my sophomore year in high school,” he said. His jumper began to take shape under the tutelage of one of the most respected youth coaches in Southern California, Joedy Gardner.1 Thompson played on some of Gardner’s AAU teams and attended twice-weekly workouts with him in Mission Viejo.

Gardner also had the respect of Klay’s father, former pro Mychal Thompson, who called him “one of the best shooting coaches in the entire country” back in 2009.

“There was one drill that stands out,” Klay Thompson said. “He’d have me shoot through a Hula-Hoop to help me get my balance right, make sure that I wouldn’t have too much going forward, backward, or sideways.” The Hula-Hoops worked; Thompson has arguably the prettiest catch-and-shoot form of any player in the league.

He was generally unheralded coming out of high school, but Thompson enjoyed a nice three-year run at Washington State before entering the 2011 draft. This old scouting report from Draft Express seems spot-on four years later:

Relying heavily on his perimeter shot … Thompson is constantly moving without the ball and coming around screens, showing a great knack for finding open areas of the floor and being multi-capable once the ball gets in his hands. Making quick decisions and showing good scoring instincts, Thompson doesn’t usually have the ball for that long before it leaves his hands. 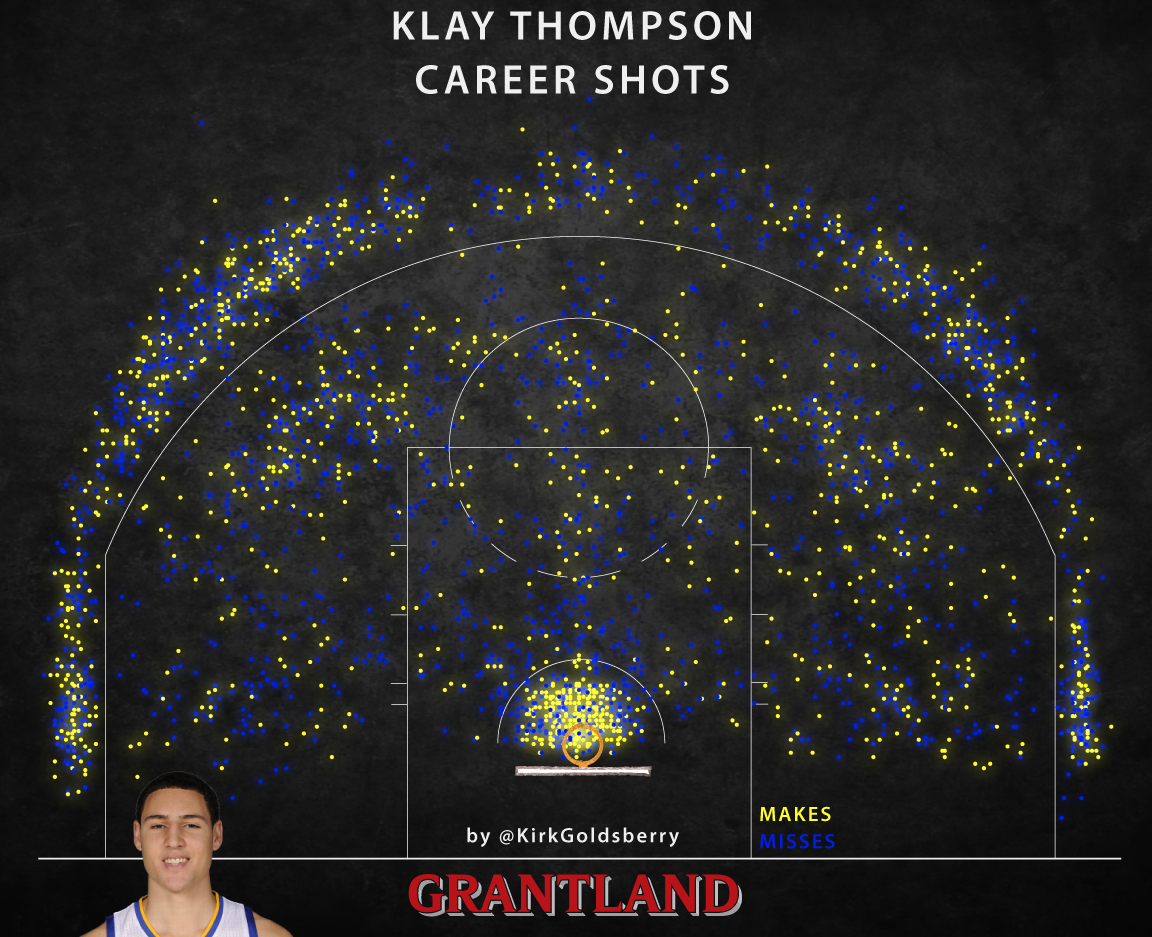 Thompson has applied those skills brilliantly as a pro, launching more than 4,000 shots in his career and making more than 40 percent of his 3s each year. But that success is more impressive when you also consider that he has elevated his shooting volume every season too. His rookie year, Thompson attempted 4.1 3-pointers per game; this season, that number climbed to 7.1. Only two other players in the league attempted more per game from long range; one of those just happens to be his backcourt mate.

That’s the scariest thing about the Splash Brothers — it’s not just their efficiency, but the way they combine that efficiency with volume. Out of the five players in the league who attempted more than 500 3s this year, Curry and Thompson were the only two who converted more than 40 percent of those shots. Any NBA team would be thrilled to suit up even one of these guys.

The Splash Brothers are not identical twins. The contrast in their games is one of the coolest things about them. As a point guard and ballhandling savant, Curry creates unassisted 3s better than anyone in the NBA. On the whole, 84 percent of NBA 3s involved an assist this season, but only 58 percent of Curry’s 3s were assisted. Thompson, on the other hand, is a pure catch-and-shoot guy — 91 percent of his made 3s were assisted this season. Unlike Curry’s triples, Thompson’s long-range buckets almost always punctuate those gorgeous ball-movement sequences that have become common in Oakland.

If Curry gives the Warriors the best perimeter-scoring ball handler in the playoffs, Thompson provides them with one of the league’s finest off-the-ball threats. And if there’s one thing that Steve Kerr has improved in his first season as the team’s coach, it’s tactical movement. Perhaps no player has benefited more from Kerr’s arrival than Thompson. “I move side to side across the court a lot more,” he said, “instead of just standing in the corner, being an outlet.”

Thompson isn’t the only one cutting more. At any given time, all five of the team’s players are moving. “I think our fluidity is so great this year,” said Thompson. “All three of our perimeter players and our two post guys who handle the ball are in constant movement.”

As a catch-and-shoot specialist, Thompson’s opportunities depend on his teammates and the offense. His impressive shot chart from this season is a celebration of both his dead-eye shooting and the overall functionality of the Golden State offense. 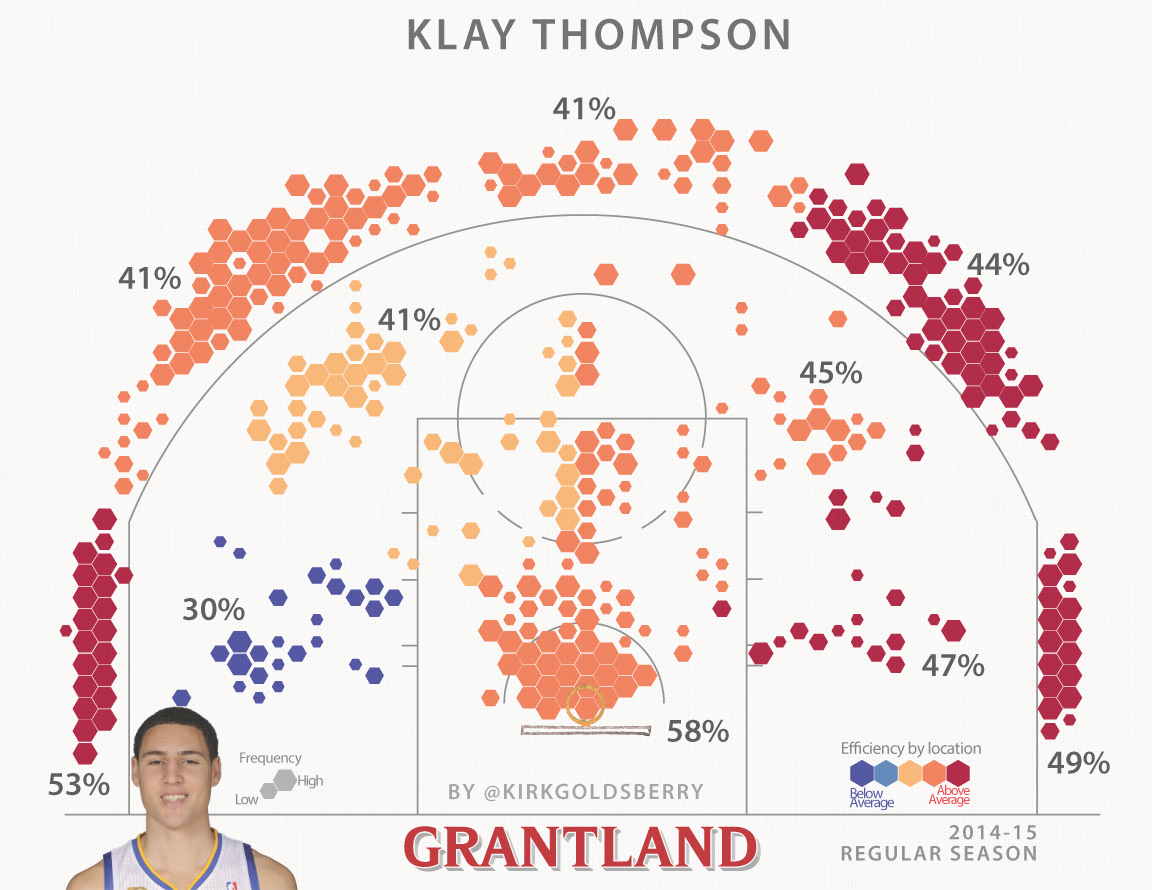 Thompson is willing and able to shoot from anywhere, but his accuracy from the corners is particularly great. This season, 36 NBA players attempted at least 100 corner 3s. Thompson ranked third in shooting efficiency in this group, hitting a whopping 51 percent of those shots, behind only Kyle Korver and Anthony Morrow. Thompson made 65 corner 3s during the regular season, and all 65 were assisted.

In a way, Thompson’s rise this season is perfectly microcosmic of his team’s rise. It’s not that the Warriors were bad last year, it’s that they had an offensive breakout this year. “We’re getting better shots. We’re not settling for isolation or one-on-one. We got so many talented guys on this team that can shoot, handle the ball, and pass, and if something’s not there in one or two dribbles, we’ll just move the ball on and make the simple play,” he said.

Less than a year after many NBA observers viewed Thompson as trade bait that could turn into Kevin Love, the Bay Area is now very thankful that swap never materialized. Thompson is no longer just “the other guy.” He’s become a cornerstone player on the best team in the league. Just ask the Pelicans — if any of them can manage to hear you, that is.