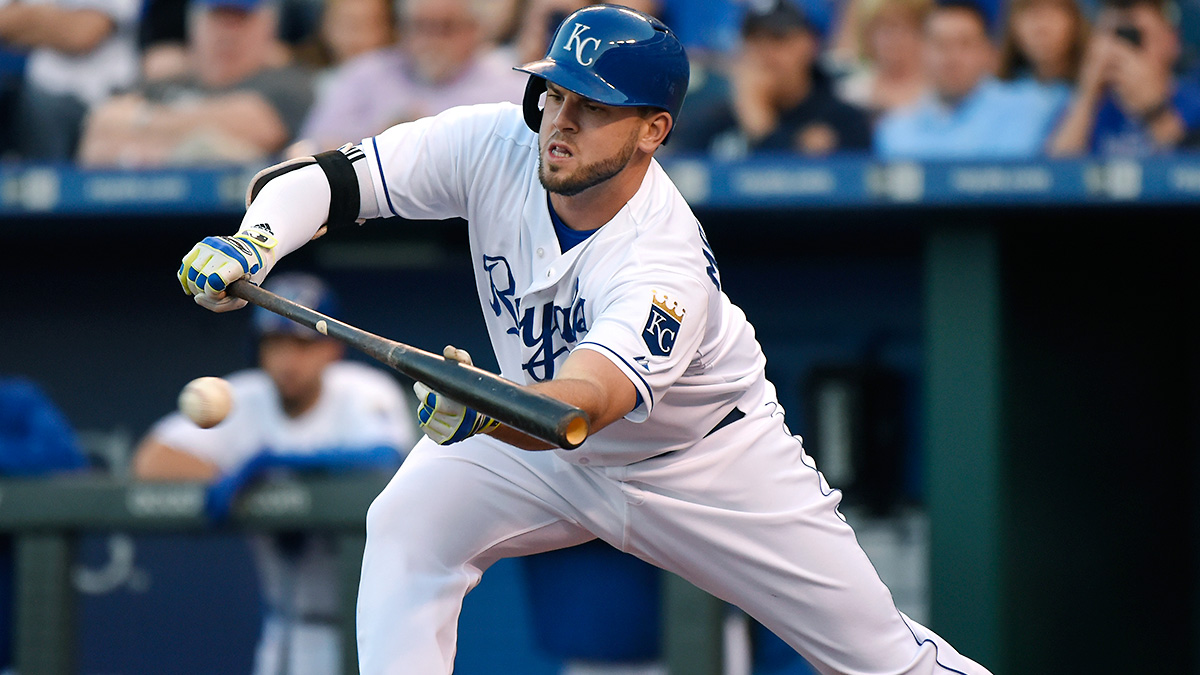 If you’re trying to ID a hitter and you can’t do a DNA test or a retinal scan, ask to see his spray chart. Pull hitters reveal themselves very quickly: A hitter’s pull percentage “stabilizes,” or becomes a close approximation of his actual abilities, after about 30 balls in play. With no prior knowledge or scouting skills, an observer with a pencil and a diagram of a diamond can get a sense of a player’s pull tendencies in roughly two weeks’ worth of games.

Major league teams use much more precise methods than pencil and paper, which allows them to profile opposing players even more quickly. The reliability of batted-ball distributions in small samples is one of the reasons that defensive shifts have caught on: According to Baseball Info Solutions, shift use is on pace for a 34 percent increase in 2015, after a 63 percent rise last season. And while some teams have been slow to adopt unorthodox defensive alignments, more and more have managed to overcome any resistance to trying something new. Based on published reports and my own conversations with team personnel, it appears that the key for front offices has been persuading pitchers and coaches that the importance of “pitching to the shift” is mostly a myth, as is the corresponding belief that the shift won’t work if pitchers don’t precisely hit their spots.

Here’s a quick-and-dirty debunking. Using ESPN’s TruMedia tool, I compiled a list of the top 50 hitters by ground ball pull percentage from 2009 to 2015, a group that includes frequent shift victims like Ryan Howard, Mark Teixeira, and Carlos Santana. Then I compared their pull rates on grounders, broken down by horizontal pitch location. The conclusion: With hard-core pull hitters at the plate, pitch location doesn’t make much of an impact on grounder direction.

A pronounced pull hitter remains a pull hitter wherever he’s pitched. Although the highest rate of pulled grounders results from pitches on the inner third and inside, the pull rate on pitches over the middle is almost the same. Even on pitches in the outer third of the zone and outside, extreme pull hitters still pull their grounders much more often than not — and more often than the average hitter pulls grounders on pitches over the middle. In other words, a good shift candidate is likely to play into a shifted defender’s hands even if the pitcher misses his intended target by the width of the plate. The Jack Custs and Lucas Dudas of the world just don’t go oppo that often, even when the situation seems to call for hitting the other way.

It’s notable, then, when a pull hitter changes his game, and even more notable when he does so and still has success. Which brings us to this season’s patron saint of adaptable pull hitters: Royals third baseman Mike Moustakas.

Moustakas’s opposite-field renaissance was supposed to start last season. Chastened by his poor offensive performance in 2013, the left-handed hitter spent the following winter “stamping out the dead-pull in his swing.” In February and March of 2014, he regaled reporters with tales of his offseason transformation and revamped approach. That work took on added importance in the season’s first series, when the Tigers overshifted against him. “If that’s what they’re going to do, I’m going to get my hits to the left side of the field,” Moustakas said. “If you drop down a bunt, start hitting a ball over at the shortstop, they’re not going to be able to do that anymore.”

But he didn’t do any of those things. Moustakas pulled the ball more often in 2014 than he had in 2013. According to Inside Edge, he didn’t attempt a bunt against the shift until ALDS Game 2, when he dropped one down and singled against the Angels. And his overall numbers were as bad as they’d been a season before.

So this spring, the stories started again. “It’s on me to figure out a way to beat [the shift], maybe lay down a couple of bunts, go the other way a little more,” Moustakas said. This time, though, he backed up his words with action, at least in exhibition games: As Jeff Sullivan noticed, Moustakas’s rate of balls hit to the left side of second was more than double his rates from the three previous springs.

That progress has carried over into the regular season. Here’s a look at Moustakas’s batted-ball distributions from 2014 and 2015, via FanGraphs’ interactive spray chart tool.

Moustakas pulled 50.1 percent of the balls he put in play last season, the 16th-highest rate of 209 hitters who made at least 400 plate appearances. This year, he’s pulled only 34.4 percent of his batted balls, which ranks 158th out of 190 hitters with at least 75 PA. Only Ian Kinsler, whose makeover I covered last month, has lowered his pull percentage more than Moustakas. And while Kinsler’s new look hasn’t seemed to help him so far, Moustakas’s journey between opposite ends of the pull-percentage leaderboard has coincided with a massive offensive improvement, from a .212/.271/.361 line last season to .324/.384/.471 today. Only the oddly intimidating Zack Cozart and high-BABIP hero DJ LeMahieu have improved their production by as much compared to 2014.1

From 2012 to 2014, Moustakas was one of the worst opposite-field hitters in baseball. It wasn’t just that he didn’t go the other way often; it was that when he did, the Royals almost always regretted it. When he put a pitch in play toward left field over that three-season span, Moustakas slugged .223. Of 380 qualified hitters, Moustakas’s opposite-field slugging percentage ranked 375th — lower than Brendan Ryan’s, lower than Sam Fuld’s, and almost as low as Vernon Wells’s. This year, Moustakas is slugging .611 on opposite-field batted balls — 36th-highest out of 178 hitters. The solo homer he hit to left in the Royals’ home opener — the first one he’d ever hit out left of center — wasn’t a mirage.

In addition to driving the ball the other way, Moustakas has also paid attention to his short game. Although line drives and fly balls account for the bulk of the difference in his pull rate, Moustakas has also made an obvious effort to punish teams for playing him to pull on the ground. The lefty showed an increased willingness to bunt in spring training, including this beauty against the ever-shifting Astros on April 3:

He has since picked up two more bunt singles, on April 15 and April 30, as well as two other sac bunts.

Finally, he’s sneaked a few swinging grounders through the left side. The first of these came in the same exhibition game against the Astros; the next three actually counted.

Bunting against the shift and slapping the ball the other way has two purposes: in the short term, getting on base, and in the long term, convincing the defense to ease up on the shift, which should lead to more hits to the pull side. Last season, Moustakas was shifted against in 290 of 410 plate appearances in which the defensive alignment was visible — 70.7 percent. This year, he’s been shifted against in 59 of 99 — 59.6 percent — even though the league’s overall shift rate is up. This early in the season, that decrease could be a function of the teams he’s faced. But there’s pretty compelling evidence that the change is at least partially a response to Moustakas’s actions.

Exhibits A, B, and C: the Twins’ alignments on the left side of the infield immediately before and after Moustakas’s bunt against them above. Mouse over the GIF to see still images of third baseman Trevor Plouffe’s positioning in the moments after the bunt; in the moments after Moustakas’s batted ball in his next at-bat, which went for a single; and in the first inning the following day.

Before the bunt single, Plouffe is playing back, about halfway between second and third and the infield and outfield grass. After the bunt, he creeps in toward the plate and moves slightly toward third, and Moustakas gets another single — this time, one that Plouffe probably would have had if he’d been standing in the same spot he had been before the bunt. And the next day, the Twins have two infielders to the left side of second, which they’ve stuck with since.

Something similar happened against the Indians late last month. On the 27th, Moustakas went 4-for-5 against Cleveland with four balls hit toward left field. On the first-inning single and third-inning double, you can see — as the balls pass over their heads — that Cleveland’s infielders are shifting.

The next day: no shift.

Moustakas actually had a higher batting average on grounders and short liners when the shift was on last season, .179 to .135, but it’s hard to assess the shift’s holistic effect on his line: Defense, to some extent, is psychological warfare, and seeing all of those infielders arrayed on the right side might have made Moustakas more set in his ways. Whatever snapped him out of it has, for the first time in the majors, made him look like the highly rated prospect he once was.

Moustakas leads the majors with 17 opposite-field hits. He had 18 all of last year. And he’s done this despite pitchers responding to his new approach by busting him in. Last season, 27.8 percent of the pitches Moustakas saw were over the inner third or inside; this year, 40.6 percent have been, the fifth-highest rate among qualified hitters. It’s hard for a pull hitter to switch course mid-career, but Moustakas has made it happen. He won’t be a .320 hitter all season, but as long as he doesn’t become complacent and backslide into his old ways, he won’t be in any danger of making another return to Triple-A.

However, not every hitter who aims for the opposite field should expect his own Moustakas magic. The table below shows the qualified hitters whose pull percentage (on all batted balls) has declined the most compared to last season, with Moustakas in second. The “Avg. Exit Speed” column shows the average speeds of the balls in play recorded by the Statcast system,2 with the numbers in parentheses representing their ranks among the 213 hitters who’ve put at least 30 recorded balls in play this season. At least some of these evolutions, like Moustakas’s, are purposeful: Ike Davis, for instance, has so devoted himself to beating the shift that he now has the lowest pull percentage in baseball (25.4 percent).

All of these hitters have grown less pull-oriented, but Moustakas is the only one of the 10 who’s been notably better than he was last season. And while we don’t have Statcast data for 2014, we can say that this season, at least, most of these batters haven’t hit the ball particularly hard.

Laying down bunts and going the other way isn’t the only viable response to the shift: Teixeira, for one, has bounced back this year by chasing less often and hitting more fly balls, even though he still has one of the game’s highest pull rates. Teixeira’s increased walk rate, decreased K rate, and nine home runs have made him almost as productive as Moustakas, despite his .202 average. But if you’re sick of seeing hitters pass up opportunities for easy bunt singles to instead send grounder after grounder into the thick of the shift, Moustakas is the counterexample. Unlike the rest of the league, he isn’t content to let the defense beat him.

The statistics in this article reflect results through Sunday’s games.

‘The Grantland NFL Podcast’: Breaking Down the Draft Picks in the NFC