The Goodness of Albert Pujols Being Good Again 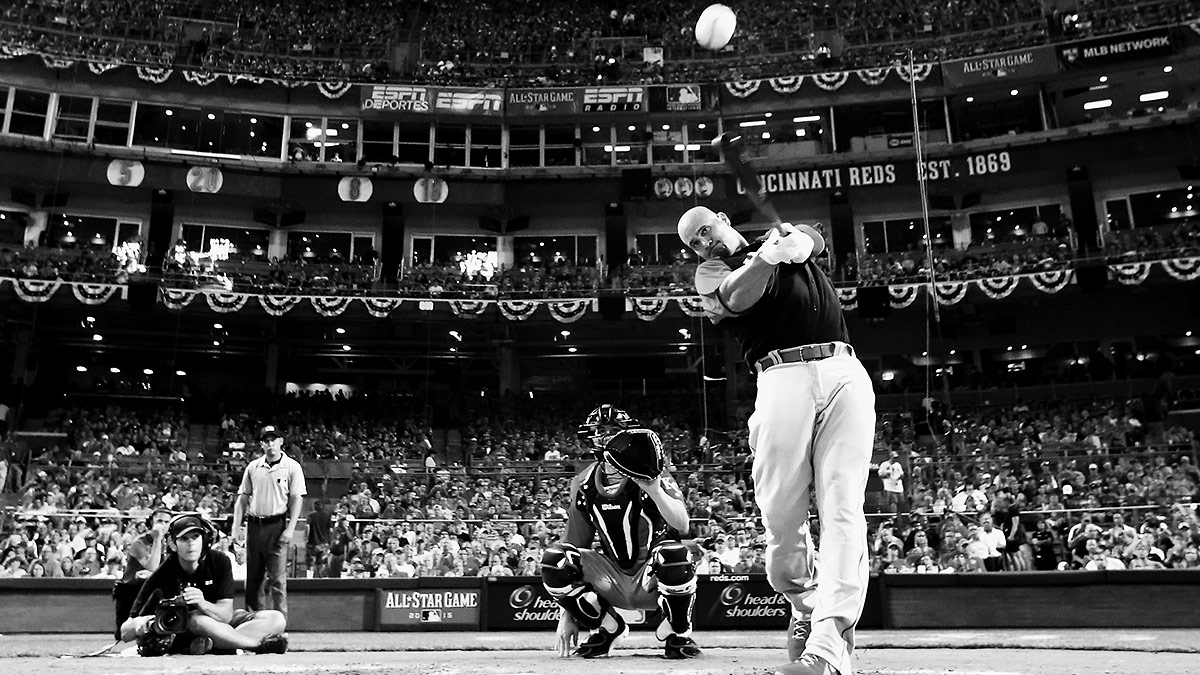 It was great to see Albert Pujols in the Home Run Derby. Pujols hit 21 home runs, hugged Joc Pederson’s brother, and kept pace with the game’s next generation of stars, all while bathed in a flop sweat that cascaded down his gloriously bald head like the icing on a cinnamon bun.

But most of all, it was great to see Pujols in the derby as its no. 1 seed, the man who’d hit more home runs than anyone else in the American League at the time, and who’s leading all of baseball a week later, with 29.

It reminded me of Ken Griffey Jr., in the 2007 All-Star Game. I remember reading a column — the source and author of which I’ve unfortunately forgotten — in the lead-up to that game about how it was important that Griffey, then hitting .286/.390/.568 at age 37, was starting. Not to give the old man a proper send-off, but because after a tortured, injury-riddled time in Cincinnati, he was playing well again, and fans who were too young to remember him at his best could get a glimpse of what all the fuss had been about.

That stuck with me. I was in college then, but I’d started watching baseball at a point when the game’s defining characteristic was that Ken Griffey Jr. was awesome. It was impressed on me as a child by the home run leaderboards, TV commercials, video games, Little Big League, and the Griffey jerseys my friends wore to school, 3,000 miles from Seattle. Griffey was both great and cool — cooler, probably, than any baseball player since.

But my younger brothers wouldn’t have remembered any of that — to fans who came to baseball just a few years later, Griffey was an often-injured, often-cranky right fielder for the Reds. When he played, he was pretty good, but his contract was a millstone for Cincy.

During that All-Star Game in San Francisco, Griffey was older, slower, and heavier than he’d been a decade before. Rather than gliding around center field, he contributed to the night’s biggest highlight by trundling after an eventual inside-the-park home run that took a weird hop off the wall in right. But he was good again, for a while. It wasn’t a trip back in time so much as a look through an old photo album, but it was enough.

It’s starting to feel like that with Pujols. For the first time in three years, it feels like we can once again talk about him as a great ballplayer — not as the remains of a great ballplayer, or as a contract, or as a player whose body was so brittle with age that if we talked about him too loudly, he’d fall over.

After two years of plantar fasciitis, knee surgeries, and back pain, Pujols is healthy, and because he is, he is still an incredibly productive player.

That’s not to say that he’s still producing at a prime level. You can tell that this is late-stage Pujols just by looking at him. His face and body have changed, his bat’s a little slower, and while he was always a little stiff and ungainly in the field, he’s even more so now. Aside from the home runs, his numbers are now only good, not great. Some of that’s due to the game’s changing offensive environment, but even relative to the league average, Pujols is getting on base less and hitting for a lower average than he did with the Cardinals.

Speaking of those Cardinals days: If Pujols leading the league in home runs is supposed to be a look back into the past, let’s take a moment to do that.

Baseball’s a weird sport, and maybe because the impact of one individual player is relatively small, and because of the sport’s century-old reliance on numbers as a framing device, we’re not really equipped to separate the great from the transcendent. It’s why Mike Trout, in absolute terms perhaps the best baseball player ever, is underrated — we’re not really willing to draw distinctions past a certain level, as if the 10 best players in baseball are all equally amazing.

So let’s take stock of the first decade of Pujols’s career, because we take for granted how he was drafted out of a junior college in Missouri in the 13th round, then, 22 months later, made his major league debut at 21 and immediately became one of the 10 best position players in baseball. Over the first 10 years of his career, he played an average of 156 games a year, hitting .331/.426/.624 over that span, with 408 home runs and 914 walks, but only 646 strikeouts. He was the NL MVP three times and runner-up four times, which makes sense because he led all NL position players in WAR from 2005 to 2010. Not on the aggregate over that time — he led NL position players in WAR every year, six years in a row, according to Baseball-Reference. He was worth as much over the average player (about 48 wins) over the first eight years of his career as David Ortiz has been worth above replacement-level in the entirety of a 19-year career that’s going to get more than a few Hall of Fame votes.

From 2003 to 2009, Pujols put together seven consecutive seasons of eight wins or better. Miguel Cabrera, who inherited Pujols’s title as the best right-handed hitter in baseball, has never put up even a single eight-win season.1

That’s not a shot at Cabrera, by the way. A creepy bronze facsimile of his face will likely hang right beside Pujols’s in Cooperstown one day, and he’ll have earned it. But we talk about “All-Stars” and “MVP candidates” as if they’re all created equal, and for a decade, the National League produced tons of All-Star-quality first basemen (Cabrera, Joey Votto, Ryan Howard, Prince Fielder) and MVP-quality players at other positions (Chase Utley, David Wright, Ryan Braun, Matt Holliday), all of whom suffered immensely by being compared to Pujols. Some of them snuck in MVP seasons after Pujols started to decline, or when he had a relatively down year, or when the voters were just tired of Pujols winning, but the rest were vaporized, the way you would be if you were too close to an explosion at a natural gas refinery.

Pujols had different origins than Griffey, but once they got to the majors, their career paths were similar: Both were dominant and iconic until they left their original teams around age 30, at which point age and injuries started to pile up, and the magnificent players they were faded into something less. Time erodes athletes, who are stalwart and indefatigable until the moment they’re not. At that point, what they were doesn’t matter. What does matter is that what they are now is neither what they once were nor what they’re being paid to be.

It happens all the time in baseball. It happened to Pujols and Griffey, it’s happening to Cabrera and Justin Verlander, and it’ll happen one day to Trout, Bryce Harper, and Clayton Kershaw. Because time is the only force of nature greater than Albert Pujols.

At some point during the injuries and the decline, Pujols became a Contract. No longer the best player in the game, he was a sunk cost, the financial version of the title character from It Follows. This is the natural result of fans following the game like GMs, which is, to be clear, not a bad thing in and of itself. Baseball fans, particularly hard-core fans, are better informed now than ever, and an informed constituency leads to higher standards of decision-making from those in charge, or at least that’s the idea. It’s opened up new ways to think about, understand, and love the game, and all of that has changed the way we view it for the better.

But it also means that we’ve empowered and evangelized a mind-set that looks at Pujols and doesn’t see the player that was, the unique, devastating, inexorable player from a decade ago. A man, manifestly, who’s accomplished so much and then started to suffer the results of the effort necessary to do what he’s done for the past 15 years. Instead, we look at Pujols and see “10 years, $240 million.”

And left to run unchecked, that mind-set is a callous, insidious way to look at the game, one that is at the same time cynical for reducing a man to the fraction of dollars spent over value produced and naive for the shallowness of its understanding of the game’s history and economics. It’s gross not only because it ignores how criminally underpaid Pujols was in St. Louis, even to the moment when he left, making $16 million a year, but because dwelling on the decline diminishes the memory of the peak.

That’s why it’s good for us that Pujols, while currently in the midst of what would’ve been his worst season with the Cardinals, is leading the league in home runs. He’s a flawed player whose best days are behind him, clinging on at the end while the true future of how the game is going to be played runs circles around him.

But this season, if only for a while, he’s reminding us that this creaky old man who makes too much money used to be, by far, the best baseball player in the world. And if you want to, you can still see that player at work.

Your Non-Major Sports Heroes of Summer