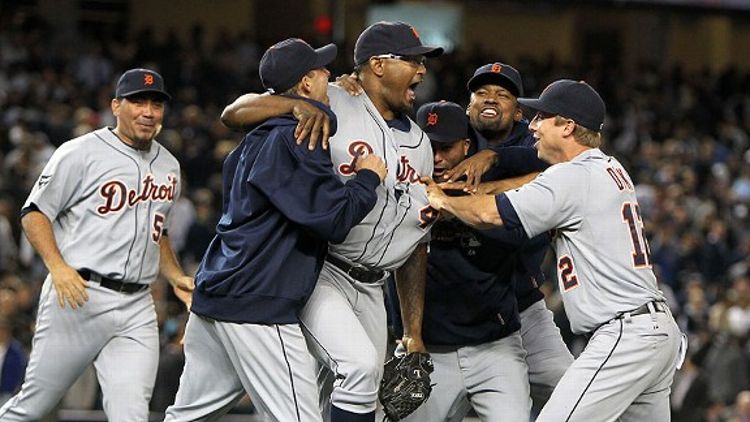 Forty-one seconds. That’s how long it took the Tigers to make Yankee Stadium’s short porch their own, grab a 2-0 lead, take control of a series many didn’t expect them to win, and ultimately defend the AL Central’s honor after years of playoff failures.

The two players who made it happen embodied the twin pillars of the Tigers brain trust. The no. 2 hitter, Don Kelly, is the type of super-utility guy that Jim Leyland loves. A natural tinkerer, Leyland trotted out five different lineups in the series, with Kelly being the third no. 2 hitter and third third baseman. Asked before the game why he wanted to use Kelly in such a big spot, Leyland said he liked Kelly’s pull power, particularly with Yankee Stadium’s very inviting right-field wall beckoning. Ivan Nova got ahead of Kelly 0-1, threw him a curveball that broke to the knees. Kelly waited on the pitch, reached down, and whacked it deep into the seats to stake the Tigers to a 1-0 lead.

The next batter up was Delmon Young. The man who acquired Young, Dave Dombrowski, has built great teams everywhere he’s gone. He assembled the nucleus of the great Montreal Expos teams of the early- to mid-’90s. He played a role in both of the Florida Marlins’ championships, presiding over a Leyland-managed 1997 club that featured a blend of homegrown prospects and aggressive, big-ticket acquisitions, then watching from a distance as the core he helped build won it all again in 2003. That same year, the Tigers club Dombrowski now ran won an unthinkable 43 games. But Detroit’s GM saw encouraging signs amid the wreckage. Rather than be conventional and wait years before acquiring any veterans, Dombrowski snagged players like Ivan Rodriguez and Rondell White to help turn the club in the right direction, while the next generation of prospects ripened on the vine. Three years later, the Tigers made their first World Series in 22 years.

Five years later, the Tigers are one step away from getting back again, and Young is a big reason why. No one thought much of Detroit’s move to acquire the bulky outfielder from the Twins on August 15. Here was a player who ranked among the worst defenders in all of baseball. Touted as a future hitting star when he came up with Tampa Bay five years ago, Young’s lack of patience at the plate had made him a very beatable hitter, too, one who posted perennially low on-base percentages due to his lack of walks, but also a lesser power hitter than prospect hounds expected — if you’re hacking instead of waiting for a pitch to drive, there’s a good chance it’s going to bite you in the ass. Young did have a strong 2010 at the plate, hitting .292/.350/.562 in the final four weeks of the season as the Twins rolled to a division title. But he reverted to being mediocre — terrible, really — with Minnesota this year, hitting .266/.305/.357 with four homers in 84 games. Still, Dombrowski remained intrigued by the natural talent that made Young the no. 1 overall pick and the game’s top-rated prospect. When Brennan Boesch’s thumb put his season in jeopardy, Young was a cheap, easy-to-acquire Plan B with a lousy track record, but also a hint of upside.

That upside was on display against the Yankees. Young blasted three homers in the five-game series, capped by his obliteration of a hanging slider into the left-field seats on the first pitch he saw, right after Kelly’s bomb. In a lineup that includes front-line offensive players like Miguel Cabrera and Victor Martinez and big 2011 performers like Jhonny Peralta and Alex Avila, it was Young who came up biggest for the Tigers against New York. Joe Girardi’s binder can probably name the five best Indian restaurants in Moldova. Pretty amazing that it had nothing to say about Young’s tendency to swing at the first pitch. That or none of the Yankees’ pitchers got the message.

The other key player the Tigers acquired at the deadline also didn’t get much love, but for different reasons. Doug Fister had found a bit more success than Young, settling in as a respectable mid-rotation starter in Seattle. But skeptics doubted that it would last. Right-handed starters with fastballs that top out around 90 and low strikeout rates don’t typically put a World Series hopeful over the top. It was easy to look at Fister’s moderate success and peg it to Safeco Field’s forgiving confines and an excellent outfield defense.

But from the moment he landed with the Tigers, Fister started pitching like he never had before. Schedule certainly played a role. After facing the Rangers in his first start in Detroit, Fister pitched against the following opponents: Indians, Orioles, Indians, Rays, Royals, Indians, Twins, A’s, Royals, Indians. All sub-.500 teams except the Rays, who ran out a middle-of-the-pack offense this year and offered pitcher-friendly Tropicana Field as the backdrop for Fister’s start. Still, schedule can only explain so much. In 10 starts, the lanky right-hander struck out 57 batters and walked just five over 70 innings, forging a preposterous strikeout-to-walk ratio of Mariano Rivera-esque proportions. If Fister wasn’t the top-performing pitcher in the American League over the final two months of the season, he was very close.

The potential for a successful Game 5 Yankee Stadium start by Fister was a big reason I picked the Tigers to win the series in five games. And he didn’t disappoint, going five strong innings, allowing just one run on a Robinson Cano blast, on five hits and two walks, while striking out four. In that park, against that lineup, with a loaded, rested bullpen augmented by Max Scherzer’s availability, that’s a great day’s work. Fister’s pitch sequence to Alex Rodriguez leading off the bottom of the 2nd demonstrated his ability to keep hitters off-balance. Fister started A-Rod with a fastball inside, which helped back him off the plate. He hit the outside corner with another fastball. An 84-mph changeup dived below the knees and made A-Rod chase for strike two. Fister then went inside twice in a row, once up and in, once missing the inside corner thigh-high. Having backed his man off the plate again, Fister came back with another fastball, knee-high, right on the outside black. A-Rod could only watch as Ted Barrett rang him up for strike three. Nothing more complicated than 90-mph fastballs with a little changeup mixed in. But taken as a whole, with Fister changing locations and the hitter’s line of vision, going in and out and in and out like a Squeeze Box-playing fool, it was a thing of beauty.

Justin Verlander’s got a running mate. The Tigers lineup has another threat. And the Texas Rangers will have their hands full.

Two minutes hadn’t passed in New York before the phone lines blazed with fury on WFAN and the YES Network’s announcers expressed their shock over the end of the Yankees’ season. Leaving aside the sense of entitlement that comes with winning a kajillion World Series, the lathered masses did have a point. Their Bombers outscored the Tigers 28-17 in the series. And all the Evil Empire got to show for it was a lousy ALCS T-shirt … on its way to Botswana by the boxful as we speak.

Well, that and the latest, predictable round of New York scapegoatery. The latest victim of Jose Valverde’s Dance Mania 2011 Tour was one Alex Rodriguez. You might remember A-Rod from such films as, “Why the hell are we paying you $275 million, you bum,” and “Stop being such a choker, you choking choke of a choker.” The $275 million wasn’t too hot an idea, granted. But one would have thought that the idea of A-Rod as someone who can’t come through in big spots would have disappeared with his transcendent performance during the Yankees’ World Series run in 2009. Nope! The boo birds came out after Rodriguez struck out in the 7th. One of the first reporter questions lobbed at Joe Girardi in the postgame press conference asked if A-Rod hit so poorly (.111/.261/.111) against the Tigers because he wasn’t fully recovered from injuries sustained earlier in the year, or if something else was the culprit. Oddly, no one asked about Mark Teixeira (.167/.286/.278); Nick Swisher (.211/.250/.368); Russell Martin (.176/.333/.235); or the Patron Saint Of Teflon, Cap’n Jeter (.250/.280/.292), who was one of multiple Yankees to fall just short of clearing the wall on a supremely frustrating night full of squandered opportunities.

These small sample size failures aside, this was a Yankees team with a very potent lineup, but one with no true present-day superstars after Cano and Curtis Granderson. It was a good rotation, but one with no Cy Young-caliber starter other than CC Sabathia. It was a team with the best record in the American League, but one also vulnerable to the vagaries of a short series, where dramatically outscoring your opponent won’t necessarily work out in your favor over time, because there is no time.

The Yankees will be back next year, their aging core a year older. Jesus Montero cracking the everyday lineup will help in that regard. But you can also bet on Brian Cashman making moves to inject new life into the team, especially on the pitching side. They’ll spend more than any other team in baseball. And they’ll be scary as hell … again.