The Most Depressed Fan Base: Reviewing Last Month’s Saddest Cities 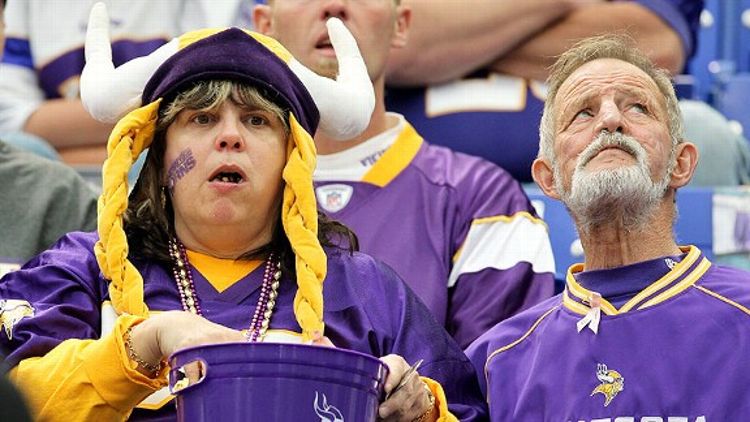 “September, I remember / A love once new has now grown old.”

Those aren’t just the final lines in a lovely Simon & Garfunkel song, and they’re not just the latest anthem for the Red Sox Nation. They also signify a brand new month, and a brand new chance to christen the saddest, most lowdown fan base in America. (And relevant parts of Canada.) The good news for the schadenfreudists out there is that as winter threatens to descend, the October edition is extra depressing.

Here’s how it works: The aristocracy of Grantland gathers (at a round table, I believe) to submit their individual lists. These are collected by a sort of hunchbacked, silent man with a somber face and an unnerving forehead scar, and he brings them to my cramped cubicle. At the same time, he delivers my slice of bread and a bowl of discolored, lukewarm water that the editors call “soup.” Anyhow, a first-place vote is worth eight points, a second-place vote is worth seven, and on and on until one. You get it.

Please note, the committee is concerned with cities that are currently the most depressed. Past history is relevant only if the ancient woes haven’t been remedied, as with the ongoing Chicago Cubs drought. If a long dry spell is broken, a la the Boston Bruins, it ceases to matter.

Last month, Cleveland won a thriller over Seattle. This month, 28 cities were represented in the voting. Some of the lesser-knowns included Durham, N.C., Jacksonville, Fla., Syracuse, N.Y. (this voter must have stopped reading after “most depressed”), Columbus, Edmonton, Tampa, Fla. (a city so depressed that fans didn’t go to the ballpark even before things got bad), Denver, and San Diego.

Just to give you an idea of how serious the October edition was taken by Grantland, here are some other fun facts:

Best Line About a City That Didn’t Qualify

“What a slap in the face to Hartford that the NHL is returning to Winnipeg, which is really the Canadian Hartford.”

After this comment, Hartford and Winnipeg stared at each other suspiciously, unsure which of them had just been insulted.

Buffalo, if you can believe it, didn’t get a single vote. Here was Mr. Joseph House, the clown prince of the depressed fan base cabal, on Sacramento:

“It’s hard enough to get behind a team owned by Dan Snyder. … [Try rooting for] a team that is owned Dan Snyder and has Rex Grossman at quarterback. Awful fate.”

It could be worse. The situation could be reversed, with Grossman as owner and Snyder as quarterback. Oh wait … that’d be awesome.

Jay Kang had New York second on his list:

“New York — Yankees are doing fine, I guess, (editor’s note: no longer true.) but who, but the criminally depressed, start “occupations,” without stated goals? And why Wall Street? It’s like starting a protest next to a beached Orca. Yes, at some point, it was probably a dangerous animal. But now it’s fucking dead. And this is the time you choose to protest the Orca? And if I get one more gleefully stupid message in my newsfeed from some 30-40 year old fellow MFA grad/’occupier’ who wants to pretend like he’s in fucking Egypt or Libya or Tehran (followed by the requisite ‘be careful out there’ comments from other morons), I’m going to seriously plotz all over my computer.”

For the sake of full disclosure, we are required to tell readers that Jay Kang is sponsored by Citigroup.

(Also, what does “plotz” mean? I’m not sure, but everyone at Grantland just slowly backed away from Jay’s computer.)

(Also, the Yankees are no longer fine.)

“At least hockey is starting.”

“Was there something else?”

“Miami: The Hurricanes are 2-2 including losses to Maryland and Kansas State; the Florida Panthers had to actively work in the offseason just to spend up to the NHL salary floor; the most entertainment anyone is getting out of Dwyane Wade is his fight with David Stern (although that was some pretty substantial entertainment) and hahaha the LOLphins.”

For effect, picture this innocent dolphin smiling at everything Katie Baker says, not understanding that it’s getting TOTALLY PUNKED.

Back to the Baker:

“Hey — at least Braves fans can distract themselves with the start of the upcoming Thrashers season … oh, wait.”

And Larimer, who put Atlanta second, with a similar theme:

“Right now, the NBA is gone, the Braves just imploded and the only thing Atlantans have to look forward to is … nothing, right? Wow. For like an hour there I forgot the Thrashers left, but yep, that definitely happened. Sorry, Atlanta! This marks the second time in a row we have forgotten about an NHL franchise in this feature. Well done, Grantland.”

We’re like the Winnipeg of websites. Am I right, Simmons?! (He refuses my high-five.)

I mean Hartford! Hartford! (He refuses again, and I realize I’m talking to my Bill Simmons poster, not Simmons himself.)

Ladies and gentleman, I can confirm that WE WILL HAVE A NEW CHAMPION!

Cleveland had just three votes this time, but they were all first place votes. Here’s Jay’s take:

“Who realized, with the rest of the country, that they are trotting out a midget quarterback, no wide receivers and Peyton Hillis.”

Almost makes you want to plotz on your computer, right, Jay? RIGHT?!

“I can’t figure out whether trying to turn a ‘Tarvaris’ into a ‘Luck’ is alchemy or a shrewd business plan.”

“I’ve decided these are my top 3 every month (Cleveland, Seattle, and Minneapolis) unless a borderline sports catastrophe happens to another city. Like, a meteor hitting one of their stadiums or something.”

Buffalo PR executives are now having an emergency meeting to determine if it’s worth staging a meteor accident for the free publicity.

“The good news is that K.C. barbeque is fantastic, so depressed K.C. fans can just eat and eat. I’d like to thank the Chiefs and Royals for contributing to America’s obesity problem.”

“The city recently hosted a sold-out preseason hockey game between the Penguins and the L.A. Kings that had to have been a bit of a sad reminder that Kansas City was once oh-so-close to getting an NHL franchise and instead it has a nice arena just looking for love in all the wrong places.”

“About to lose an NBA franchise?”

“If I lived there, I’d be more worried about losing the Pacers to contraction than losing Peyton Manning for a season.”

“Notre Dame won last weekend but they’ve still had a disappointing season, and something tells me Curtis Painter ain’t gonna be no Steamin’ Willie Beamen.”

And Joe House, with what might be the line of the week:

I know what you’re all wondering — where did Simmons rank Boston? Well, I’m here to tell you that Boston didn’t make his list. Whether he was just exercising a sort of soft control on his underlings, or he’s truly at peace with himself and his city (perhaps because its current title drought stands at a devastating three and a half months), it was a legitimate abstention. Not so for seven others, who nearly put Boston over the top. Let’s start with House, who says what we all feel:

“Is it too much to ask for the Red Sox historic collapse to portend a resumption of the mediocre ways of New England we knew & loved for almost 15 years in the late 80s through the 90s? We could all blame ESPN The Magazine.”

“I was going to leave them out on principle, since so many Boston fans were so quick to get super sour grapesy about the Sox and it’s also not fair for Boston to win THIS too, but I guess they’ve earned the token shoutout. And also I wanted to link to this because it gives me great joy.”

Cho, who had Boston second:

“They’re not number one to me just because they still have too much going for them and too many recent successes. It’s like you can’t feel bad for a rich kid who happened to have dinged his Porsche. He still has a Porsche.”

“Boston — There’s something incredibly sad about people backing away from the mess they made with a ‘It wasn’t me!’ expression on their faces. Nobody is going to lose any sleep over Ray from Needham losing any sleep; but watching Francona leave and Epstein flirt with the Cubs is really like a pound of Morton’s poured on a gut shot.’

We have a winner! Minneapolis was on all but two lists in some form, but it didn’t get a single first-place vote. Chris Ryan had them fourth:

And for the parting shot, we turn back to Ole Faithful, House.

“Can’t be no. 1, the Lynx are in the WNBA Finals! Is it Donovan McNabb’s fault that he continues to do Donovan McNabb things anymore?”

So that is that. Congratulations to Minneapolis, the saddest city on the sporting landscape. Come back next month if you find yourself feeling too happy for your own good.

Previously in this Series:
Debut Edition

Filed Under: Grantland, Most Depressed Fan Base, Shane Ryan

Taking It To The Virtual Hoop With 2K12