Taking It To The Virtual Hoop With 2K12 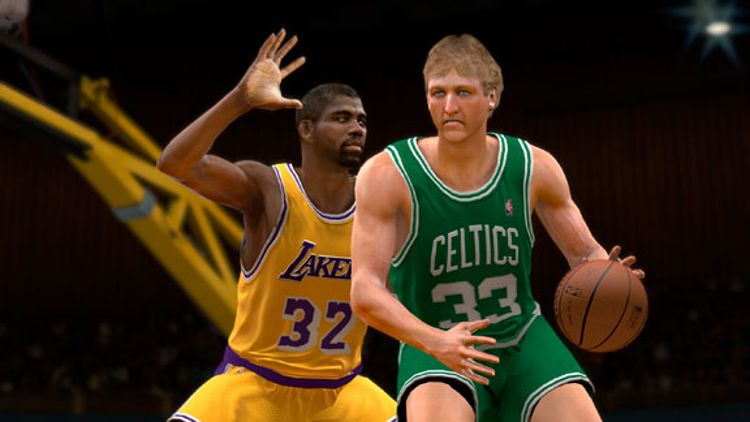 OK, fine. There’s still no NBA. So we did the next best thing: We had our interns, Danny and Jovan, write about NBA 2K12, which was released Tuesday. They completed some very serious and grueling research, and present their findings are below.

We played three exhibition games: Thunder vs. Mavericks, Lakers vs. Celtics, and Hawks vs. Suns. Here’s our initial review of the game: what we liked, what we hated — and a Greg Jennings reference for good measure.

Jovan Buha: It took almost three hours, but by now I’ve played enough games of 2K12 with you to give my two cents. While the graphics and presentation have far exceeded those of any previous sports game, there are still too many fundamental problems. It seems this year’s 2K focused on the superficial aesthetics of the game, and not enough on the gameplay itself. 2K is the monopoly — so I can’t seek basketball virtual reality anywhere else — but I don’t see major (on-court) improvements from 2K11.

Danny Savitzky: The presentation is OK with that? stunning. From the new intro video featuring NBA legends like Larry Bird, Julius Erving and Hakeem Olajuwon, to the new game menus, to the pregame presentation, to the inclusion of Kurtis Blow’s “Basketball” on the soundtrack, this year’s version blows away anything we’ve seen from a basketball franchise. Even the player models are far improved (except for Jason Collins, who looked like a puffer fish) and all the on-court motion looks fluid and smooth. When I played NBA 2K10 and NBA 2K11, people who walked through my living room would comment on how they thought I was watching an actual game. This is the first year it has come close to tricking me, too.

Aesthetics are one thing — as for the gameplay, it has left me wanting. Every year there is a bit of a learning curve. When I played 2K11 for the first time, I was furious with the new passing mechanics that had me throwing the ball like I was DeMarcus Cousins. Eventually I got used to it. I’m betting the same thing will happen this year.

Jovan: I’ve never understood how people mistake video games for actual games, but this year’s could dupe people. Visuals definitely matter in video games, though, I’d counter that realistic gameplay matters just as much, if not more. Sure, I don’t want to play a crappy game with ’80s graphics, but if the graphics hadn’t changed that much from 2K11 to 2K12, I wouldn’t have been that upset.

On the gameplay issues, a few stuck out. Turnovers — through bad passing, unrealistic steals, weird dribbling moves — were abundant. Big men, such as Zaza Pachulia and Nick Collison, are a little too efficient around the basket, scoring contorted layups and hook shots. But my biggest problem is on-ball perimeter defense. Guards zip into the lane with ease, effortlessly scoring over outstretched arms (or in Daequan Cook’s case, throwing down and-one dunks).

Danny: Defense really is more difficult this year — both on the perimeter and inside — but I support that. Last year, it was far too easy to plop down any schlub center under the rim and defend it as long as you were cognizant of avoiding a defensive three-seconds call. It was surprising to see astonishingly unathletic players performing astonishingly athletic feats, like Collison and Pachulia contorting wildly around the rim to somehow find room to sink a layup. And Rajon Rondo gets to the hoop with ease too often, but I figure that’s only because he’s an elite player. I don’t think we’ll be seeing the same from someone like Beno Udrih this year.

Also, I have to take some objection to the pick-and-roll defense this year. Prior to 2K11, a pick-and-roll was basically an automatic two points. Now it’s nearly impossible to interrupt the pass from the guard to the rolling big, meaning as long as he has momentum toward the basket when he catches it, it’s going to be an easy throwdown.

Jovan: Although the defense as a whole has degenerated, I think the low post defense hasn’t gotten as bad as you say. When I played with the Thunder and the Lakers, the trios of Ibaka/Perkins/Collison and Gasol/Bynum/Odom did a nice job of holding down the paint, blocking shots, controlling the boards and imposing their will (except against that damn Rondo, who actually played to his potential with you at the helm). As you said, I think personnel matters more in this game than ever before, which is shockingly realistic.

But you hit the nail on the head; the pick-and-roll has become unstoppable. Steve Blake and Pau Gasol looked like John Stockton and Karl Malone out there, a travesty when comparing their talents. Not only is it easy to find the open man (whether cutting to the basket or spotting up), but it’s also impossible to stop a quick, adequate guard coming off a screen … it’s almost a guaranteed layup.

Danny: I also noticed that equal ratings in particular categories didn’t always translate to equal results. The most obvious representation of this was the shooting of Ray Allen and Steve Nash. Allen has always been a 2K darling, and if you take open threes with him, you’re going to make about seven out of every 10. Nash is rated just as well as a three-point shooter (and, if you ask me, he’s a better shooter than Allen in real life), but when I took open threes with him, I bricked the majority; I was 4-of-11 with Nash from beyond the arc, and only one of those was contested (and that one went in). They clearly do painstaking research to devise these ratings, so why don’t elite-rated shooters like Nash, Matt Bonner, and Steph Curry shoot as well in the game?

Jovan: Allen has the reputation (and the stats/accolades) of being the greatest shooter of all-time, causing 2K to generously grant him God-like shooting abilities. Give him any breathing room to get a decent shot off, and it’s likely in. While Nash, Curry and Bonner are super-elite shooters, they still don’t have the pedigree that Allen has on paper (Nash is practically equivalent, but perception-wise Allen edges him out).

Another component has to be the form and shot release. As you know, some players have harder releases to master (I’d definitely put Bonner in that category), thus decreasing the accuracy and efficiency of their shooting, no matter their rating. Kobe Bryant and Joe Johnson, two of the better scorers in the game (although JJ kind of sucks now), were inefficient with me controlling their shot form. While I may have forced a few jumpers, both missed a few wide-open ones, something that rarely happens in real life.

Danny: The change I was most looking forward to this year was the implementation of new post mechanics. Well, that hasn’t really worked out so far. What promised to be intuitive and impressive turned out to be indecipherable and clunky. There aren’t even any printed controls for the post moves! Often I found myself fiddling with the right stick while engaged in the post trying to do cool things, but it doesn’t work in 2K12 so I’d end up just taking a lame jump hook. Other times I’d drive with Rondo or Jason Kidd, accidentally do an awesome ball fake and then have no idea how to shoot afterward. That was the biggest bummer for me.

Jovan: We briefly discussed this before the game out, and I had a feeling this is what would happen. It’s almost impossible to successfully translate a repertoire of post moves into a video game because so much of the post game is reading the defense. Though it may take a split second or two in real life, it takes a little longer to read the defense, process it, then perform the intricate move. In theory, it’s great. In actuality? It sucks. It’s too complicated, and is likely going to leave most users scrapping for points with their guards and wings. This leads to an imbalance in the overall team concept. As a whole, 2K delivers pretty well. Besides the visual improvements, though, not much has changed.

Danny: There’s one major area that has changed, and it makes for a more realistic experience — something you’ve strongly advocated for here. This year, 2K has finally addressed what I’m going to call the Greg Jennings Quandary. Too often it has been possible for a user to put the team on the back of one particular player and succeed while completely ignoring the rest of the squad. While Kobe would like to believe that’s how things work, they don’t. Really, you need to spread the ball around to win in real life. And you have to do that in 2K12. Last year, when playing with the Mavericks, I could dump the ball into Dirk on nine out of every 10 possessions and score more than enough points to win. If you try that this year, it’s going to end in a mess of turnovers, blocked shots, and somebody crying in the corner. Teamwork is now a priority, and that’s one of the best things to ever happen to this game.

In Defense of Wussing Out in the NFL