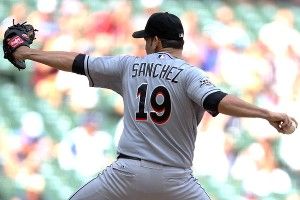 Every five years, the Marlins realize they’re not contenders, call up their old boss Dave Dombrowski, and trade established veteran players for a bunch of prospects. The last time this happened, they gave away Miguel Cabrera and got back six players, none of whom has or ever will provide significant value in Miami. Things will almost certainly work out better this time.

The Tigers addressed their two biggest needs in the trade, acquiring Anibal Sanchez to add depth to their starting rotation, and Omar Infante to upgrade from the horror show that was Detroit’s second-base situation.

Sanchez replaces one of the players for whom he was traded, Jacob Turner (more on him in a minute). The 28-year-old righty is a four-pitch pitcher whose best offering is his changeup. But despite a fastball that merely hovers in the low 90s, he’s no finesse pitcher, striking out 8.2 batters per nine innings this year (and more than a batter an inning last year). He’s walked a career-low 2.5 batters per nine innings this season, with a career-high 47.6 percent ground ball rate. After battling injuries early in his career, he’s been the model of health for the past two and a half seasons, making 83 starts since the beginning of the 2010 campaign. He’s a much more reliable and better rotation option than the untested Turner, who’d surrendered 24 base runners and four homers in his three starts this season, tossing just 12⅓ total innings.

Infante blasted five homers and posted a 1.109 OPS in his first 17 games this season, leading to speculation in some circles that he might be having a power breakout at age 30. Not so much, as it turns out. Since that torrid start, he’s hit .278/.304/.374 with just three homers (but also 17 doubles), nearly perfectly in line with his career numbers. Given that Detroit second basemen were hitting a combined .201/.286/.276 this year and that the new guy is a plus defender, the Tigers will gladly take the Omar Infante Experience instead.

No Miguel Cabrera here, but these are both solid upgrades for a Tigers team that’s already spent big bucks to retain the original Miggy and Justin Verlander, and lock up Prince Fielder for nine years. After sweeping the White Sox over the weekend, Detroit’s back in the driver’s seat in the AL Central, and has designs on a World Series run. In that situation, you trade young talent for win-now help, and don’t look back. That the trade didn’t cost the Tigers top prospect Nick Castellanos makes it even better.

The deal could work out to be a big win for the Marlins, too. Start with what they lost. Aside from neither player being Miguel Cabrera, both weren’t likely to stay Marlins for long: Sanchez becomes eligible for free agency at year’s end, while Infante’s slated to hit the open market at the end of next season.

In return, the Marlins got three players with the proverbial six years of club control each. The 21-year-old Turner is the big catch. Ranked the 21st-best prospect in the game by Baseball America last year, Turner’s stock has slipped a bit since then. As Keith Law noted, there might be a bit of Rick Porcello effect in play here: Big high school power arm gets fast-tracked through Tigers system, has fastball neutered by pitch-to-contact orders, sees velocity and strikeout rate slide as a result. There’s still plenty of raw material here, though, and the Marlins can give Turner a little more time to develop, given they’re not making a playoff run this year (at least).

The other two players headed to Miami, minor league catcher Rob Brantly and lefty Brian Flynn, both project as more B-level prospects. Brantly is a lefty swinger with a big frame (6-foot-2, 205 pounds) and middle power (just three homers in 82 games across Double- and Triple-A this year); the Marlins organization isn’t exactly flush with great catchers, though, so he could have a future in Miami. Flynn’s a 22-year-old lefty who just got promoted to Double-A and could end up a reliever down the road.

You’ll know how the Tigers fared in this trade very soon. It could take years before we get a proper read on the Marlins’ haul.