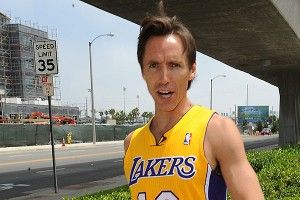 On the first day of free agency, officials from the Toronto Raptors embarked from Nanookian lodges by snowplow to ambush Steve Nash at his annual charity event in New York City’s Chinatown. Undistracted by the aroma of pork and chives wafting out of nearby Prosperity Dumpling, they appealed to the Canadian citizen’s sense of patriotism. They dangled sacks of bullion far bigger than what other teams were offering. They even signed Landry Fields to a $20 million contract to prevent the New York Knicks from using him as trade bait. But Toronto’s sweaty mating dance ended without consummation. In the end, Nash’s options came down to New York or Los Angeles, and he chose the latter.

Let’s ignore Toronto momentarily (or indefinitely, if you’d prefer) and gaze upon the sun-bleached skeleton of the franchise Nash left behind in Phoenix. In 2010, the Suns finished second in the Pacific Division with a record of 54-28. They had the NBA’s finest offense and fell to the Lakers in the Western Conference Finals. As of last week, three of that 2010 team’s top four scorers — Nash, Amar’e Stoudemire, and Grant Hill — are now on teams in New York and Los Angeles. The Suns aren’t being presented as a victim here, but arterial spray from the team’s dismemberment shows how the NBA’s richest blood is pooling in the league’s biggest markets.

With the NBA politburo approving both the relocation of the Nets to Brooklyn and the trade that gift-wrapped Chris Paul for the Los Angeles Clippers, the league now has four aggressive and well-financed teams in the nation’s two largest cities. This offseason, talent has migrated accordingly: Nash, Antawn Jamison, Grant Hill, Jamal Crawford, Chauncey Billups, Deron Williams, Joe Johnson, Gerald Wallace, Brook Lopez, Jerry Stackhouse, Mirza Teletovic, Jason Kidd, Raymond Felton, Marcus Camby, J.R. Smith, and Steve Novak all joined or re-signed with the Lakers, Clippers, Nets, or Knicks. And don’t forget indecisive bumbler Dwight Howard, still flailing ineptly toward one of those teams. The other major destination is Miami, where Ray Allen and Rashard Lewis signed multiyear deals to sling up wide-open 3-pointers and yell at Mario Chalmers.

Hold up. Wasn’t the lockout supposed to counteract the growing polarity between large and small markets? When the owners shut down operations last summer, we were told the work stoppage was, at least in part, because the league needed parity. “There’s a real willingness of the high-grossing teams to pitch in and put in some dollars,” Stern told NBA TV in an interview discussing a plan to triple revenue sharing among teams. “And there’s a real desire on the low-grossing teams to have the money to make them competitive.” Everyone knows the lockout was a chrome-to-your-dome power play against labor, but it’s remarkable how quickly the illusion of interest in leveling the playing field dissipated after ownership secured a larger percentage of profits.

While players have been maligned as disloyal, cowardly, and greedy for amassing in livable places with superstar teammates, their movement toward places like New York, Los Angeles, Miami, and Chicago is mostly the owners’ handiwork. In 1997-1998, Kevin Garnett signed a six-year, $126 million extension with the Minnesota Timberwolves. The contract symbolized a climate of unchecked player salaries, and, like LeBron James’s “decision,” was a convenient excuse for the following year’s lockout. Eager to avoid crippling commitments like Juwan Howard’s $105 million, seven-year contract with the Washington Bullets, owners added maximum salary restrictions to the rookie contract scale that was instituted by the 1995 CBA (take this moment to remember Glenn Robinson’s $68 million, ten-year rookie deal with the Milwaukee Bucks). A gaggle of obscenely wealthy businessmen were determined to minimize risks and unwittingly created the conditions for today’s big-market “super-teams.”

While teams still enjoy modest financial advantages in retaining their own free agents, most excellent players will receive identical offers from any suitor. To prevent a young superstar like Russell Westbrook from inking a Juwan Howard windfall, the NBA has guaranteed that he earns the same amount as inferior players like Brook Lopez, Eric Gordon, and Roy Hibbert. This is fantastic if you’re the Thunder. If you’re the Pacers, not so much. For the Sixers, Jrue Holiday’s recent musings about desiring a max contract are sad and terrifying.

By artificially limiting player salaries, the NBA insured factors beyond pay stub size became more important than in any other popular American sport. Points of differentiation are market size, existing talent, climate, and proximity of movie studios willing to cast a muscular, mealy-mouthed center as a winged centaur in Narnia vs. the Mighty Ducks: Vengeance of Price Caspian.

Houston is the fourth largest city in America, but even the Rockets have discovered the difficulty in attracting top-flight talent to a team without another superstar on the roster. In 2010, Daryl Morey recruited Chris Bosh with a nifty iPad demo, encouraging tweets from soon-to-be-retired Yao Ming and advanced metrics based on Roswell alien technology. The following offseason, a completed deal to land Pau Gasol was cut into ribbons by Czar Stern. And over the last month, Morey has shorn the roster of most salaried players in hopes of trading for Howard — an impending free agent who hasn’t even feigned interest in re-signing with the Rockets.

So Houston, a franchise that has finished with a losing record only once in the last decade, is forced to make unorthodox, almost reckless moves. To pry away restricted free agent Jeremy Lin — a player they cut not long ago — the Rockets loaded up a “poison pill” deal and offered $25 million to a dude who has started 25 NBA games. The Rockets delivered another back-loaded offer to the Bulls’ Omer Asik, a backup center who perpetually wears the expression of someone who just got caught looking at pornography on his Droid. Both Lin and Asik could be busts, but even those skeptical of Morey’s brilliance should admire his dedication to inventiveness within a crooked system.

Instead of bemoaning the NBA’s lack of foresight, we should suspect that this is how Stern and his cohorts wanted it. But more importantly, are we happier? Was it better when superstars Kevin Garnett and Allen Iverson spent years withering away without enough surrounding talent? Would we have been more entertained if LeBron stuck around on the Cleveland Cavaliers instead of helming the most hated squad in history in Miami? No way. While fans of strip-mined teams in America’s infertile armpits kick rocks and study Draft Express instead of box scores, the rest of us will watch the Heat take on Nash, Kobe Bryant, Pau Gasol, and whichever globe-crushing young center the Lakers end up with. Sorry, Toronto, this is how things are.