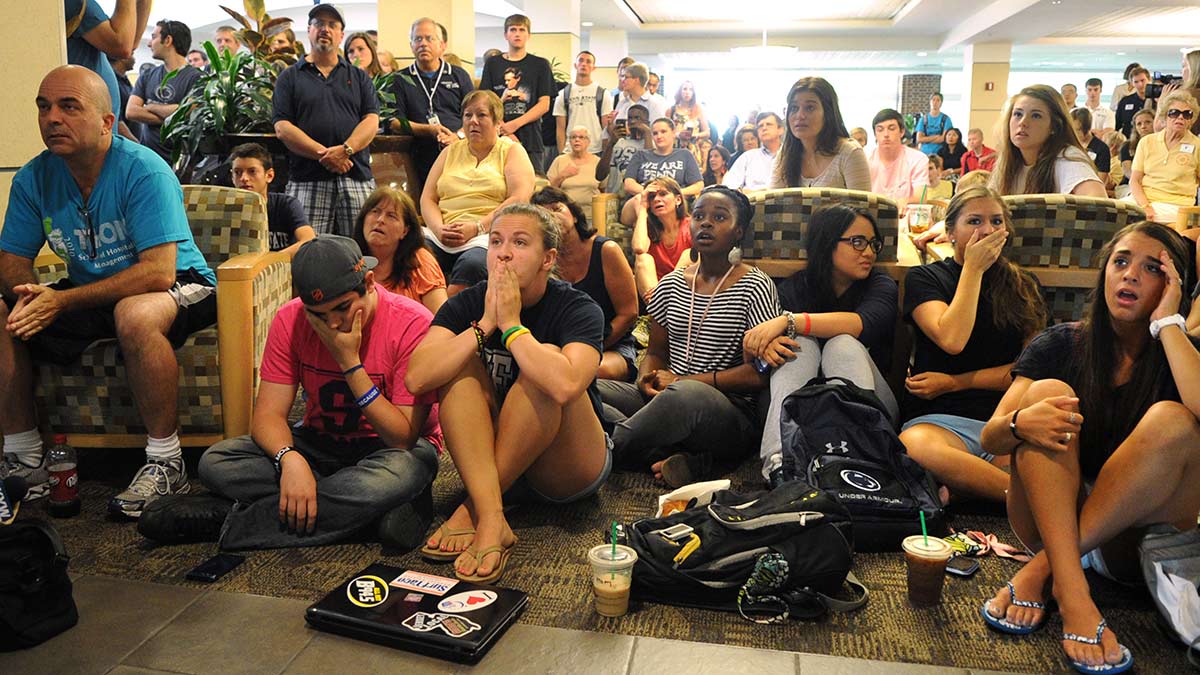 I. A friend of mine, a fellow Penn State alumnus, texted me on Monday morning with two seemingly paradoxical thoughts: He believed the NCAA to be — and I will quote him directly here, because I sort of agree with him — “monumentally full of shit”; he also believed, given the circumstances, that the penalties levied against Penn State’s football program felt more than fair.

I do not know if these thoughts are reconcilable, since the sanctions against Penn State emerged straight from the NCAA’s politburo in Indianapolis. I also do not know if these draconian measures really will succeed in resolving anything, and I do not know if they will even direct the conversation to the proper place, in regard to the issue of child abuse or the notion that the priorities of major college football programs are hopelessly skewed. Mark Emmert, the NCAA’s president, seemed to think that this would send a message to any programs that are “too big to fail”; having spent last week at the SEC’s football media days, I can assure you that Auburn is not planning on downsizing its weight room anytime soon.

So whether this litany of punishments lends any sort of moral structure to a situation that is entirely devoid of it, or it just piles another useless layer onto a patchwork of ethical failures, I cannot say. All the NCAA absolutely assured us when Emmert stood before a press conference on Monday morning is that Penn State will field a subpar football team for many years to come.

II. The irony of Emmert making an example out of Penn State — the irony inherent in this whole damned story, from November to now — is that Penn State strove so hard to be the example. Joe Paterno lobbied for the repeal of freshman eligibility; he long believed that grants-in-aid should be limited and that traveling squads should be cut down, and that the NCAA should do more to clean up the sport. “For years,” author Michael O’Brien wrote, “Joe seemed to be a voice in the wilderness, crying out for sanity in the operation of big-time college football.”

At some point, the powers that be at Penn State got so caught up in this meme that they apparently forgot it could not subsist on words alone; now that Paterno is gone, his last best chance to reform big-time college football is to be remembered as one of the worst villains the sport has ever known.

I suppose that is a rather severe existential punishment in itself.

III. Here are some questions that came to mind immediately after Emmert’s press conference: Since the NCAA is stripping Penn State of a portion of its football scholarships, and since the NCAA believes that Penn State needs to reset its culture, and by proxy the culture at large, should that money be applied toward academic scholarships instead? How will the NCAA use these sanctions to emphasize a message of restraint and perspective in athletics? To what charitable causes, exactly, does the money from Penn State’s fine go? And what actions will the NCAA take, specifically, to combat sexual abuse going forward?

Is all of this just a bold stroke of vengeance, or is there a purpose behind it?

IV. That people spent several days arguing about the presence of a fucking statue is proof that the more deep-rooted questions are going to be incredibly difficult to focus on. Let me assure you that many of us with deep ties to the university were not particularly concerned with the statue, one way or another; it was an embarrassing little sideshow made for talk radio. All this argument served to do was to frame the irrational extremes: those for whom this scandal is just another cause for staged cage matches, both in print and on air; and those blind loyalists who refuse to acknowledge any of the revelations of the Freeh Report and wind up promoting a stereotype about the entire region.

The removal of the statue provides no real resolution. Nor does the revocation of a decade’s worth of Paterno’s victories. All this succeeds in doing is furthering his martyrdom among the acolytes. It is the first and only case I can recall of a record being vacated for something that had no direct impact on the on-field product. Why not vacate all of Paterno’s victories? Why not vacate the victories dating back to 2001, when Mike McQueary witnessed Jerry Sandusky with a boy in the shower and the ugliest part of the apparent cover-up began; or to 1966, when Sandusky was hired as a graduate assistant? Why vacate only victories of which Sandusky was not a part?

V. None of this, of course, has much to do with new head coach Bill O’Brien. As far as we know, everyone associated with the Sandusky scandal has been (or will be) let go from their positions at the university. I understand that the innocent are often punished for the acts of the guilty, and I suppose this is one of those harsh lessons that college sports can impart on young people. In a way, it permits O’Brien a certain job security that no other Division I coach will have; as long as he maintains a clean program, no one will expect much of anything until at least the late 2010s, which I imagine is what Emmert had in mind when he crafted these sanctions in the first place.

There is no way to make up for what has been lost. All we can do is start over again. If it takes Penn State fielding a team full of walk-ons and castaways in the years to come, if it takes losses to Temple and to the dregs of the Mid-American Conference to reinforce the horror of what took place, then I will accept that. What I want now is for my alma mater to become what we’d always imagined it to be, an agent of change in a sport that desperately seeks it. If failure equals success, the punishment will be justified.