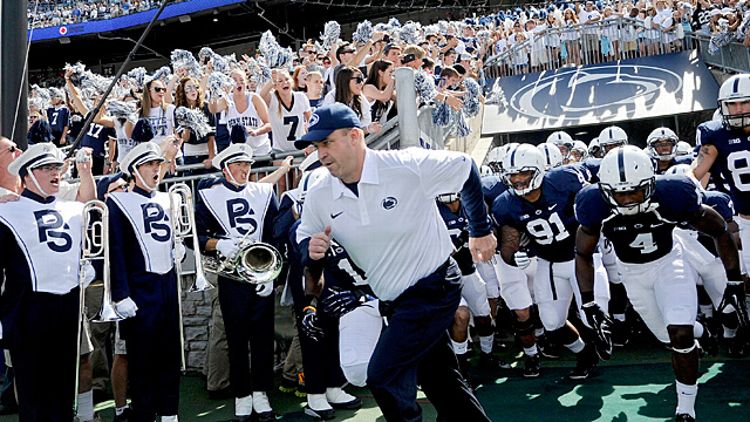 Here’s how to understand the NCAA’s decision to give back some scholarships it took away from Penn State: The NCAA is trying to survive in a moral universe in which everything it does, and everything it doesn’t do, sucks.

After the Jerry Sandusky mess, the NCAA was out to make a statement. It took away 20 of Penn State’s football scholarships from its allotment through 2017 and banned the Nittany Lions from postseason games through 2015. After Mark Emmert’s new decision, 10 of those scholarships will reappear this year. Penn State might return to the postseason early, contingent on its “continued progress.”

Imagine the NCAA as an incompetent cop. In the first scenario, it’s Hank Quinlan in Touch of Evil. In the second, it’s Barney Fife.

Whatever action the NCAA takes, it’s going to enrage one camp or the other. If the NCAA came down on Johnny Manziel for making money off his autograph, opponents of amateurism (like me) will write stuff like this. If the NCAA suspends Manziel for a half, others will complain that the NCAA is going easy on the Heisman winner.

The Penn State investigation offers the NCAA a rare chance to wiggle out of this problem. Penn State got in trouble because it allowed an accused sexual abuser to run free in its athletic facilities. This was plainly despicable. But Jerry Sandusky doesn’t fall into the amateurism/no-amateurism debate. Emmert’s move is more of an admission that the NCAA wandered clumsily but well-meaningly into a criminal case.

Not coincidentally, the NCAA is getting near-universal praise because of this Penn State news. SI.com’s Stewart Mandel blessed the move (and has been agitating for it for a while). Wisconsin AD Barry Alvarez — whose job is a lot easier with Penn State in weakened conditioned — said “I think it’s great.” The rare peep from the two traditional camps of NCAA bashing came from USC’s AD, Pat Haden, whose school is suffering from NCAA-mandated scholarship reductions of its own. “I’d love to have some scholarships back,” Haden told SI.com. But Haden’s football coach, Lane Kiffin, called the move “awesome.”

The NCAA is taking a page from the Roger Goodell school of PR — I mean, discipline. When the press and fans want blood (e.g., when Michael Vick fights dogs) Goodell levies a brutal penalty. But when the offender is “rehabilitated” (e.g., when Vick is a changed man), Goodell reduces the penalty, and gets a lot of good press out of that, too. Here, the NCAA clobbered Penn State when Sandusky was history’s greatest monster. Then it offered clemency when the image of Sandusky was replaced by the fighting O’Briens.

(I don’t quite get how this NCAA decision is “punishing the innocent” any more than normal. Doesn’t just about every NCAA decision punish the innocent? USC still has scholarship reductions, but Reggie Bush only got painted out of a mural.)

I guess the NCAA can be congratulated for doing something without pissing everyone off. The NCAA looks malleable. And progressive. Its chilly, bureaucratic corpus seems to contain a heart. But the reason we’re saying this is because the underlying issue of amateurism remains safely untouched. And you know what? That still sucks.