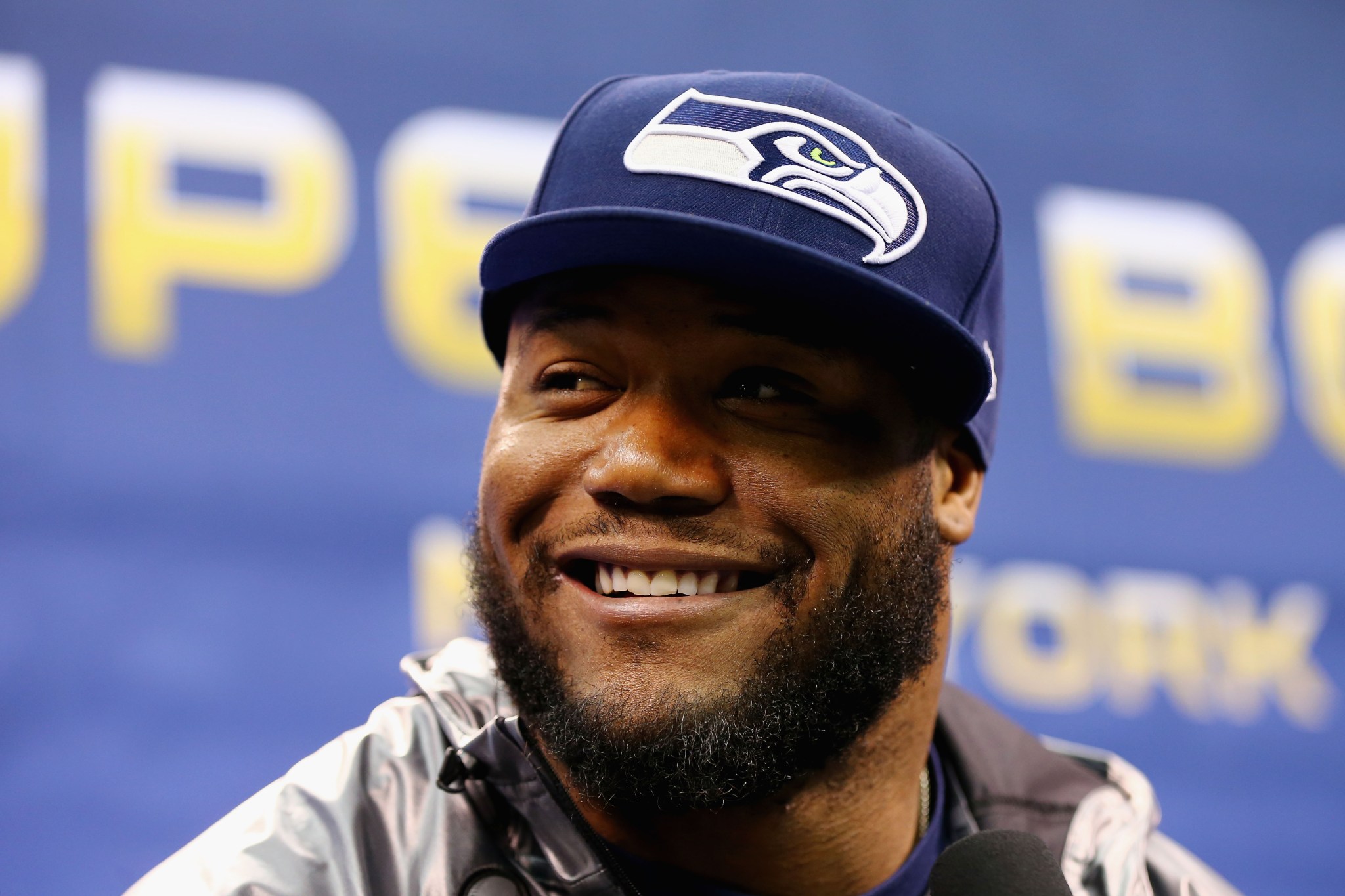 The Seahawks don’t suffer from a lack of star power. There’s Richard Sherman and the cloud of insanity that comes with him. There’s Marshawn Lynch and the cloud of awesome that comes with him. Then Russell Wilson. Pete Carroll. Earl Thomas. Kam Chancellor. Percy Harvin. Michael Bennett, Red Bryant, and Cliff Avril. Everybody. All of them have their own fascinating stories, too. Most were cast aside and overlooked at one point or another, and then somehow made it. It’s ridiculous how many people on that team have beaten the odds to make it here. You could probably say that about most teams, but with the Seahawks, it’s true for the biggest stars on their roster.

But you knew all that, or if you forgot about any of it, the avalanche of Super Bowl stories this week have probably reminded you. That’s one thing that’s kind of unbearable about Super Bowl week, when the NFL’s already inescapable coverage cranks everything up to 11: Almost nothing we learn this week is anything we didn’t already know.

So for me, the biggest surprise of Super Bowl Week has been Michael Robinson. He’s the fullback for Seattle, the guy Marshawn Lynch calls his “eyes,” and someone pretty much everyone seems to love.

Wednesday afternoon, he was posted up next to Lynch, surrounded by reporters, almost like a press agent. After a couple four-word answers from Lynch, and Robinson jumped in: “I’m going to slide up in this thing to break up the monotony a little bit. If Marshawn ain’t able to say nothing to you guys, you can direct your questions to me.”

So Robinson conducted Marshawn’s press conference from there: “He hasn’t talked to you guys for most of his life. I think he just said that. He just wants to play ball, boss.”

So what does ‘Beast Mode’ mean?

What’s up with the Skittles?

Robinson: “He loves his Skittles before the game, boss.”

What’s up with Marshawn saying “Boss” all the time?

Robinson: “He’s just all about that action, boss.”

Will Richard Sherman teach Marshawn how to handle the media?

It was pretty great to read through this whole transcript Wednesday night — the latest twist in Lynch’s attempt to drive the media insane — but it also just made me glad Michael Robinson is around this week, because he’s one person whose story hasn’t gotten told enough. 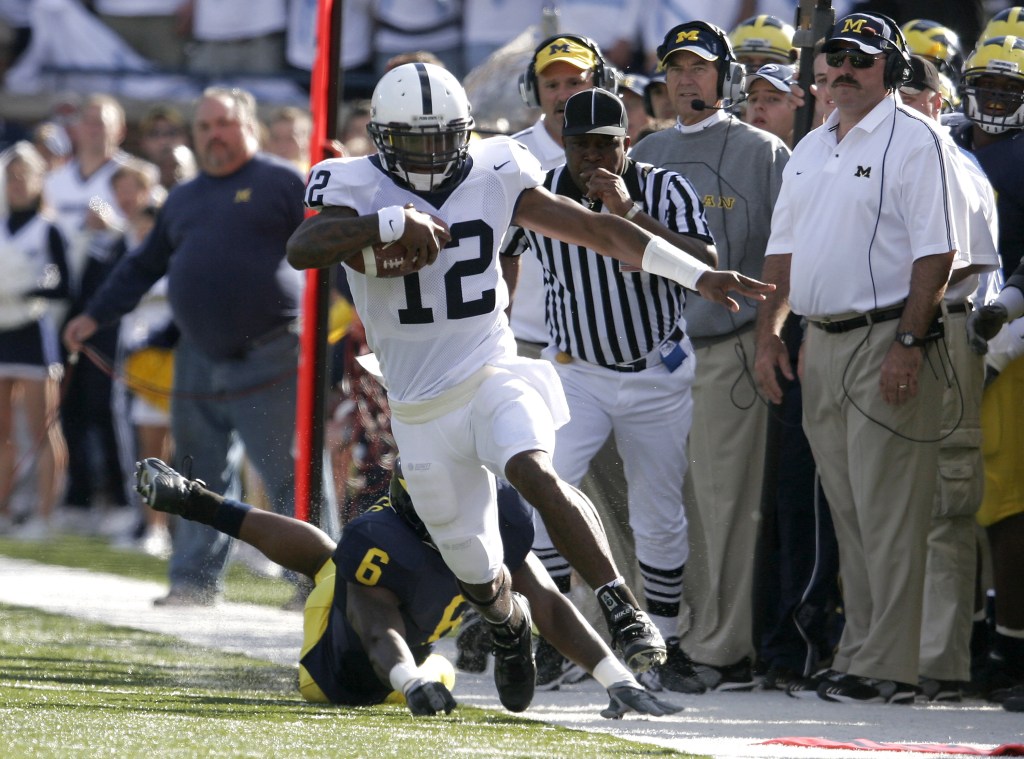 You probably remember him from Penn State. He came in from Richmond as a dual-threat quarterback, then spent his first three years shuttling between running back and wide receiver, along with playing some quarterback. As a senior, he finally took over, under center, full time, and he won Big Ten player of the year as the Nittany Lions won the conference.

As he said this week, “One of the biggest gifts I got from Penn State was Coach Paterno showing me what perspective is and having perspective and being able to sit back — in the midst of chaos — kind of step back and see the future a little bit. Playing a different position has kept me in the league for eight years. Where I’m at today, I couldn’t be here without Penn State.”

He graduated in three years, with two degrees, and he’s 12 credits away from a master’s. From there he went to the 49ers in the fourth round. They made him a running back full time, had him returning kicks and playing special teams while backing up Frank Gore.

Then, after a fullback got hurt, Robinson shifted over to replace him, and the superstar high-school quarterback turned college receiver turned college quarterback turned NFL running back … was now an NFL fullback, a position that barely even exists anymore. But he was better at it than anyone could’ve expected. “I was a natural runner,” he said Monday, during a press conference. “Naturally a guy that sought a little bit of contact.

“The move to fullback wasn’t that bad at all,” he added. “When you want to continue to play in this league, you kind of go where they tell you to go.”

He continued playing special teams, too, and helped out wherever he could. When he got cut by the 49ers, a former teammate was coaching with the Seahawks and insisted they sign him.

Since 2010, he’s been in Seattle, clearing the way for Marshawn Lynch to do Beast Mode things and rush for 4,600 yards in that same span, as the Seahawks have gone from perennial punch line to juggernaut. He also continued producing the “Real Rob Report,” a YouTube series you should watch, if only for proof that Marshawn even ignores his own teammates if they’re trying to put him on camera.

Then this season happened. Seattle drafted a rookie to play fullback in April, and Robinson was due $2.5 million in non-guaranteed money this year. “I knew my salary,” he said, earlier this year. “I knew the business of this game and I knew there was a big chance that I would be let go and I was just hoping and praying for an opportunity that I could come back and come to work.”

As training camp unfolded, he was taking an anti-inflammatory called Indocin, and one day he woke up feeling off.

“After the second preseason game against Denver, I just felt like I was getting the flu,” he remembered Monday, during a press conference. “I had mentioned to the doctors, ‘Look, man, I think I’m going to come in next week and get some fluids,’ and stuff like that. It just went all downhill from there — kidney failure, liver failure, all of it.”

So Robinson spent the next few weeks in and out of the hospital — and off the field — and wound up getting cut. Somehow he’s not bitter about this. “It’s the business,” he said. “If you can’t put a product on the field, you can’t be on the team.”

After three years turning into a locker-room favorite and leader for the Seahawks, he was gone. And still sick with this mysterious illness. In the end, he lost 30 pounds and nearly lost his kidneys. It turns out the anti-inflammatory he’d been prescribed by the team helped spark whatever that nightmare was.

Midway through the season, Robinson got healthy again, his replacement Derrick Coleman got hurt, and it opened the door for the Seahawks to do what they’d wanted to all along. “When we had the opportunity,” said Pete Carroll, “we didn’t hesitate for a moment to get him back because of all of the intangibles that he brings. His experience, his leadership, his toughness … The reunion was really important to this football team.”

“It’s big,” Lynch said. “He’s a mentor for me. He’s got a lot of knowledge about the game. He plays with passion. That’s something I can identify with.”

Asked whether he had second thoughts about coming back, Robinson explained it like this: “I wrestle with it, but it was easy when I looked at my relationship with the guys on the team.”

"It was like a big reunion. @MoneyLynch almost cried when he saw @RealMikeRob walk in." – @RicardoLockette

Think about how hard it would be, to be talented enough to be the superstar at Penn State, and then willing to adapt into a fullback who plays special teams. People spent two years rhapsodizing about Tim Tebow’s humility, but he never did that. Or maybe it’s just a testament to how talented Robinson really is — he’s played four different positions at the highest levels of football.

The Seahawks are one of the only NFL teams you see that straight up punishes people in the running game. They line up in jumbo sets where everyone knows it’s going to Marshawn Lynch, and it works. Part of the credit has to go Robinson, who made the Pro Bowl last year.

“He’s our offensive lineman in the backfield,” said tackle Russell Okung. It’s clearly worked so far. And in a week saturated with all kinds of great stories that everyone eventually gets tired of hearing, it’s fun getting to know the guy I’d never really heard about.

One of the coolest things about watching sports is watching athletes for long enough that we get to see the strange twists their careers take. Mistakes can turn into opportunity somewhere else, and the truth of how things play out sometimes ends up being more rewarding than anything we could’ve come up with on our own. This is how life works for most people anywhere, but sports let us watch it happen in this little bubble. With guys like Peyton Manning, or the long, twisting journey of Beast Mode.

Then there are guys like Robinson we forget to notice. You remember him from Penn State, then popping up on the Niners and Seahawks as a decent fullback. But then you find out his organs were failing four months ago, and now somehow he’s back and leading the Seattle locker room into the biggest game anyone on their team has ever played.

Nobody needs a whole lot more backstory from this big stupid week, but I’m glad Michael Robinson’s here. His story is as crazy as anyone’s, and we’ve been watching the whole time. It just took a Super Bowl to make us pay attention.