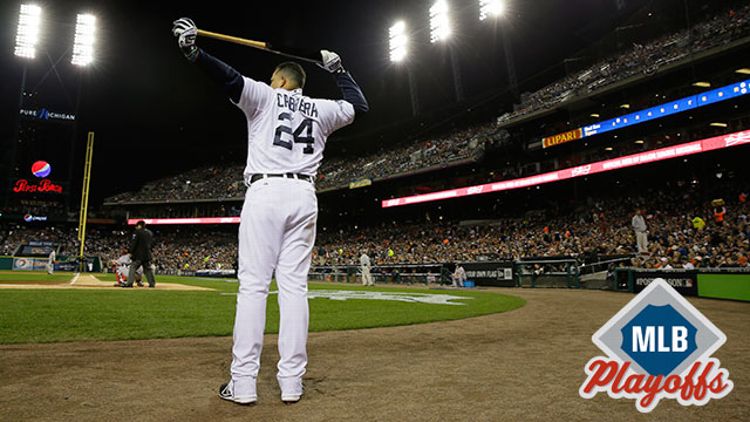 The Red Sox won a nail-biter Thursday, topping the Tigers, 4-3, and moving to within one game of claiming the American League pennant. In a game that featured a few spectacular plays, it was the handful of squandered opportunities that stood out most of all.

The Tigers failed to recognize Miguel Cabrera’s injuries. That hurt them badly.

Runners on first and second, two outs, bottom of the first inning, scoreless tie. Jhonny Peralta lashes a single to left field. With two outs, you generally want to be aggressive and send the runner home from second, hoping his speed, an errant throw, or both will be enough to score the run. Problem is, the runner headed toward third is Cabrera, whose health has improved enough to make him a threat again at the plate, but not enough to make him much better than a statue at third base and especially when running the basepaths. Lining up the play in left is Jonny Gomes, who isn’t a Gold Glover by any means. Still, Cabrera is running so slowly and so gingerly these days, you can’t possibly send him.

Tom Brookens, the Tigers’ third-base coach, windmills his arm around anyway as Cabrera approaches third. Gomes fields the ball cleanly in left, causing Brookens to change his mind and throw up the stop sign. Too late. Cabrera runs through the stop sign — hobbling more than running, really — and gets thrown out by 10 feet.

Fox showed several replays of the play, with Tim McCarver watching and doing analysis. McCarver gets a lot of grief for everything from being dazzled by a cardboard box to handing out golf etiquette tips in the middle of a baseball game (both of those things happened during Game 4) to making sometimes obvious statements. But he still knows his stuff, and even with his broadcasting career nearing the end, he still offers some nuggets of wisdom. Here, McCarver noted that third-base coaches will sometimes wave a runner initially as a ball bounces toward an outfielder, only to quickly put up a stop sign if that outfielder fields the ball cleanly and comes up in proper throwing position. For an ex-player, that kind of move might seem like second nature, but for viewers, it was a new piece of information, something I’d never heard in the thousands and thousands of games I’ve watched over the years.

There was just one problem with the analysis: McCarver didn’t consider Cabrera’s health, and how it might affect the play. Far more importantly, Brookens apparently didn’t seem to consider it either.

Though he is a below-average defender and glacial baserunner when healthy, watching Cabrera do anything other than hit right now is beyond painful. It’s hard enough for a behemoth like Cabrera to stop his momentum in ideal circumstances. Given that he’s dealing with groin and abdominal injuries that have affected everything from his swing to his fielding, asking him to obey a sudden stop sign is a heavy burden that runs the risk of an awkward stop that might make those injuries worse. Though he did make a nifty barehand play on a grounder in Game 4, Cabrera’s overall defense has been atrocious in the playoffs. Game 4 included a line drive that ticked off his glove into left after Cabrera could only get about eight inches off the ground. Game 5 then featured a booted grounder in the second that helped turn what might’ve been a one-run inning (check out Mike Napoli’s second-inning moon shot to dead center and ask yourself if you’ve ever seen a longer home run in cold October weather) for the Red Sox into a three-run catastrophe.

We’ve talked multiple times during the postseason about what the Tigers should do with Cabrera, given his iffy health. One idea was to move him to DH, which would mitigate the defensive problem, although not the baserunning one. Starting catcher Alex Avila suffered a strained left patellar tendon Thursday night, because Major League Baseball still foolishly allows catchers to block home plate, and thus baserunners to bowl them over. If Avila can’t go in Game 6, you can make a strong case for moving Victor Martinez from DH to catcher rather than playing seldom-used backup Brayan Pena there, giving the Tigers a defensive downgrade behind the dish but also an upgrade at two other positions, if they move Andy Dirks or Don Kelly to left and shift Peralta from left to third base. This almost certainly won’t happen. If Avila is healthy he’ll play, of course. But even if he isn’t, Jim Leyland hasn’t shown much willingness to make moves that dramatic.

All of this goes to a larger issue: managers not knowing how to cope when their best players get hurt. Watch Hanley Ramirez flail hopelessly at pitches at the plate and see a player who’s trying to gut out a painful rib injury … and failing. Watch as ground ball after ground ball whizzes by him and you see a player who belongs on the bench. But Don Mattingly isn’t evaluating the situation objectively, considering Nick Punto’s playable defense, and realizing that is the best course of action for his team. He’s seeing a star player who says he wants to play, and a team in desperate need of a jolt if it hopes to storm back and advance to the World Series. So he’s wishing for results from Ramirez that are unlikely to ever come, and hurting his team in the process.

It’s not quite so simple with Cabrera. After being reduced to a singles hitter for a couple of weeks, he’s back to hitting for power, though he’s still a singles hitter of sorts because there’s no chance in hell he’s legging out any doubles right now. Still, the Tigers aren’t recognizing what he can and can’t do. They’re not making aggressive moves like pushing him to DH, or even identifying in-game risks like trying to make him stop at the last second in a key situation. Those mistakes may have cost them this pivotal game — and maybe by extension, a trip to the World Series.

Once again, the Red Sox leaned on their defense and their bullpen.

Jon Lester’s third start of the postseason was easily his worst, at least in terms of commanding pitches and preventing baserunners. The left-hander gave up seven hits and three walks in 5⅓ innings; with the right sequencing, the Tigers might’ve been able to parlay all those baserunners for four or five runs. Instead, they tallied only two against Lester.

The first inning ended on Cabrera’s baserunning hara-kiri in the first, as Detroit got a walk and two singles but didn’t score. In the fourth, the Tigers put two runners on with one out, before Pena tapped a pitch back to the mound. Lester nearly made a disastrous throw into left field, but Stephen Drew reached back across his body to snag the throw and prevent an error, stepped on second, then completed the 1-6-3 double play to end that inning. In the sixth, Lester again put two runners on with one out, this time spooking John Farrell enough for the Red Sox manager to summon Junichi Tazawa from the bullpen. Pena greeted Tazawa with an RBI single, cutting the lead to 4-2. But the next batter, Austin Jackson, swatted a grounder to third. The Tigers’ fastest runner, Jackson figured to be very tough to double up on an around-the-horn play. But rookie Xander Bogaerts, starting his first career playoff game, got rid of the ball in a hurry. Dustin Pedroia then made an efficient turn at second, and the Sox got another inning-ending twin killing. The most costly double play occurred in the seventh. With runners on first and third and nobody out, Cabrera came up, seeking to reach base for the third time in four trips. Instead, the world’s best hitter rapped into an easy 4-3 double play, a shining case of gladly taking two outs in exchange for one run if there ever was one.

Cabrera’s run-scoring double play snapped a 17⅓-inning scoreless streak for Boston’s bullpen. That just gave the pen a chance to start a new streak. Riding the postseason success of Tazawa, lefty setup man Craig Breslow, and closer assassin Koji Uehara, Farrell decided to let it ride and try to get 3⅔ innings from his relief trio. After Tazawa’s 1⅓ innings to hold the fort, Breslow got the last out of the seventh and the first out of the eighth. It was then time for a little extra Koji, a five-out save opportunity that would be his longest in this year’s playoffs. Uehara simply dismantled the Tigers from there. He faced five batters and retired all five, throwing 19 of his 27 pitches for strikes.

Uehara combined his excellent repertoire with some heady pitch selection to finish off Detroit. With two outs in the ninth, slap-hitting shortstop Jose Iglesias came up with only one goal in mind: get on base, by hook or by crook, to give the bigger bats at the top of the order a chance to knock him in. Uehara’s best pitch by far is his splitter, a cruel beast that seems to dive a foot or more just as it’s about to reach home plate, turning batters into mush. But the beauty of that pitch is its deceptiveness against big, dangerous hitters, the splitter serving as a nasty surprise when one of those sluggers gears up for a fastball and swings from his heels. Uehara knew Iglesias would be more than happy to take a walk, and that throwing splitters that might dive out of the zone wouldn’t be all that useful against a hitter likely to keep the bat on his shoulder. So taking the right calls from David Ross, he threw six fastballs to start the at-bat. Iglesias showed resilience, fouling off a couple of pitches to stay alive, then taking the seventh pitch of the at-bat, a splitter in the dirt, for ball three. Knowing he absolutely didn’t want to give up a walk at that point, Uehara fired another fastball, inducing a popout from Iglesias, one that ended the game and sent the Sox back to Boston with a chance to punch their ticket to the World Series.

The Red Sox, once again, did the little things just a little better than the Tigers did. These guys would’ve certainly approved.

About Last Night: Happy to Be Napoli