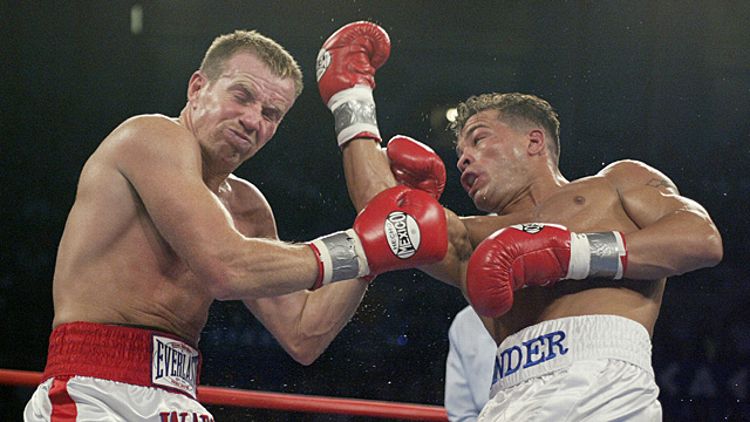 Provided clinch-happy heavyweight champ Wladimir Klitschko isn’t involved, it’s rare that the lasting image from a boxing match is that of a hug. But a hug is precisely what I picture when the subject of the third and final fight between Arturo Gatti and Micky Ward comes up. Over a period of 13 months they spent a total of 90 minutes beating the shit out of each other, drawing blood, raising welts, puncturing eardrums, abusing livers (above and beyond what Gatti did during a typical night on the town), breaking hands, and knocking each other to the canvas — and each time when it was over, they fell into an embrace. First they bowed their heads and brought their foreheads together, then Ward draped his gloves around Gatti’s neck, then Gatti did the same, then assorted managers and matchmakers closed in to take part, then Arturo and Micky spoke a few words to each other, then they separated for a second, and finally they came in close for a tight, traditional, chin-on-the-other-guy’s-shoulder hug. Boxers almost always come to respect the hell out of each other by the end of a hard fight. But this was something different.

“People don’t remember [who won the fights],” blow-by-blow man Jim Lampley says in the new HBO documentary Legendary Nights: The Tale of Gatti-Ward. “They remember the sacrifice, the combat, the mayhem, and the love. And that’s really what this rivalry provided.” Lampley is fighting back tears as he says this — and not quite winning that fight. You can chalk that up to Lampley being Lampley, a guy who has welled up on premium cable more than anyone this side of Carrie Mathison. But you can also attribute it to the effect the Gatti-Ward fights had, and still have, on nearly everyone who saw them. A boxing trilogy as a love story? It sounds absurd. But love is the primary characteristic separating Gatti-Ward from other thrilling boxing rivalries that don’t get feted in the same way. A series of savage fights paved the way to a deep and genuine friendship. It’s the absolute ideal of what sports should be — inhuman athletic performance combined with total, unmistakable humanity.

Ward, 37 years old and both physically and emotionally wrung dry by 50 grueling fights spread across 18 years, had announced before the third bout with Gatti that he was retiring afterward, win or lose. In that hug at the end, in that moment in which they knew they would never have to exchange punches again, the relationship instantly transformed. Fighters are reminded to protect themselves at all times; now Gatti and Ward could let their guards down. “Before that, there was a mutual respect between both of us,” Ward told me during a 2009 interview. “But after we were done fighting, it blossomed into more of a real friendship.”

I conducted that interview with Ward for a tribute feature on Gatti, who died that year under mysterious circumstances at age 37. We all knew about the public side of the Gatti-Ward friendship: Micky accompanied Arturo on his ring walks beginning in 2004 and trained him for his final fight in ’07. But I wanted to get to the heart of their relationship. I asked Ward what he missed most since his friend’s death a few weeks earlier. “Just the calls,” he said. “The calls, at different hours. We both kept odd hours, so I’d call him late sometimes. It’s funny, when we’d be together, we’d talk to each other, and people would be like ‘What are they talking about?’ Like, we understood each other, but people were like, ‘What the hell are they talking about?’ We had our own little language.”

That was true even when they weren’t speaking. Gatti and Ward had a shared understanding that nobody else could infiltrate because nobody else had experienced what they had gone through, together, in the ring. But that doesn’t stop those of us on the outside from trying to get in there, from trying to keep feeling what Gatti and Ward made us feel. We’ll use every form of media available to transport us back to that place.

This Legendary Nights doc was a no-brainer. HBO produced a dozen episodes of the series in 2003, most of them 30 minutes in length, then revived it for this 75-minute one-off. (Quick aside: Here’s hoping this isn’t the end of the resurrection; Bernard Hopkins vs. Felix Trinidad in the shadow of 9/11 and the Marco Antonio Barrera–Erik Morales trilogy are both naturals.) This documentary is not the first effort to further immortalize Gatti and Ward on film, nor will it be the last. Not too many fringe contenders who never won major titles get Hollywood films made about their lives (unless they spent two decades in prison on a wrongful murder conviction); Ward walked the red carpet at the Oscars after Mark Wahlberg brought him to the big screen in The Fighter. Next up for the Hollywood treatment is Gatti, with Wahlberg executive producing. Jerry Ferrara is set to play the lead role. The casting is unsettling if you think of Gatti as the epitome of pugilistic cool and Ferrara as Vinny Chase’s festively plump friend, but maybe a sleeker Ferrara will manage to look the part and master Gatti’s French-Canadian Jersey accent. Hell, Wahlberg played Ward as a non-ginger, and that movie turned out just fine. So perhaps Arturtle Gatti will work.

But the reality is that we don’t need a Gatti movie — not when we have his fights on YouTube and this new documentary to say everything that needs to be said about his career and this defining rivalry. Can scripted entertainment possibly live up to the real thing? Almost certainly not. But the Gatti movie will happen regardless, just as a Ward movie unexpectedly did, and there will be books written and additional documentaries produced because the nostalgia for this trilogy and all that it represents won’t die until everyone who lived through their fights has.

There’s more to the enduring appeal of Gatti-Ward, of course, than just how they slugged each other and how they hugged each other. There are extra layers of fascination and idol worship generated by Gatti dying young. It probably didn’t hurt their popularity at the time or after the fact that they’re a couple of English-speaking white guys. And let’s not forget that they were 1 and 1A in any discussion of the most exciting boxers in the world before they fought each other. Gatti was so entertaining that he got inducted into the Hall of Fame this past June despite a résumé that, if he had fought in a safety-first style, wouldn’t have even gotten him on the ballot.

But in the end, it is that unique combination of slugging and hugging that matters most. I spoke with Lampley a few years ago about the relationship between Gatti and Ward, and he hinted at a very important point: Gatti-Ward endures because their kinship made fight fans proud to be fight fans.

“It’s very counterintuitive to people outside of boxing,” Lampley said. “They can’t fathom that guys go in and seem to try to kill each other the way these guys did, and become best buddies and play golf together and one of them winds up carrying the other guy’s belt into the ring behind him after he’s retired. Like Nino Benvenuti inviting Emile Griffith to become the godfather to his son, or Max Schmeling and Joe Louis becoming good friends — it’s unusual in the world at large. It’s specific to combat sports like ours. Arturo and Micky became something like blood brothers, and it was beautiful.”

Eric Raskin (@EricRaskin) is a former managing editor of The Ring magazine and is the editor-in-chief of ALL IN magazine. He cohosts the twice-monthly boxing podcast Ring Theory.