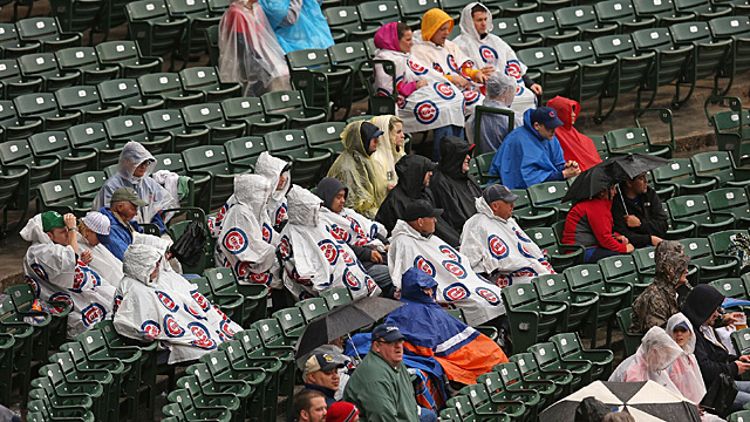 On the one hand it’s hard not to conjure up a little sympathy for Chicago Cubs owner Tom Ricketts. Travel south about 15 stops down the CTA Red Line from the Addison station next to Wrigley Field and there sits another major league ballpark built for Jerry Reinsdorf with tax dollars from the kind people of Illinois. All Ricketts wants to do is spend some money to put up a more modern scoreboard inside a baseball stadium he already owns. Not to mention one that was privately financed. Almost a century ago, and not by him, but privately nonetheless.

On the other hand, Ricketts owns the Cubs (of course that could be a reason to pity him further), and suffice it to say that he had access to the $850 million or so needed to buy the Cubs (the purchase also included Wrigley Field and 25 percent of Comcast SportsNet Chicago). Ridiculous money will abrade sympathy.

And for someone who might need to court more public goodwill to help push through renovation plans for Wrigley Field — the centerpiece of which is a new JumboTron in left field — he’s not grading out very high in charm. Said Ricketts at a City Club of Chicago event yesterday: “I’m not sure how anyone is going to stop the signs in the outfield, but if it comes to the point that we don’t have the ability to do what we need to do in our outfield then we’re going to have to consider moving.” He later clarified his remarks: “We’ve always said that we want to win in Wrigley Field, but we also need to generate the revenue we need to compete as a franchise.”

According to Forbes, the Cubs were fourth in MLB in revenue in 2012. Fourth. And they still lost 101 games. Using a datum point of one, it looks like revenue and winning are negatively correlated. And it’s not like the Cubs are running a charity. If you want to see the Cubs play the lowly Marlins next month, a pair of bleacher seats — and, shockingly, there are seats still available for what’s a glorified AAA game — will run you $129.08 after taxes.

Also, we don’t possibly need to again point out that spending in baseball doesn’t necessarily translate to winning in baseball, right? Just in case …

Of the three highest payrolls in baseball this season — the Yankees, the Dodgers, and the Phillies — not a single one of them is currently even leading its division. The Yankees are doing the best; they’re in second. And they are probably overachieving. The Dodgers are fourth in the NL West and the Phillies are being spared the ignominy of the NL East basement by the same lowly Marlins you have to pay $65 to see at Wrigley in June. In fact, right now the last-place Cubs are outspending the Pittsburgh Pirates by one and a half times on payroll, and they already trail them by four and a half games.

Yes, it’s early in the season, but these aren’t small-sample aberrations. The Yankees have had the highest Opening Day payroll in MLB every year this century and have only one World Series trophy to show for it. The Giants have won two of the last three World Series with payrolls about 47 (in 2010) and 59 (in 2012) percent as large as that of the Yankees.

The A’s were so good at being broke they got an Oscar nomination for it.

Still, Ricketts cried poor. Then, even better, threatened to move. And when he was asked specifically if that was a threat, he replied, “No threat.” At best that’s demonstrating a really poor grasp of the English language. Saying you’ll look into moving your team somewhere else if you don’t get to do what you want literally meets the definition of “threat.”

Where Ricketts may not need money to compete, he probably needs it to pay off the debt used to acquire the club. That list above showing the Cubs with the fourth-highest revenue also shows them being the most profitable team in baseball last year (operating income of $32.1 million). Yes, the most profitable team in baseball — the same one spending $18 million on Alfonso Soriano — is saying it can’t afford to sign expensive free agents. Crazy, right? Well, that operating-income number is before any interest expense.

The Cubs’ previous owner, Sam Zell, wanted the sale financed in a very specific way for tax avoidance reasons. Basically, the cash portion of the deal, which was probably about half the purchase price, had to be funded by debt so Zell wouldn’t have to pay capital gains tax on his capital gains.

Figure something north of $400 million was put into a debt vehicle — and this was 2009, when debt still wasn’t easy to get in the aftermath of the global financial meltdown — and with operating income around $30 million, give or take, the Cubs are in all probability still well in violation of MLB’s debt limit per the terms of the most recent CBA, which caps debt at eight times the operating income.

And that’s one of the reasons ownership wants a scoreboard — the club estimates it would generate about $20 million a year — and wants it pretty much now (they are trying to get an agreement in place so they can start work when the season is over — or rather, when they’ve played 162 games; the Cubs’ season is effectively already over).

But Ricketts doesn’t just want a scoreboard. The left-field scoreboard actually seems like the diversionary tactic of the renovation plan. If he wants to wreck the mid-last-century charm of Wrigley and make it more like every other park (when its defining characteristic is that it isn’t like every other park), let him. The 6,000-square-foot scoreboard–cum–revenue dispenser only impacts the people at the game, and only for the three or so hours a game, 81 games a year. Yes, it would block a couple of the rooftops across Waveland. I still haven’t seen an argument — beyond there being a 20-year contract from 2004 between the Cubs and the rooftop operators — for why that is sacrilege.

Ricketts also wants a property tax exemption (something the White Sox get), more night games, a hotel and office development, expanded use of space that would cut into Waveland and Sheffield Avenues, some multi-story structure to replace the Branded Rum Club, and, oh yeah, a shit-ton more advertising space.

As part of a hotel and office development, Ricketts is looking to put up another 35,000 square feet of billboard space — some of it static, some of it video — near the intersection of Clark and Addison. That’s roughly six (!) times the space of a new scoreboard. That transforms the neighborhood. Yet, for some reason, there has been almost no resentment, or even mention, of turning the public-facing part of the intersection into Pete Campbell’s wet dream. Chicagoans have peculiar senses of outrage.

The focus on the scoreboard as the revenue panacea seems even stranger in light of the fact that the WGN portion of the Cubs’ broadcast rights opens up at the end of the 2014 season. Given that the Dodgers’ recent Monopoly money TV deal gets them about $1.8 million per game, the Cubs can bank on a hefty boost from their current $400,000 figure.

Moreover, the other part of the Cubs’ TV package expires after the 2019 season. And seeing how the deal for half the Yankees’ network put its valuation at around $3 billion, the Cubs have to be weighing the possibility of doing something YES-like of their own come 2020, provided of course the cable-bill inflating RSN fee bubble doesn’t burst by then.

Again, this was MLB’s most profitable team last year on the league’s fourth-highest revenues. Debt service might be a problem for the Cubs, but it’s a problem of their own making, and it’s even less of a stadium-based problem given the TV moneyscape.

But if you’re Tom Ricketts, you can’t go to the mayor and say, “Hey, in order to meet MLB guidelines, I’ve gotta service a fair amount of the debt I took on to buy the Cubs, mostly because the guy I bought it from didn’t want to pay taxes. So can I alter the face of one of the city’s more vibrant neighborhoods? Oh, and can I also not pay some of my own taxes?” Better to issue threats.

It’s worked before. How do you think Jerry Reinsdorf got New Comiskey built?