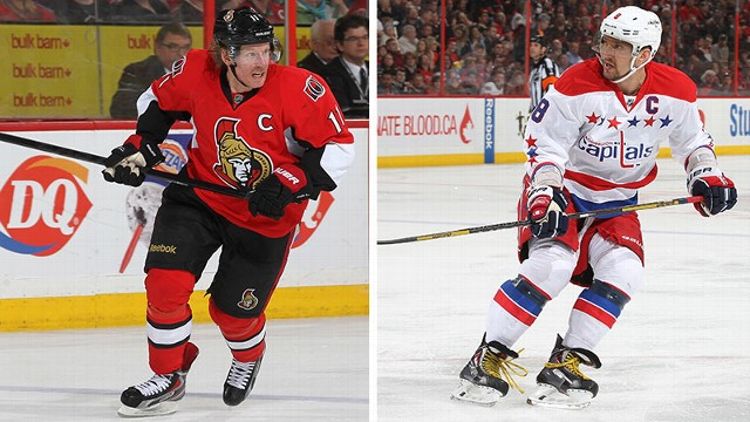 Backstory: While it might not have been all that much of a stretch to predict that Ottawa and Montreal would both make it to the playoffs, no one could have expected that things would unfold quite like this. The Senators, who took the Rangers to seven games last year in the first round, lost three key players ( Jason Spezza, goalie Craig Anderson, and golden child Erik Karlsson) to major injury, but managed to remain in postseason contention through focused play by a merry and motley band of guys. Get coach Paul MacLean that Jack Adams Award already, will ya?

Montreal, on the other hand, was surely not supposed to get off to a blazing-hot start and spend much of the season atop the Northeast Division, even in the eyes of the team’s most optimistic fans. But after ironing out a contract agreement with star 23-year-old defenseman P.K. Subban and rolling to a 13-4-3 record by the end of February, the Habs put themselves in a good enough position that even a 7-7-0 April was enough to keep the division crown. (It helped that the Bruins finished the season in an even worse way.) The defensive corps of Subban, Andrei Markov, Alexei Emelin (now injured), and Josh Gorges has been strong for the Habs, though Emelin’s injury leaves a major question mark.

Essentially, though, this series will be a head-to-head showcase of two of the league’s top young blueliners: Ottawa’s Karlsson and Montreal’s Subban. It doesn’t matter that the two don’t actually match up against one another; they’ll be forced to answer questions about their respective play all series, and fair or not, NHL fans will generate plenty of lasting talking points based on the small sample of play by the two guys.

Big Questions: How on earth did Karlsson make it back from a severed Achilles that fast?! Will goalie Carey Price and the Canadiens bounce back from an alarming mid-April stretch? I just want to interrupt these questions to say that I’ve had this GIF open in a browser tab for the past few hours and every now and then, I click on it without remembering what it is and it’s totally worth it every time I do. Will Anderson keep up the play that made him a Vezina Trophy candidate until a midseason injury and made Ben Bishop expendable? What will have a bigger impact on the series: Montreal’s shaky penalty kill or its effective power play?

Any Bad Blood? Clearly the hockey gods determined Canada wasn’t ready to handle a Montreal-Toronto matchup just yet. Instead we get this combination, the first time the two teams have met in the postseason. And if you’re the Senators, it’s practically a business opportunity! “It’s going to be a great series because of the cities being so close to each other,” captain Daniel Alfredsson said Wednesday. “Ottawa is a pretty new franchise compared to Montreal. Before we had the team, people were either Toronto or Montreal fans, so we have a lot of Montreal fans in Ottawa and we’re converting them one step at a time. Winning this series would probably go a long way to helping that.” He might as well be talking about opening a restaurant, or selling condos. He’ll do great in the front office post-retirement!

Fun Fact: After sparking the wild and crazy “Rihanna-ing” trend that swept a lonely and pantsless nation, the S.O.S. singer’s name crossed odd paths with the Ottawa Senators once more. Because of a scheduled Rihanna concert at Montreal’s Bell Centre on Wednesday night, the Senators-Habs series will play Games 1 and 2 on back-to-back nights on Thursday and Friday. (If the series goes seven games, the two teams would play a pair of back-to-back contests, as the last two games of the series are scheduled that way as well.)

Bold Prediction: I genuinely have no idea how to think about this one. Between the Canadiens’ late slide and the return of Karlsson; between Price’s potential and Jakob Silfverberg’s surprising season; given the fact that these are two good season-long possession teams — there are so many X factors going into this series that the only thing that seems appropriate is for it to be a weird and wonderful long one. Senators in seven.

Representative Song: In honor of the all-Canadian series, I’ll have to go with “Baba O’Riley,” based on this year’s electrifying CBC playoff montage. (Anyone else notice how much more Karlsson we got than Subban? Controversy!) It made me laugh, it made me cry, it probably made me pregnant. Can we commission these guys to make clips videos of our everyday lives? The way they sync fist pumps with important chords in the music would make even my college years seem noble.

Backstory: These two teams — or former versions of them, anyway — have met three times in the last four postseasons, splitting a pair of seven-game series in the process. (The Caps also won 4-1 in 2011.) Last season’s matchup featured one triple-overtime game and another one that merely went into a single OT. In other words, they’ve definitely been here before. But don’t expect a look-alike of last year’s competition, which saw so many guys sliding to block even the suggestion or hint of an eventual shot that the games at times resembled hockey Pong. (The series was one that many found disgraceful but was really just the dueling game plans of two coaches trying to mask that they didn’t know if they had enough sheer talent to advance.)

This year, both teams have been let loose a little bit more, at least during the regular season. New Caps coach Adam Oates has famously embraced Alex Ovechkin, rather than merely tolerating him as Dale Hunter had. E-mails were sent to members of the Professional Hockey Writers Association in advance of Hart Memorial Trophy voting to remind them that, contrary to what it says on NHL.com, Ovechkin has played on the right wing, not the left, this season; Oates is responsible for the switch. The result has been a revitalized player who finished with 32 goals in 48 games — 23 of which came in the final 23 contests.

As for the Rangers, their play since trading away Marian Gaborik has been so markedly different (and more spread out) that John Tortorella felt moved to comment on the change after a practice earlier this week. (He then turned back into a pumpkin, chastising the media for questioning his relationship with Gaborik before the media had a chance to question his relationship with Gaborik.) The playoffs will of course cause both teams to tamp down their offense in favor of more cautious defense, but the hope remains that we’ll see more end-to-end action than we did last year.

Big Questions: Will Derek Stepan continue to be the Rangers MSVP (most sneakily valuable player)? Will Tortorella be on the ol’ “hot seat” if the Rangers fail to advance past this round? Whose defensive corps is thinner, New York’s without Marc Staal or Washington’s in general? Obligatory question about whether Ovechkin can keep it up???? Will the Rangers, the least-penalized team in the league throughout the regular season, be able to maintain their clean play — or will Washington, with the NHL’s top power play this year, do all that it can to entice New York into the penalty box? Which winsome Swede will ultimately be a bigger factor: Nicklas Backstrom or Henrik Lundqvist?

Fun Fact: An article about Oates’s successful movement of Ovechkin from the left wing to the right contained this tidbit from GM George McPhee: “When we interviewed Adam this summer, he was convinced that he could make [Ovechkin] a better player … Adam had the video and the data to back it up.” (I love the idea of him on a traveling road show with an oviRW.ppt file on a thumb drive — in the movie version, there would be a climactic scene in which he finally gets in front of team management only to realize he left the disk on the counter of a coffee shop, where it was picked up by Ovechkin himself, etc.) Anyway, since anything involving hockey can eventually trace itself to an embarrassing Glen Sather story, we were reminded the Rangers once hired then fired a man whose winning interview steez involved the faxing of handwritten manifestos to league offices. Don’t try this at home.

Bold Prediction: Will this be the series in which every game goes to overtime? There’s an excellent chance. Rangers in seven, because I’m beginning to get tired of being accused of the reverse jinx.

Representative Song: You wake up, the Rangers are facing off against the Capitals in the playoffs, and the radio alarm is playing “I Got You Babe” by Sonny & Cher. (I feel like we genuinely aren’t too far off from Ovi and Maria recording their own version.)