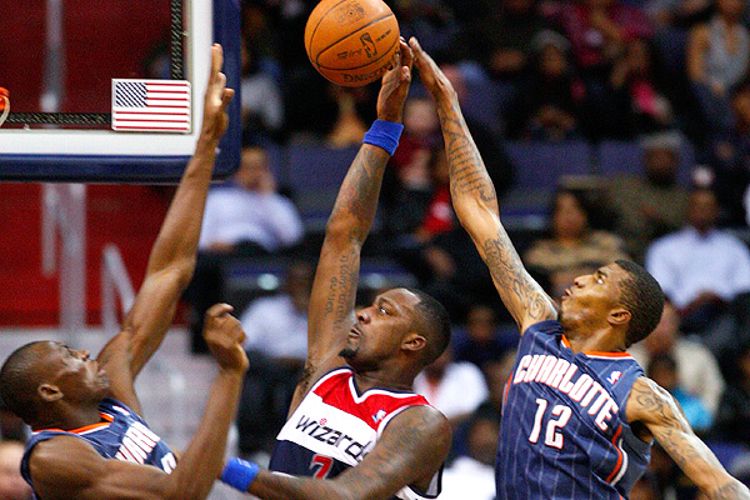 If you’ve been wondering why it’s been almost two days since I published anything on the Washington Wizards and specifically their two fearless leaders, Andray Blatche and JaVale McGee, there’s a very simple explanation. I’ve been working on a TNT pilot called Blatche & McGee. It’s about two crusading D.C. cops by day, shot blockers by night. I’m hoping to draw Dennis Franz out of retirement to play their frazzled boss.

Another reason for the lack of updates is that the Wizards managed to not lose Wednesday night, getting a nice 17-point home win over the Bobcats. However, we’d be remiss if we didn’t check in on the latest with our two favorite D.C. dudes.

Andray Blatche got blocked five (FIVE) times by Tyrus Thomas on Wednesday. This caused Bobcats coach Paul Silas to compare Thomas to Herman Cain (I can’t even … ) and the home Wiz crowd to boo Blatche, no doubt making him feel like the shortest 6-foot-11 dude ever. Still, shout-out to his double-double, which helped the Wizards get the W.

Any week JaVale McGee merely takes a weird passive-aggressive dig at his general manager (on the decision to fire Flip Saunders and replace him with interim boss Randy Wittman: “That’s Ernie’s opinion, and I’m going to let it be Ernie’s opinion”) is a quiet week for the big man.

McGee was no doubt thrilled, then, to see this little anecdote pop up in the Washington Examiner this week: The last time the Wizards had an interim coach (like Wittman is now), it was Ed Tapscott, who held down the bench in 2008-09. During one game that season, Tapscott yanked McGee from the court, prompting the center’s mom, who was in attendance, to shout, “Don’t worry baby. He’ll be gone next year.”

Tune in next week …