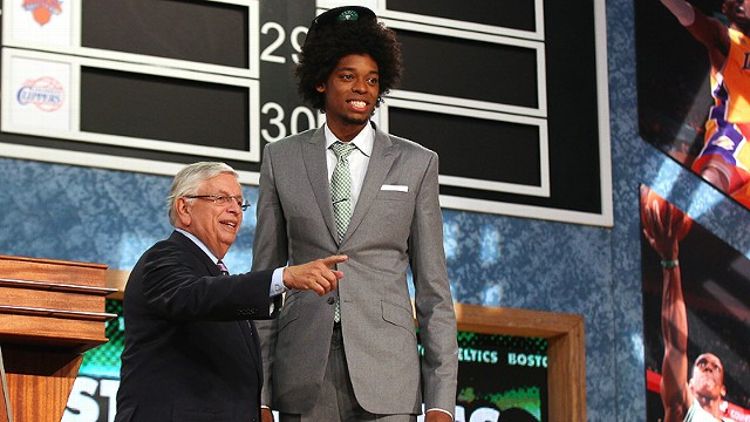 I’m not sure any of us could have predicted who’d get selected in the NBA draft last night, but the talent pool from which the first 14 players were chosen should’ve been familiar. Though there were four internationally born players drafted in the lottery (including the no. 1 overall pick, Anthony Bennett), each of those 14 players played in NCAA programs. Not a single mock draft was spared after last night’s mind-blowing start, but all things considered, lottery teams were still playing it safe with domestic name brands.

Immediately after the lottery, though, there was a noticeable shift. Teams suddenly started bingeing on the exotic. Four of the next five picks were foreign-born players. There were 12 international players selected in the first round; there was a total of four last year. Of the remaining 16 picks in the first round after the lottery, half went to international players. These numbers are extremely impressive, but given the late-game hype of players like Giannis Adetokunbo, Dennis Schroeder, Sergey Karasev, and Lucas Nogueira, and the relative lack of enthusiasm about the domestic talent at the back end of the lottery, why didn’t a single overseas player (one who actually played overseas this past year) crack the hardwood ceiling?

Nogueira and Karasev, selected 16th (Celtics) and 19th (Cavaliers) overall, respectively, followed the typical route of exposure, and thus were familiar entities by draft day. Nogueira, a Nike Hoop Summit alumnus from 2011, has seen his potential scrutinized for the past few years. He faces issues typical of any extremely young, extremely raw, and extremely long center. But even if he doesn’t pan out, his hair has already secured a spot in NBA draft lore. Karasev, though only 19, might have the best résumé of any player in the draft. He played well as part of Russia’s U-19 team two years ago as a 17-year-old, and at 18, he was already a member of the Russian men’s national team, which won the bronze medal in last summer’s Olympic games. Their profiles lacked an enigmatic slant, but they were picked more or less where they were supposed to be.

The cases of Schroeder (no. 17 to the Hawks) and Adetokunbo (no. 15 to the Bucks) are a bit harder to decode. On paper and in theory, their combination of physical tools, unbelievable performances caught on video, and overall mysteriousness could have vaulted them into surprise pick territory à la Dion Waiters in 2012. Schroeder lit up this past Nike Hoops Summit, looking like Darren Collison with Rajon Rondo limb transplants, and he suddenly turned into a potential lottery pick despite not appearing in most mock drafts before April. Adetokunbo was a deus ex machina, descending upon us just as so many other prospects had begun to withdraw. He was put on Earth to save us from this wretched draft. Adetokunbo wasn’t invited to the Hoop Summit despite being fully equipped to go, and maybe that was the best thing that could’ve happened to him. The footage that casual YouTube scouts all fawned over was of Giannis peering over a bunch of eighth-graders, looking like a demigod among toddlers. With rose-colored glasses he looks like the second coming of Durant, but with the lights out, I swear you can see the ghost of Yaroslav Korolev hovering. He’s toeing that line, and unfortunately, we won’t know which side he’ll land on for at least another three years.

In this post-Darko NBA, teams clutch at their old wounds like jilted lovers, attempting to right any of their past wrongs by viewing the international prospect as a prudent financial maneuver in the latter stages, rather than falling in love with his mythology. It’s the product of much stronger international scouting and a distinct fear of landing on the next Nikoloz Tskitishvili land mine. In fact, the insistence of some teams to stash a pick overseas to develop without taking a cap hit factored heavily in the draft order. Adetokunbo, Schroeder, and Karasev all expressed interest in competing for a roster spot right away, as opposed to waiting it out for a few seasons like Ricky Rubio and Tiago Splitter had before. This forced a lot of teams in the lottery into a haphazard cost-benefit analysis that skewed toward the surer domestic product. As rigid as draft tactics have gotten in recent years, mystery still figures prominently in decision-making. For instance, is there really that big of a gulf between Schroeder, who was selected 17th overall, and Myck Kabongo, who went undrafted? Maybe later it turns out Giannis Adetokunbo and Dennis Schroeder are utterly unplayable, but it’s hard to find fault in the teams that selected them at this point. Going all-in on these vessels of unproven potential seems pretty sensible compared to everything else that went down last night.